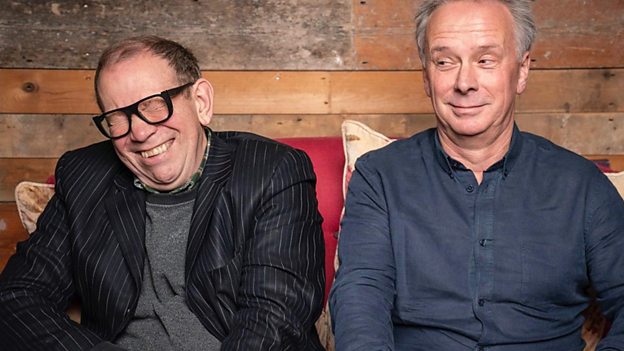 What makes a hit TV show funny? Frankly I’ve no idea, but the people we meet in this series have, so let’s listen to them and learn.Jon Plowman, TV and film producer

Category: Radio 4; Radio 4 Extra; Commissioning; BBC Sounds
Radio 4 and 4 Extra will be celebrating some of the most-loved comedy classics in the coming weeks, hearing from the brains behind some of Britain’s biggest television comedies in a brand new programme What’s Funny About… plus a new one-off Down The Line: Lockdown Special. Cult radio comedy favourites can also be heard again including Cabin Pressure and The Boosh.

In What’s Funny About… TV veterans Jon Plowman and Peter Fincham (pictured L-R) talk to the writers, producers, and performers behind some of the UK’s biggest TV comedies to hear the inside story of how they brought their programmes to the screen. Episodes in the series include Dawn French and Richard Curtis on The Vicar Of Dibley, Armando Iannucci and Rebecca Front on The Thick Of It; Meera Syal and Anil Gupta on Goodness Gracious Me; Jennifer Saunders on Absolutely Fabulous and Hugh Bonneville and John Morton on W1A.

The first episode features Dawn French and Richard Curtis talking about much-loved sitcom The Vicar Of Dibley. They discuss how to make a fundamentally nice character funny; Richard’s curious appetite for writing quite so many weddings; and Dawn’s strangest ever Vicar Of Dibley gig. What’s Funny About… can be heard on Radio 4 Extra and BBC Sounds, new episodes broadcast on Wednesdays at 10.30pm from 13 May. What’s Funny About… is an Expectation Production and the producer is Owen Braben.

In the Absolutely Fabulous episode, Jennifer Saunders tells Peter and Jon: "I wrote it out of necessity more than anything else. Needing to be employed! And it's about being able to write in someone’s voice, and I could write forever as Edina. It was terrifying because I’d never written on my own before, and I’d never written a sitcom or anything that was dramatic or longer than a sketch. So it was kind of frightening. Maybe they should all be kinder to each other? Maybe they should have a dog? I didn’t know what sitcoms had in them. And I just thought, no, I’m going to write it as I would write it."

Tony Pilgrim, Head of Programming for 4 Extra says: "Radio 4 Extra has always provided listeners with treasures from our rich archive - but in these current times comedy is more important than ever. We’ll be delving into our archives to provide some joy to listeners and both Radio 4 and 4 Extra will bring back some of the most-loved radio comedy, as well as brand new programmes celebrating comedy classics.

"What’s Funny About hears from the best comedy minds in the business, and gives listeners deeper insight and behind-the-scenes access to some of the UK’s best TV comedies."

Peter Fincham says: "Jon Plowman gave me my first job in television in the mid-80s. Since then, we’ve both been lucky enough to be involved in some of the best comedy programmes of recent decades. So it seemed entirely natural that if we were going to make a programme together today, it should be all about TV comedy.

"In our programme about W1A, John Morton, its creator, says he thinks that in general comedy doesn’t last very well. That it goes off faster than other things in the larder.

"The truth is that comedy endures longer than almost anything else on television. At its best, great comedy is timeless. And in these difficult days, more and more viewers and listeners are rediscovering the best of TV comedy, and enjoying it afresh. So this is a series that looks back with no anger at all at some wonderful television programmes made by some brilliantly talented people, some of whom are called John.”

Jon Plowman says: “I worked on some of these shows from a distance but it’s always interesting to hear from the people at the heart of a project why they wrote it and then to find out why they think it worked.

"I’ve sometimes been told that trying to take a TV comedy apart to see what makes it work is rather like pulling the wings off a butterfly, or even a Boeing 747. But I think we’ve found with this series that this is far from the case. The things that keep the ship afloat or the plane in the air, or the butterflies making butter are not a mystery, it’s the sheer talent of the writers and performers involved.

"What makes a hit TV show funny? Frankly I’ve no idea, but the people we meet in this series have, so let’s listen to them and learn."

Radio 4 will be broadcasting a one-off lockdown special of Down The Line, the groundbreaking spoof phone-in show hosted by Gary Bellamy and brought to you from the creators of The Fast Show, Paul Whitehouse and Charlie Higson. Down The Line: Lockdown Special stars Rhys Thomas with Amelia Bullmore, Simon Day, Charlie Higson, Lucy Montgomery and Paul Whitehouse and is on BBC Radio 4 and BBC Sounds on Thursday 14 May at 11pm.

Charlie Higson says: "It’s great to be back with this Down The Line one-off special. A spoof radio phone-in show is the perfect project to make in lockdown as all the cast can literally phone their performances in. So we have a great range of characters calling our host, Gary Bellamy, who are as weird, confused, angry and nuts as the callers on any other phone-in show.

"The only sadness is that this is the first Down The Line we’ve made without the inimitable Felix Dexter, whose unique characters were such a big part of the show. Otherwise, all of the original cast - Rhys Thomas, Paul Whitehouse, Lucy Montgomery, Simon Day, Charlie Higson, and Amelia Bulmore are back, as well as guest stars including Harry Enfield, Robert Popper and Geoff Schumann."

Radio cult comedy classics will be broadcast across Radio 4 and 4 Extra, including a chance to hear the first ever series of The Boosh on Radio 4 Extra, following the lives of zookeepers Howard Moon (Julian Barratt) and Vince Noir (Noel Fielding) is broadcast on Saturdays at 10pm from 9 May.

Radio 4 Extra also continues to broadcast comedy from their archives in the regular morning slot including Dad’s Army, The Frankie Howerd Show, and Hancock’s Half Hour as well as another chance to hear Comedy Greats, a series in which Barry Cryer showcases some of the funniest and finest shows broadcast on BBC Radio decade by decade on Saturdays at 9am from 25 April on 4 Extra.

Radio 4 will broadcast the first series of multi award-winning Cabin Pressure on Sundays at 7.15pm from 17 May. Written by and starring John Finnemore alongside Benedict Cumberbatch, Roger Allam, Stephanie Cole, and Ewen MacIntosh, the record-breaking sitcom chronicles life at a tiny (fictional) airline.

There are also a series of classic editions of I’m Sorry I Haven’t A Clue and Just A Minute on BBC Radio 4 and BBC Sounds, whilst Radio 4 Extra is broadcasting episodes of Hancock’s Half Hour.