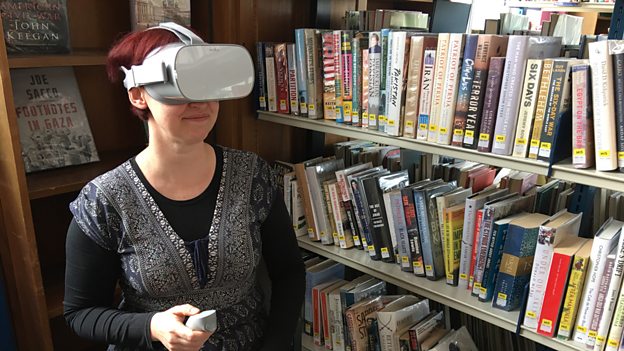 VR headsets are expensive, and only a very small number of people have them at home. That’s why we wanted to bring some of our favourite experiences out on the road.Zillah Watson, Head of BBC VR Hub

Category: Learning; English Regions
The BBC is taking its best virtual reality experiences out on tour this summer, bringing them to people in a wide range of libraries up and down the country.

From early May until late July, people will be able to pop into one of more than 40 local libraries across the UK to try out experiences from the BBC, like Congo VR and 1943 Berlin Blitz, for free.

Working with Libraries Connected and Scottish Library and Information Council, the BBC VR Hub will be taking its VR experiences to a number of libraries in Lancashire this week, including Tarleton, Skelmersdale, Eccleston and Adlington, before moving on to Nuneaton, Leeds, Dundee and a whole host of others across England, Scotland, Wales and Northern Ireland. Fans keen to try out virtual reality from the BBC can find out if their local library is showing on this online schedule, which will be updated each week with details of where the tour is heading next: bbc.co.uk/vrtour

Zillah Watson, head of BBC VR Hub, says: "Virtual reality is an extraordinary way to experience a story, by immersing yourself in it completely you get a huge connection to it. The trouble is that headsets are expensive, and only a very small number of people have them at home. That’s why we wanted to bring some of our favourite experiences out on the road, and by putting them into local libraries across the UK we’re hoping to give everyone the chance to try out virtual reality."

Congo VR
Congo VR is a three-part news documentary series that takes viewers into the heart of the Democratic Republic of the Congo, one of Africa’s most dangerous and beautiful countries. Viewers go on assignment with BBC Africa correspondent Alastair Leithead, and get up close and personal with rare lowland gorillas, journey with the UN in an armoured vehicle to a refugee camp and visit the ruins of former President Mobutu’s palace deep in the jungle.

1943 Berlin Blitz
1943 Berlin Blitz is a powerful film in which viewers join the RAF on a bombing run during the Berlin Blitz. Placed in the footsteps of BBC war reporter Wynford Vaughan-Thomas and sound recordist Reg Pidsley, who genuinely went on this mission in 1943, viewers will experience sitting in the belly of Lancaster bomber ‘F for Freddie’ as VR transports them high over Berlin in the midst of anti-aircraft fire. Wynford’s commentary was one of the most ambitious and dangerous reports to be made during World War Two, and viewers can step into his shoes to experience war reporting as never before.

People Just Do Nothing VR
Some libraries will also be showing People Just Do Nothing VR, a short 360° version of the hit sitcom. Viewers have been kidnapped by Chabuddy G and the Kurupt FM crew, and are sat on the sofa of Steves’ flat while MC Grindah and DJ Beats run through a hit to try and convince you to sign them to your record label.

The online schedule will be updated each week with details of where the VR tour is headed next. In the next two weeks, the BBC’s VR tour will be visiting: