Tom Hollander to star in Us, David Nicholls’ adaptation of his bestselling novel for BBC One 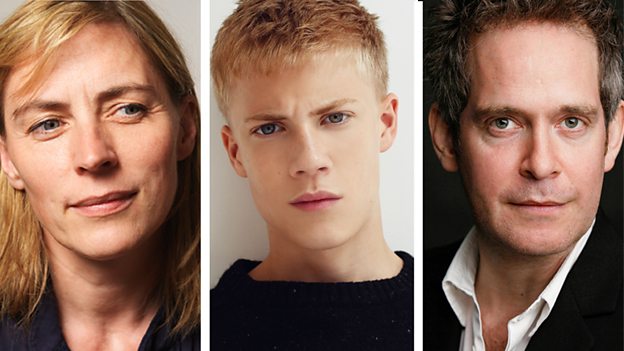 It’s a huge thrill to see the novel come to life, and with such a wonderful cast and production team. We want to make something funny, touching and beautiful, to really explore marriage and family life.David Nicholls

Category: BBC One; Drama; Casting; BBC Studios
Filming has begun for Us, BBC One’s four-part drama adapted by David Nicholls from his hugely popular novel of the same name.

Tom Hollander (Baptiste, The Night Manager) will be joined by Saskia Reeves (Luther, Shetland), Sofie Gråbøl (The Killing, Fortitude), Tom Taylor (Doctor Foster, The Dark Tower), Iain De Caestecker (Agents Of S.H.I.E.L.D, The Fades) and Thaddea Graham (Curfew, The Letter for the King), with casting by Sarah Crowe. It is produced by Drama Republic and Bandstand Productions.

Douglas Petersen (Tom Hollander) is blindsided when his wife Connie (Saskia Reeves) tells him that she’s not sure she wants to be married to him anymore. Agreeing to still go on their planned family grand tour of Europe, Douglas vows to win back the love of his wife and repair his troubled relationship with their son Albie (Tom Taylor).

Reflecting David Nicholls' signature mix of humour and heartbreak, Us brings the Petersens' poignant and often hilarious story to life, taking viewers with them on their once-in-a-lifetime journey through some of the most beautiful cities in the world.

David Nicholls says: “It’s a huge thrill to see the novel come to life, and with such a wonderful cast and production team. We want to make something funny, touching and beautiful, to really explore marriage and family life, all against this incredible backdrop.”

Tom Hollander and Hannah Pescod say: “We are delighted to be working with Drama Republic and the great David Nicholls in bringing his beautiful novel to BBC One. The trials of the Petersens will strike a chord with many - a family tale for our times.”

Piers Wenger, Controller of BBC Drama, says: “We feel so honoured to be bringing David’s beautiful novel to BBC One and to have the brilliant Tom Hollander and Saskia Reeves playing the leading roles. We are thrilled to work with David and Drama Republic once again and also with Bandstand Productions on their debut drama for the BBC.”

Greg Brenman and Roanna Benn, Executive Producers for Drama Republic, say: “David Nicholls is a unique and rare talent who miraculously manages to intertwine profound emotion with full-on humour. This glorious adaptation has attracted an exceptional cast in Tom Hollander, Saskia Reeves and Sofie Gråbøl. We couldn’t be more excited to begin filming.”

Us is executive produced by Greg Brenman and Roanna Benn for Drama Republic, Tom Hollander and Hannah Pescod for Bandstand Productions, Jo McClellan for BBC One and David Nicholls. It is directed by Geoffrey Sax and distributed internationally by BBC Studios. Filming will take place in London, Amsterdam, Venice, Barcelona and Paris.

This release initially stated that Lisa Siwe was directing, however Geoffrey Sax took over the role.