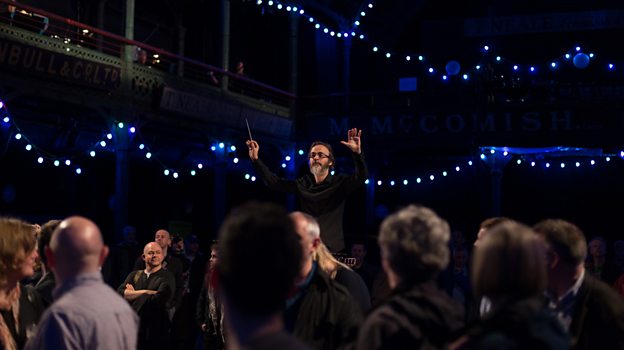 Tectonics Glasgow is an amazing and often eye-opening opportunity to witness what is new and experimental in our musical worldDominic Parker, Director, BBC SSO

Category: Radio 3; Scotland; Orchestras; BBC Sounds; BBC Scotland
Tectonics Glasgow, the BBC Scottish Symphony Orchestra’s festival of new and experimental music, returns this May to once again push the boundaries of what music can be.

The festival brings together international and local artists, composers and performers from the worlds of classical, experimental, rock, noise, sound art, dance and visual art for two days in Glasgow on 4 and 5 May.

Critically acclaimed harpsichord player Mahan Esfahani is a featured artist throughout the first day of the festival. He presents recent works by composers Anahita Abbasi from Iran, Miroslav Srnka from the Czech Republic and America’s George Lewis, and closes day one of the festival by paying homage to one of the great pioneers of electronic music, with a work for tape and harpsichord by Luc Ferrari. The closing spot on Sunday features a set from Mik Quantius and legendary Scratch Orchestra member Dave Smith gives a rare performance of his work Diabolus Apocalypsis.

There are World Premieres for the BBC SSO of works from Martin Arnold and Sarah Davachi, two BBC Commissions from Christian Wolff and Juliana Hodkinson, and a co-commission with WDR Cologne and the BBC from Mauro Lanza. Plus the UK Premieres of Jennifer Walshe’s The Site Of An Investigation and Andrew Hamilton’s c.

Tectonics Glasgow sees musical disciplines from Scotland and across the globe collide and collaborate. Brighde Chaimbeul, a piper from the Isle of Skye, performs a new work by fellow Scot Genevieve Murphy, while American percussionists Joey Baron and Robyn Schulkowsky join the BBC SSO to perform a World Premiere by Christian Wolff.

Vocalist Nichola Scrutton and clarinettist Alex South collaborate as a performance duo exploring the use of breath as an improvising tool, and Andrew Paine performs a set using electronics and tapes featuring Kevin McCarvel. Plus Drew McDowall creates a live re-interpretation of the 1998 album Time Machines.

Lucie Vítková is in residence for the weekend with her installation Makeup Scores: Environmental Music. The work features scores drawn with old or expired make-up performed by Vítková with Maya Verlaak, Suze Whites and Jorge Boehringer.

The majority of performances will be recorded for future broadcast on BBC Radio 3.

Tectonics Glasgow is once again curated by the BBC SSO’s Principal Guest Conductor Ilan Volkov (pictured) and by Alasdair Campbell, Director of Counterflows.

Ilan Volkov says: “Tectonics Glasgow Festival is the highlight of my year and has really grown since we started in 2013. The festival of course keeps changing, but its main strength is showing a diverse range of new music from classical composers using notation, improvisers without any notation, to electronic music, sound art and performance art as well.”

Director of the BBC SSO, Dominic Parker, says: “Tectonics Glasgow is an amazing and often eye-opening opportunity to witness what is new and experimental in our musical world, and gathers strength, momentum and growing anticipation each year.”