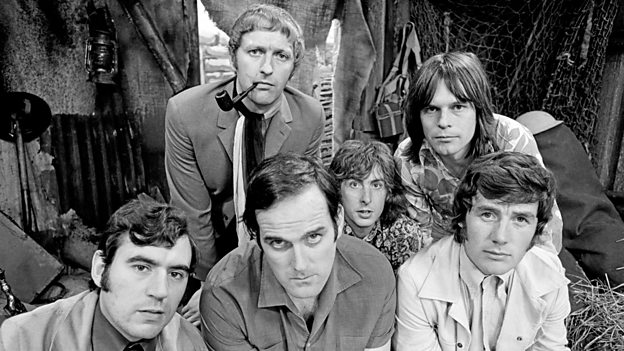 These archives are comedy history Holy Grails! They highlight that long-standing BBC reputation of being the vital place that champions pioneering new talents.Shane Allen

Category: BBC One; Comedy; Corporate
A new archive of photos and documents has been uncovered which illustrates rarely seen moments from the making of Monty Python, as the ground-breaking comedy show celebrates its 50th anniversary.

Monty Python’s Flying Circus first aired on 5 October 1969 on BBC One and went on to run for four series.

The images from the Monty Python Archive, lovingly and painstakingly restored by the BBC Photo Archive team and held in the BBC Photo Archive, include behind-the-scenes photos of the group, made up of John Cleese, Terry Gilliam, Eric Idle, Terry Jones, Michael Palin, and the late Graham Chapman. Dated between 1969 and 1974, the rarely seen images show them on set filming sketches including The Ministry of Silly Walks, And Now for Something Completely Different and The Attila the Hun Show.

The archive release also includes a 1969 audience research report revealing viewers’ initial reaction to the series and its “delicious sense of the ridiculous”, as well as a memo from the then Head of Comedy requesting the “peculiar titles” be changed.

Shane Allen, BBC Controller Comedy Commissioning, says: “These archives are comedy history Holy Grails! They highlight that long-standing BBC reputation of being the vital place that champions pioneering new talents. The Pythons tore up the rule book of comedy grammar, conventions and traditions, but thankfully the support for creative freedom won the day and has certainly paid off in the long run as audiences continue to celebrate and revere their enormous impact on comedy.”

BBC History has also collaborated with the Ministry of Stories to introduce children aged 11-14 to Monty Python and released a teaching resource to support young people across the country to write their own comedy sketches.

As part of the project, pupils from Swanlea School, in Whitechapel, East London, got to grips with Hell’s Grannies and The Ministry of Silly Walks to create new comedy inspired by Monty Python. BBC History then produced their final sketches, performed by professional actors and under the guidance of writer/actress Gem Ahmet.

Robert Seatter, Head of BBC History, says: “When Monty Python’s Flying Circus began in 1969 it radically changed the face of TV comedy. By introducing these famous Python sketches to today’s young people we want to change it all over again - with the same spirit of surreal invention!”

Ministry of Stories champions the writer in every child. It was founded by Lucy Macnab, Ben Payne and best-selling author Nick Hornby, who wanted to create a space for young people in East London to become authors. Through innovative writing clubs, small-group mentoring and fun writing resources, it helps young people discover and realise their own creative potential.

The material in the collection should be viewed in the context and with the understanding that it reflects the attitudes and standards of its own era - not those of today.