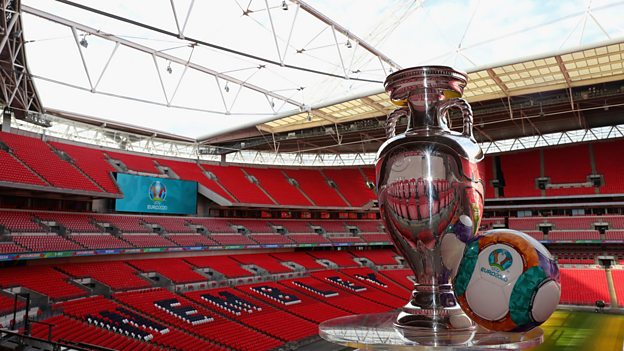 This is a strong selection of games for the BBC, that takes in England and Wales’ opening fixtures, and the first two knock-out games that both these home countries would play.Philip Bernie

Category: Sport; Commissioning
Following last Saturday’s UEFA Euro 2020 draw in Bucharest, the BBC and ITV can confirm which broadcaster will show their chosen fixtures from next summer’s tournament which will be held across 12 countries to celebrate 60 years of European Championship competition.

The BBC will show England’s opening group game, a must-see rematch against Croatia (Sunday, June 14), who defeated Gareth Southgate’s side in the 2018 World Cup semi-final. Wales’ first two group fixtures against Switzerland and Turkey are live on the BBC as Ryan Giggs’ squad aim to recreate the heroics of 2016 when they reached the semi-finals. Should both teams progress through their groups, then the BBC will show their knockout games in both the Round of 16 and quarter-finals - the BBC has first choice in both rounds.

The BBC will also be showing the opening game of the tournament in Rome as Italy face Turkey on Friday, June 12 followed by coverage of some the biggest teams in Europe, including current holders Portugal, World champions France, Germany, Belgium and the Netherlands. Scotland’s opening game and Northern Ireland’s second group game will also be live on the BBC, if they qualify.

Philip Bernie, BBC Head of TV Sport, says: “This is a strong selection of games for the BBC, that takes in England and Wales’ opening fixtures, and the first two knock-out games that both these home countries would play. Away from the home nations, we’re delighted to be able to show viewers key games for some of the giants of European football. The BBC will once again be committed to delivering a 24/7 service to our audiences across TV, radio and online ensuring every key moment is unmissable.”

ITV will show England’s last two group games, Wales’ final game of Group A against Italy and have the first pick of the semi-finals. Both BBC and ITV will show the final.

Niall Sloane, ITV Director of Sport, says: “ITV will be bringing to viewers comprehensive live coverage of some of the biggest matches in what promises to be a special tournament. Euro 2020 looks set to dominate next summer with so many matches being played in Britain and Ireland and the involvement of England, Wales and hopefully more home nations. Our team is looking forward to offering viewers all the action and expert insight across TV, online and social media to make the most of what promises to be a memorable tournament.”