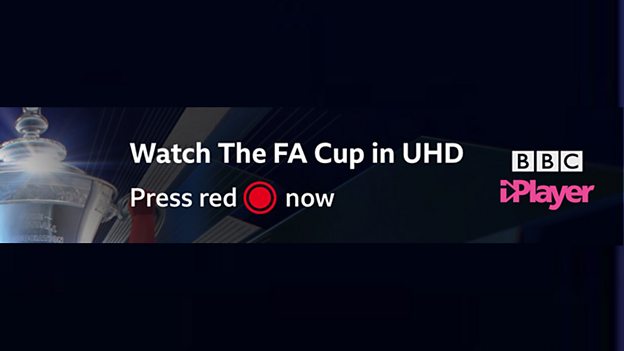 This is an excellent example of how we’re reinventing BBC iPlayer, making it an even better place for watching live events and giving people the best programmes to enjoy in the best possible quality.Dan Taylor-Watt, Head of BBC iPlayer

Those watching on compatible Ultra HD TVs can watch the live stream on BBC iPlayer by pressing the Red Button during the BBC’s coverage, or directly through the BBC iPlayer app on their TV.

This is the BBC’s latest Ultra HD trial as it continues to pioneer next-generation streaming for UK audiences. BBC iPlayer is the only streaming service in the UK to offer people live Ultra HD and HDR programmes. Its previous trials have proved incredibly popular with audiences, and includes:

Due to the experimental nature of the FA Cup trial and the high bandwidth required, there will be a cap of tens of thousands of people watching live at a time, as there was during the World Cup. Audiences will need an internet connection of at least 40Mbit per second for full 3840 pixel Ultra HD or 20Mbit per second for 2560 pixel Ultra HD. Wi-Fi performance can vary greatly, so a wired internet connection to the TV may provide a more consistent Ultra HD experience. Footage will be played at 50 frames per second.

Dan Taylor-Watt, Head of BBC iPlayer, says: “Our Ultra HD and HDR programmes have been streamed millions of times on BBC iPlayer, making them some of the most popular Ultra HD programmes in the world, and BBC iPlayer is one of the only streaming services to offer them live in such high quality.

"It’s an excellent example of how we’re reinventing BBC iPlayer, making it an even better place for watching live events, and giving people the best programmes to enjoy in the best possible quality.”

Phil Layton, Head of Broadcast & Connected Systems, BBC R&D, says: “As Ultra HD becomes increasingly popular in the future, the BBC is making sure nobody is left behind. Our research has already provided a highly effective way for free-to-air broadcasters to put HDR into their Ultra HD programmes, and we’re working on a range of projects to make Ultra HD even better for audiences and the industry.”

As the UK Internet evolves, the BBC believes this will be the main way people watch Ultra HD programmes in the future. The aim of these trials and other projects at the BBC is to improve the quality of Ultra HD streaming, especially live streaming, to meet future demand. They also help the development and adoption of open technology across the industry, ensuring that Ultra HD TV will be available free to air to as many people as possible.

The BBC played a similar role ensuring viewers were not left behind by the move to HDTV over a decade ago. Its early, pioneering work helped bring forward the launch of HD on terrestrial TV by three years, delivering a total economic benefit to the UK of £77-152m. Current projects shaping the future of mainstream Ultra HD TV include: