Chris Mason is the next host of Radio 4’s Any Questions? 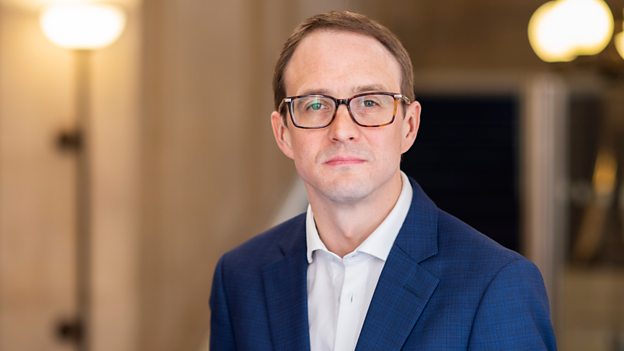 I’m beyond excited to be the next host of Any Questions? To be taking over from someone called Dimbleby of the broadcasting dynasty is pinch yourself stuff.Chris Mason

From this autumn Chris will host Radio 4’s weekly debate programme. Each Friday evening a panel of people from the world of politics, media and elsewhere answer questions on the biggest topics of the week from an audience in a different part of the UK.

Jonathan Dimbleby, who hosted the programme for thirty two years, stepped down in June.

Chris Mason says: “I’m beyond excited to be the next host of Any Questions? To be taking over from someone called Dimbleby of the broadcasting dynasty is pinch yourself stuff. There isn’t a better point in my lifetime to take on this role. I believe passionately it’s the job of the BBC to scrutinise, allow audiences to ask questions of politicians and to have serious but informal conversations so that those in power can be seen in three dimensions. On a discussion programme like Any Questions? audiences and listeners can understand not just what someone thinks but why they think that way. That isn’t always possible in other places but it’s vital in today’s battle of ideas. It aids political conversation and informs what we all understand about what’s happening in the UK and around the world.”

Mohit Bakaya, Controller of Radio 4, says: “Chris is a first class political correspondent and, for some years now, his ability to interpret and explain the complexities of what’s happening in our fast changing political landscape has made him one of our most trusted and insightful journalists. He approaches Westminster with the eye of an ‘outsider’ which makes him well placed to connect with audiences around the country. As we face another period of political uncertainty, Any Questions? and its role in giving people the chance to ask questions of our politicians is as vital as ever. It was a presenting role sought after by a number of brilliant broadcasters that I have the highest regard for. I’m delighted Chris is the new host.”

Chris Mason is a Political Correspondent for BBC News and is regularly seen across BBC News programming. He sometimes presents BBC Breakfast and on Radio 4 he has presented programmes such as The County Vs The City and Could The PM Have A Brummie Accent?’ He is one of the hosts of the podcast and television programme Brexitcast.

Chris will present Any Questions? from 18 October.