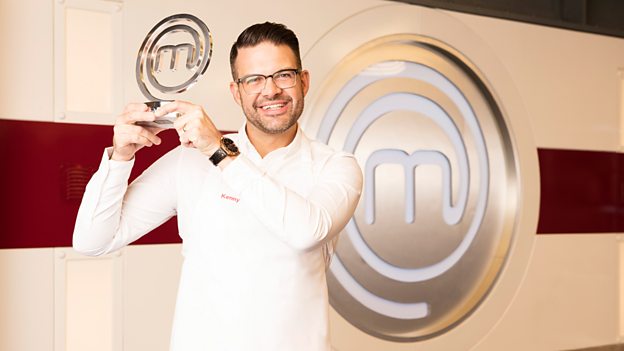 I am just blown away. I have put my heart and soul into it and it’s been an absolute pleasure. It’s up there with the happiest days of my life!Kenny Tutt, MasterChef 2018 Champion

Category: BBC One; Entertainment; Factual
Bank manager and father of two, Kenny Tutt (36) has been crowned MasterChef 2018 Champion, it was announced today, becoming the fourteenth amateur cook to claim the title.

Facing competition from 55 other determined contestants, through seven gruelling weeks of culinary challenges and a close final cook-off, Kenny was awarded the MasterChef 2018 trophy by judges John Torode and Gregg Wallace.

On winning, an emotional Kenny says: “It is a really special day. I have learnt so much and I couldn’t appreciate it any more. Today was 100% my best cooking in the entire competition everything just fell into place. I am just blown away. I have put my heart and soul into it and it’s been an absolute pleasure. It’s up there with the happiest days of my life!”

The judges congratulated Kenny on his ‘crowd-pleasing’ winning dishes.

John Torode says: “I think Kenny’s journey has been extraordinary. He has come a long way. His food has got more and more refined and his main course was make-my-heart-thump fantastic!”

On his winning menu, he says: “Every single thing he cooked he poured his heart into. He nailed it.”

Speaking about Kenny’s win, Gregg Wallace says: “Today we watched Kenny coming of age. We have just witnessed Kenny having his best round on MasterChef and he saved it for the final. His starter was a stunningly beautiful dish, it was quality restaurant-style perfection and his main course was even better.”

He adds: “Kenny turned this competition on its head. What a brilliant champion.”

Ahead of Gregg announcing the winner John said: “This has been a very special competition and you three have become three very special cooks. For me it has been an absolute privilege to watch you grow, to change and to taste your food. You three care.”

Kenny fought his way from 55 amateur cooks through to the final week and, along with the other incredibly talented finalists, Nawamin Pinpathomrat (28) and David Crichton (41), was pushed to show the judges the skills, creative flair and perseverance needed to succeed at the highest level in the intense final challenges.

In an extremely demanding final week, MasterChef fans have seen Kenny travel to Carlton Towers in rural Yorkshire, to the home of the Lord and Lady Fitzalan-Howard and family and under the guidance of Michelin-starred Tommy Banks cook a lunch for some of Yorkshire’s finest local producers and farmers; travel to Peru to cook in Lima’s major fish market, work with Chef Virgilio Martínez at his world-renowned restaurant Central (which regularly ranks among the world’s top five) and create a special dinner for a host of Peruvian chefs at the top of their game including Gaston Acurio, Roberto Grau, Pia Leon and Malena Martinez, before heading back to London to be mentored by and cook for one of the leading culinary innovator’s, internationally renowned chef Ashley Palmer-Watts.

Kenny started cooking from a young age and loved watching his mum cooking in the kitchen. It was when he left school and started travelling and tasting foods from different cultures that he became interested in food which is steeped in history and culture.

Having been persuaded to apply for the show by his wife Lucy, Kenny reflects on the win, saying: “This has changed me as a person and has really lit a fire in me.”

Looking back on his time in the competition, Kenny says: “No one prepares you for how hard it is in that kitchen working to strict times under the watchful eyes of John and Gregg.They are cracking guys and it was great to get the chance to cook for them both.”

On his future plans he says: “I would love to get more young people cooking. I always love to get my girls involved in the kitchen, and my eldest Emily just loves to cook and taste the food. Cooking teaches so much, from science to math’s, and allows children to be creative and proud. I would also love to write about food and want to put together some great food events, be it supper clubs or private dining. The ultimate ambition would be to run a high-end gastro Pub/B&B.”

Kenny grew up in London, Hove and Pulborough and now lives in Worthing West Sussex with his wife, Lucy and two children Emily (3) and Grace (10 months).