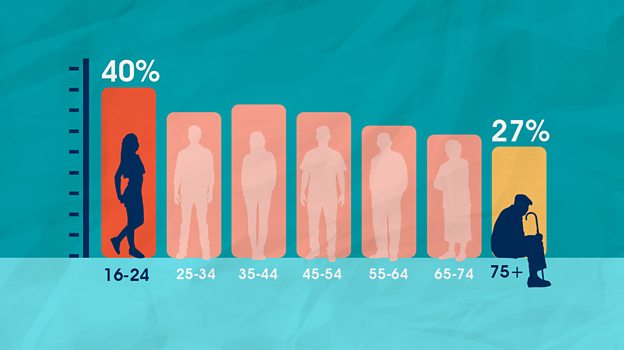 We were staggered by the huge numbers of people taking part in our survey. This research shows we need to take loneliness seriously in all age groups.Claudia Hammond

Category: Radio 4
BBC Radio 4 has today announced the results of The Loneliness Experiment, a nationwide survey conducted by BBC Radio 4’s All In The Mind in collaboration with Wellcome Collection. It is the largest survey into the issue of loneliness to date.

The survey results indicate that 16-24 year olds experience loneliness more often and more intensely than any other age group. 40% of respondents aged 16-24 reported feeling lonely often or very often, while only 29% of people aged 65-74 and 27% of people aged over 75 said the same.

Over 55,000 people aged 16 years and over took part in the survey exploring attitudes and personal experiences of loneliness, making it the biggest survey of its kind. The survey was developed by academics at the University of Manchester, Brunel University London, and the University of Exeter, and supported by a grant from Wellcome.

Of the findings, Claudia Hammond, presenter of Radio 4’s All in the Mind says: “The topic of loneliness is now receiving a great deal of attention and political prominence as demonstrated by its inclusion in Tracey Crouch’s ministerial portfolio and the recommendations from The Jo Cox Loneliness Commission. We were staggered by the huge numbers of people taking part in our survey. This research shows we need to take loneliness seriously in all age groups. We know that most loneliness is temporary, but we need to find ways to prevent it from becoming chronic.”

Pamela Qualter, Professor of Psychology at the University of Manchester, who led the study, says: "The response to the BBC Loneliness Experiment has been significant. People have provided valuable insights into when and how loneliness is experienced, how it relates to age, being alone, caring responsibilities, employability, and discrimination. For me, the most interesting findings relate to the stigma of loneliness and the varied solutions people had to overcome loneliness. Those findings suggest that we need to be kinder to ourselves when we feel disconnected from others, but also that there is a whole toolkit of potential solutions that we can try."

An episode of All In The Mind, recorded in front of a live audience at Wellcome Collection and broadcast on BBC Radio 4 at 8pm, Monday 1 October 2018, will delve further into the results of the survey. The programme features singer Jazz Morley, poet Dalgit Nagra, and philosopher Julian Baggini, alongside academics Professor Pamela Qualter and Professor Christina Victor.

A series titled the Anatomy of Loneliness will break down the research into three programmes. Tuesday 2 October focuses on loneliness in both younger and older people, examining factors which might explain why younger people are reporting higher and more intense levels of loneliness. Claudia speaks to Sophie Andrews, CEO of Silverline, and Sarah Warren of Youth Focus North East. Professor Barbara Taylor from Queen Mary College London studies the history of loneliness and solitude, explaining how attitudes have changed significantly through time.

On 9 October the programme looks at how friendship, personality and social media impact loneliness. Professor of Psychology Ken Rotenburg from Keele University investigates how the capacity to trust others impacts loneliness, and Rebecca Nowland from the University of Central Lancashire analyses data on social media and loneliness. Researchers Professor Louise Arsenault and Dr Tim Matthews from the Institute of Psychiatry reveal how bullying as a child is a risk factor for loneliness.

The third episode on 16 October asks how long term loneliness can lead to health problems, poor sleep and examines the genetics of loneliness. Professor Manuela Barreto from Exeter University analyses the BBC Loneliness Experiment data to discover that Britain remains one of the loneliest countries. Claudia talks to the Minister whose role is to try and tackle loneliness, Tracey Crouch.

Inspired by true stories of loneliness, and working with academics supported by Wellcome and the BBC Loneliness Experiment - Me Myself I, a moving, original drama of three separate but interlinked stories will broadcast on Saturday 5 October starring Siobhan Finneran, Sue Johnston, and Millie Gibson.

A series of seven All In The Mind podcasts titled How You Can Feel Less Lonely will be released between 2 and 8 October in which Claudia Hammond and Professor Pamela Qualter discuss the top seven solutions to loneliness which emerged from the survey.

About The Loneliness Experiment

The public were invited to take part in an online survey, which took around 40 minutes to complete. The survey asked respondents to give their opinions and record their experiences of loneliness and related topics, including friendship, relationships, and the use of technology - as well as recording lifestyle and background information.

This was a self-selecting sample, so people experiencing loneliness might have been more attracted to take part, inflating reported levels of loneliness. The proportions in each age group are similar to other surveys.

The Loneliness Experiment is the second collaboration between BBC Radio 4 and Wellcome, following on from the Rest Test in 2016.