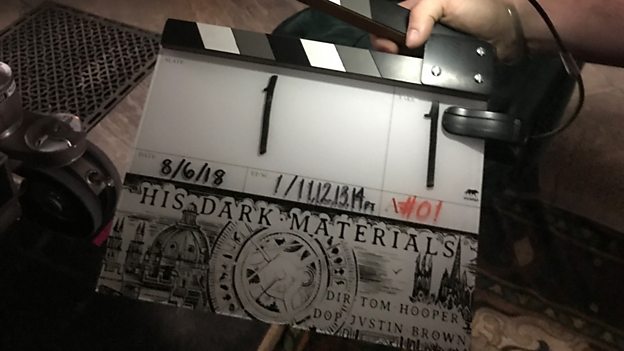 I’m delighted that the production is under way, and I’m looking forward immensely to seeing how it looks. Bad Wolf has assembled a wonderful cast and I’m sure every HDM reader is as keen as I am to see it all coming together.Philip Pullman

Dafne Keen takes on the lead role of Lyra, the young protagonist of the story who lives in Jordan College, Oxford. Placed there at the request of her Uncle, Lord Asriel (James McAvoy) she lives a sheltered life amongst the scholars and college staff while under the watchful protection of The Master (Clarke Peters) and Librarian Scholar Charles (Ian Gelder).

When the glamorous and mesmeric Mrs Coulter (Ruth Wilson) enters Lyra’s life she embarks upon a dangerous journey of discovery from Oxford to London. Here she meets Father MacPhail (Will Keen), Lord Boreal (Ariyon Bakare) and journalist Adele Starminster (Georgina Campbell) at a glittering society party where she first hears about the sinister General Oblation Board.

Once in the North she meets charismatic aeronaut and adventurer Lee Scoresby (Lin-Manuel Miranda) who joins them on their epic journey and who becomes one of Lyra’s closest allies.

Philip Pullman says: “I’m delighted that the production is under way, and I’m looking forward immensely to seeing how it looks. Bad Wolf has assembled a wonderful cast and I’m sure every HDM reader is as keen as I am to see it all coming together.”

Piers Wenger, Controller of BBC Drama, says: “The vast, complex and deeply imaginative landscape of Philip’s novels requires a world class but quintessentially British band of creatives to bring them to life. The BBC is proud and privileged to be the host to such visionaries. Thank you to Jane, Jack, Dan, Joel and Tom and of course to Philip for entrusting us with their work and sharing the journey of seeing His Dark Materials come to life”.

Bad Wolf founder and Executive Producer, Jane Tranter says: “The calibre of our cast and directors is a testament to the brilliance of Jack Thorne’s scripts and also the sheer bravura, depth and imagination of Philip Pullman’s original novels. Our determination is to sound every note of the books in a series that will fully explore the many worlds and concepts in Philip’s work. Bad Wolf has assembled a world class production team at Wolf Studios Wales in Cardiff who will bring Philip’s incredible works to life for a whole new audience.”

Jack Thorne (Harry Potter and the Cursed Child, This is England ’88) is a Bafta, Tony and Olivier Award winning screenwriter and playwright.

Thorne says: “His Dark Materials are the most beautiful set of books, taking us into a world of constant imagination. Reading them I was a massive fan, in adapting them I've increasingly felt in awe of them. It's the constant invention, the way the story never sits still, and that the characters constantly surprise you. It's been a joy being part of a creative team for this; from Tom's incredible analytic mind and amazing eye, to Joel's beautiful world building, to everyone else involved. And then there's the cast, which has proved to be the cast of dreams, we are so lucky to have been able to entice them in.”

Tom Hooper (The King’s Speech, Les Miserables) will lead as director and helm the first two episodes with Dawn Shadforth (Danny Boyle’s Trust, Kylie Minogue’s Can’t Get You Out of My Head) directing episode three and Otto Bathurst (Robin Hood [2018], Peaky Blinders) directing four and five, with other directors to be announced.

Production Designer Joel Collins (Black Mirror) says: "I wanted to be part of a show that would challenge every bone in my body. I was looking for something that would be a true test of my mettle. The hardest thing in fantasy is trying to show a mass group of people what they’ve only previously seen in their minds.”

In its first foray into British television, New Line Cinema is producing the series with Bad Wolf for BBC One.

The design team is led by Joel Collins (Black Mirror, The Hitchhiker’s Guide to the Galaxy) with costumes designed by Caroline McCall (Downton Abbey, Hyde Park on Hudson) and hair and make-up design being led by Pamela Haddock (The Terror, Sherlock). Director of Photography for block one is Justin Brown (The End of the F***ing World, Sixteen) and casting director is Kathleen Crawford (I, Daniel Blake, Filth).

Framestore takes the role of VFX creative partner on the show: managing and executing VFX throughout, and working closely with the production team to ensure the awe-inspiring work can be achieved on budget, and on time.

Michelle Martin, Head of Television, Framestore says: "We could not be more excited to partner on His Dark Materials, a televisual event of truly epic proportion. It’s a hugely ambitious project, but one we at Framestore take on confidently, knowing our award-winning teams will successfully see it through."

His Dark Materials is produced by Bad Wolf and New Line Cinema for BBC One in association with BBC Studios Distribution and Anton Capital Entertainment, S.C.A. The series will be filmed in Cardiff at Wolf Studios Wales.

His Dark Materials is one of the supreme works of imaginative fiction for both children and adults published in the 20th century. After series one, which covers the first instalment of Northern Lights, the story continues in The Subtle Knife where Lyra is joined on her journey by Will, a boy who possesses a knife that can cut windows between worlds. As Lyra learns the truth about her parents and her prophesied destiny, the two young people are caught up in a war against celestial powers that ranges across many worlds and leads to a thrilling conclusion in The Amber Spyglass.

His Dark Materials has been published in more than 40 languages and has sold worldwide close to 18 million copies.

Since first publication in 1995 of Northern Lights, the three books have been acclaimed worldwide and have won many awards. In 2001 The Amber Spyglass was the first and only children’s book to win the Whitbread (now Costa) Book of the Year Award, in 2007 Northern Lights won the Carnegie of Carnegies and in 2005 Pullman was awarded by the Swedish Arts Council, the children’s literature equivalent of the Nobel Prize, The Astrid Lindgren Memorial Award.

Nicholas Hytner’s stage production of His Dark Materials was produced in two parts at the National Theatre in 2003-4. In 2006 New Line released a film of The Golden Compass starring Nicole Kidman, Daniel Craig and Dakota Blue Richards as Lyra.

Bad Wolf is a UK/US production company founded by Jane Tranter and Julie Gardner and co-sited in South Wales and Los Angeles. The company is responsible for co-producing award-winning The Night Of for HBO and A Discovery Of Witches for Sky One. His Dark Materials is New Line Cinema’s first move into British television.

BBC Studios is the international distributor for His Dark Materials.