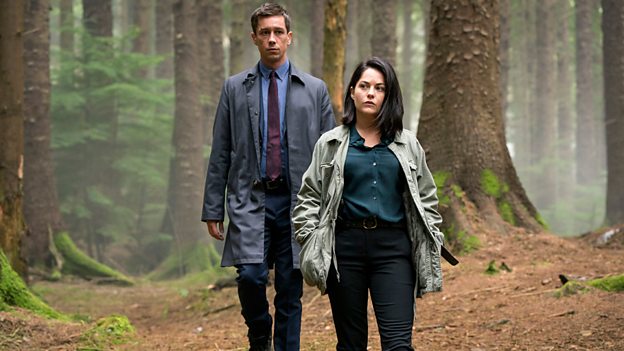 I was so delighted to have been asked to adapt Tana French’s rich, thrilling novels In The Woods and The Likeness and from them create the complex, strange world of Dublin Murders.Sarah Phelps

Dublin Murders is drawn from Tana French’s internationally bestselling Dublin Murder Squad novels. Each book is led by a different detective from the same team and their signature is an intense emotional connection between cop and crime.

This eight-part series is created and written by Sarah Phelps (And Then There Were None; Ordeal by Innocence) and blends the first two novels, In the Woods and The Likeness to deliver a dark psychological mystery with a tap root that drops deep down into Ireland’s past, foreshadows the future and brings insight to its present.

This series, set during the height of the Celtic Tiger financial boom of the millennium, will focus on two murder investigations led by ambitious and charismatic Detectives Rob Reilly and Cassie Maddox. The victims - a young talented ballerina who is found dead on an ancient stone altar; and a vivacious free-spirited woman, who is found stabbed in a roofless famine cottage - are seemingly unrelated, but as we will discover, are actually knitted together by powerful shared themes - the macabre ‘red in tooth and claw’ elements of both stories, and their heart-thumping psychological thriller qualities.

Lead director Saul Dibb brings a cinematic vision to the production, opening the series with ambition and flare and casting in depth from a richly talented pool of Irish actors.

Killian Scott says: "I couldn’t be more delighted to join the creative team behind Dublin Murders. Sarah Phelps has beautifully adapted Tana French’s compelling novels into a complex and dark exploration of memory, identity and the potentially devastating consequences of pursuing truth. The chance to stumble into this world alongside the wonderful Sarah Greene and under the guidance of our brilliant directors.”

Sarah Greene says: “I’m delighted to be cast in Dublin Murders. To work alongside such talented people as Killian Scott, and the entire creative team is a joy. The writing is brilliant and dark and it’s thrilling to give Tana French’s words a new life on screen through the wonderful Sarah Phelps.”

Sarah Phelps, Writer and Executive Producer, says: "I was so delighted to have been asked to adapt Tana French’s rich, thrilling novels In The Woods and The Likeness and from them create the complex, strange world of Dublin Murders. I’m so excited and proud to see my scripts coming to life under the guidance our brilliant directors Saul Dibb, John Hayes and Rebecca Gatward and I'm in total awe of our peerless cast of blazing Irish talent.”

Saul Dibb, Lead Director and Executive Producer, says: “Writers as good as Sarah Phelps are rare and I want people to be as excited to watch Dublin Murders as I was to first read her scripts - with each episode the powerful, gripping, atmospheric, brilliantly acted mini-movie they deserve. Helping me in this task are some of the most talented creative team and cast I’ve ever had the luck to work with, not least our two brilliant leads Sarah Greene and Killian Scott.”

Elizabeth Kilgarriff, BBC, Executive Producer, says: “It is fantastic to be working alongside the brilliant Sarah Phelps again with this dark, timely and gripping adaptation of Tana French's compelling novels. With Killian Scott and Sarah Greene leading this talented Irish cast, Dublin Murders is set to be a distinctive and thrilling new crime series for the BBC audience."

Dublin Murders has a majority Irish cast that includes Tom Vaughan-Lawlor as Frank supported by Moe Dunford as Sam, Leah McNamara as Rosalind, Ian Kenny as Phelan, Eugene O’Hare as Quigley, Jonny Holden as Damien with Conleth Hill as O Kelly and Peter McDonald as Jonathan.

The series is produced by Euston Films, Element Pictures and Veritas Entertainment Group for BBC One, Starz and RTÉ with support from Northern Ireland Screen.

Kate Harwood, Euston Films, Executive Producer, says: “It’s been a long-held dream to bring Tana French’s superb novels to screen and with Sarah Phelps’s phenomenal imagination and peerless dramatic realisation we are forging a fresh take on the psychological detective show. With brilliant Irish talent burning up the screen in a production opened by Saul Dibb I think we’re in for powerful viewing.”

Ed Guiney, Element Pictures Executive Producer, says: “We are absolutely delighted to be part of bringing Tana French’s utterly absorbing and highly evocative Dublin set thrillers to the screen. In Sarah Phelps and Saul Dibb, our amazing cast and crew and our friends at Euston, Veritas, BBC and Starz, we have incredible talent guiding this exciting adaptation.”

Alan Gasmer and Peter Jaysen, Veritas Entertainment Executive Producers, says: “Sarah Phelps' brilliant television adaptation of Tana French’s celebrated novels directed by Saul Dibb will be a fresh look at the crime genre that we are proud to produce with our friends at Euston Films, Element, Fremantle, BBC and Starz.”

The 8x60’ series is produced by Carmel Maloney, the lead director is Saul Dibb (The Duchess, Suite Francaise, NW), supported by John Hayes (Bancroft) and Rebecca Gatward (Shetland). The series was commissioned by Piers Wenger, Controller of BBC Drama, Charlotte Moore, Director of BBC Content and Susan Lewis for Starz and will be produced by Euston Films, Element Pictures and Veritas. The executive producers are Sarah Phelps and Saul Dibb; Noemi Spanos and Kate Harwood for Euston Films, Ed Guiney for Element Pictures, Alan Gasmer and Peter Jaysen for Veritas Entertainment Group and Elizabeth Kilgarriff for the BBC.