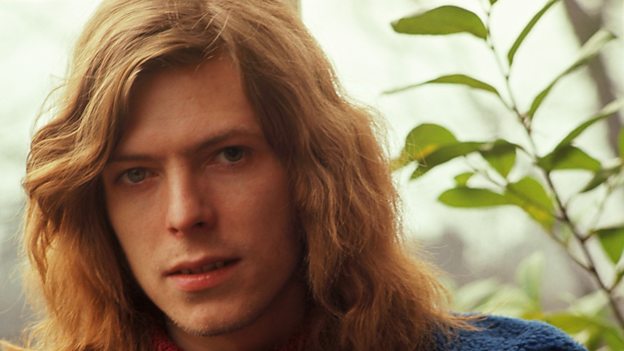 I spent all my formative years adopting guises and changing roles, just learning to be somebody. I wanted to be accepted as David Bowie - a person that you will always watch to see what kind of thing he is doing.David Bowie

The film - which will air 50 years after the release of Space Oddity - is a 90 minute film exploring the Bowie before Ziggy, a time when so many of the ideas that would ultimately turn him into the icon he later became were germinated. Starting in 1966, soon after David Jones changed his name to Bowie, the film traces his interest in everything from Holst to Pinky and Perky, from Anthony Newley to Tibetan Buddhism, and how he used all these influences to create not only Ziggy Stardust, but the material for his entire career.

Speaking in one of the archive clips featured, Bowie says: “I spent all my formative years adopting guises and changing roles, just learning to be somebody. I wanted to be accepted as David Bowie - a person that you will always watch to see what kind of thing he is doing.”

Francis Whately says: “Making this trilogy has been an incredible experience for me, unearthing rare recording, footage and archive, and the privilege of speaking to so many of his friends and collaborators who were so open in talking about the Bowie they knew, loved and admired so much. He is possibly now even more famous in death than in life and I hope this film will bring some new understanding to this great artist from the early years of his incredible life.”

The film also unearths a report, deep from the BBC Archives, following a BBC audition on Tuesday 2 November 1965 of a band called David Bowie and the Lower Third. Their audition material included Chim-Chim-Cheree as well as an original number called Baby That’s A Promise. The BBC’s ‘Talent Selection Group’ describe him as having “quite a different sound”, but also “no personality”, “not particularly exciting” and “will not improve with practice”. The BBC later appears to have changed its mind!

Patrick Holland, Channel Controller, BBC Two, says: “Francis Whately has already created two stunning films about transformative chapters in the extraordinary life of David Bowie. This third film completes that trilogy with the most important and surprising period, the first five years. We are delighted to play it in BBC Two.”

Jan Younghusband, Head of Music TV Commissioning for BBC Music, says: “We were so honoured to work with David Bowie in his lifetime, and so delighted to be able to continue his story on the BBC with this new film, which looks at the incredible journey of his rise to fame, including first time testimony from the people with him along the way in the early days, and also to show his unique performance at Glastonbury.”

David Bowie at Glastonbury 2000 relives the night of Sunday 27 June 2000, when Bowie closed Glastonbury with a two-hour performance. At Bowie’s insistence, only around half an hour of that stunning set was able to broadcast on the BBC - the first five songs were aired live followed by encore tracks at the end of the set. Fortunately the cameras kept rolling and captured the whole set. Now BBC Four are screening an hour of highlights from that career-extending performance, including such previously unbroadcast hits as Ashes to Ashes, Starman and Let’s Dance.

Bowie was returning to the festival for the first time since 1971. His star was not in the ascendant after the Tin Machine era and such 90s solo albums as Outside, Earthling and Hours, but from the moment he walked out on the Pyramid Stage resplendent in a an Alexander McQueen frock coat with his hair in Hunky Dory mode and launched into Wild is the Wind, it was clear that Bowie had decided to embrace and fully restate both his catalogue and his legend. Arguably it was his greatest live performance since the 70s - one that still both summarises and embraces his legend.

In David Bowie: The First Five Years, with remarkable, unheard audio recordings, archive and unpublished documents alongside unique and exclusive interviews with David’s family, girlfriends, boyfriends and early collaborators, the film will tell how David Robert Jones became David Bowie, how David Bowie became Ziggy and how Ziggy became immortal, changing the musical landscape as he did so. This is the story that finally makes sense of one of the greatest icons of the twentieth and twenty first centuries.

Further highlights in the film include a deconstruction of Bowie classics including Space Oddity and The Man Who Sold The World through the eight track masters and previously unheard demos, alongside master tapes from songs that Bowie wanted to forget, such as The Laughing Gnome - a song that has a surprising link to the Velvet Underground; plus never before seen footage of Bowie’s journey through Siberia in 1973, just before he kills Ziggy off at the Hammersmith Odeon later that year.

David Bowie: The First Five Years will show how the Sixties were the blueprint for the Bowie of the future. How without the influences, struggles and failures of the Sixties, there would have been no Ziggy Stardust, but there would also have been no Halloween Jack, Thin White Duke, no Low or Heroes and Elephant Man, or even Jareth the Goblin King and certainly no Blackstar.

The Bafta Award winning first film, David Bowie: Five Years, was broadcast in 2013 and explored five key years from Bowie’s heyday in the Seventies and early Eighties. The second, David Bowie: The last Five Years, was broadcast in 2017 and gave an extraordinary insight into Bowie's whole career through the prism of his autobiographical last works.