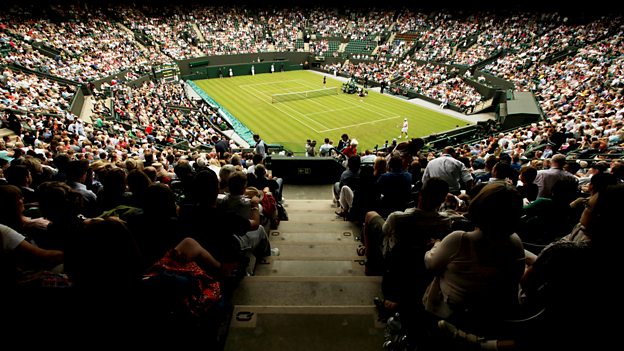 Tennis fans will have all the key action covered wherever and whenever they want it thanks to our new live streaming service, providing comprehensive coverage from up to 15 courtsBarbara Slater, Director, BBC Sport

The magic of Wimbledon returns to screens on 2 July and BBC Sport will be there to serve all of the court action to audiences across TV, radio and online.

For the first time at this prestigious tournament audiences can watch all Centre Court matches in stunning Ultra HD on BBC iPlayer as part of a BBC trial. This will bring Wimbledon to life like never before, with the streams also using a wider range of colours and High Dynamic Range (HDR) technology.

Television
Sue Barker will be at the helm once again, presenting the BBC’s Wimbledon television coverage from the All England Tennis Club. Sue is live daily across BBC One and BBC Two from 11.30am (11am on day 1). She will be joined by an impressive list of tennis legends, including John McEnroe, Martina Navratilova, Boris Becker and Billie Jean King, and Grand Slam winners Tracy Austin, Pat Cash and Kim Clijsters, as well as Wimbledon favourite Tim Henman.

Today At Wimbledon, led by Clare Balding, comes live from the open air studio by The Hill (daily, BBC Two). Clare will guide viewers through the best of the day’s action, joined by special guests to dissect the major talking points as the tournament unfolds.

Radio
BBC Radio 5 live will broadcast live every day throughout The Championships, bringing compelling commentary and colour to listeners daily from midday. Eleanor Oldroyd and Tony Livesey lead the coverage on the station with additional coverage over on 5 live sports extra.

Legendary former Wimbledon champion John McEnroe once again hosts 6-love-6 for a lively take on the tournament so far.

Throughout the fortnight, listeners can ask their Smart speaker to "Take Me To Wimbledon" to hear a short light-hearted and informative audio insight into the tournament.

The World Service Radio Sport team will bring you all the action, reaction and global stories from the All England Club, with presenter Lee James anchoring the daily coverage alongside Chris Dennis. Each day they’ll bring you all the latest news from the tournament on Sport Today at 7.30pm, and at weekends, Sportsworld will feature live commentary and player interviews.

Digital
BBC Sport’s extensive digital service will keep audiences up to date with all the action and news at BBC Sport online and on the BBC Sport app, while the social media channels will offer access behind the scenes and bring fans closer to some familiar faces.

Barry Davies documentary
In a special documentary for BBC One, Sue Barker meets legendary commentator Barry Davies as he takes to the microphone at Wimbledon for the final time after more than 50 years at the BBC. Barry Davies: The Man, The Voice, The Legend airs on BBC One on Wednesday 4 July at 10.45pm and celebrates some of the iconic occasions featuring his unmistakeable voice - including World Cup, FA Cup and Wimbledon finals, Olympic golden moments and The Boat Race, to name but a few.

Barbara Slater, Director of BBC Sport, says: “We can’t wait to bring the most prestigious tennis event to the widest possible audience through our market-leading TV, radio and digital services. Tennis fans will have all the key action covered wherever and whenever they want it thanks to our new live streaming service providing comprehensive coverage from up to 15 courts.”

BBC Ultra HD trial for Wimbledon 2018
The BBC is extending its Ultra HD trial to cover Wimbledon for the first time. It’s part of the BBC’s work preparing for a future where major live events can be streamed freely over the internet in such high quality on BBC iPlayer. Ultra HD trial coverage on BBC iPlayer includes every match from Centre Court throughout the tournament. It will be delivered freely over the internet to audiences with a compatible TV and a high speed internet connection. Those watching in Ultra HD on BBC iPlayer can watch the tournament like never before, as the stream also includes  a wider range of colours and HDR. This will be an HLG HDR production based on BBC R&D’s recent work for the Royal Wedding.

There are a limited number of spaces for each match in this trial, with the live stream available to tens of thousands of people on a first-come, first-served basis. The Ultra HD stream will be clearly labelled on the BBC iPlayer home screen as soon as programme coverage begins.

Audiences will need a connection of at least 40Mbit/s for the full 3840 pixel Ultra HD or 20Mbit/s for 2560 pixel Ultra HD. Footage will be played at 50 frames per second. Given the variability of Wi-Fi connections, audiences may find a more consistent Ultra HD experience with a wired internet connection to the TV.