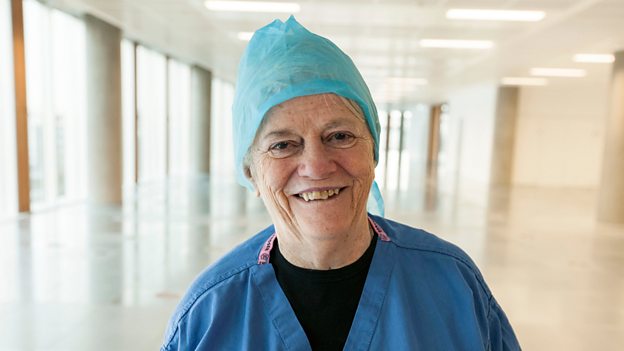 From the pioneering work of the NHS to new research on babies and their development, these commissions will bring our audiences privileged insight into extraordinary worldsTom McDonald, Head of Commissioning, Natural History and Specialist Factual

Tom McDonald, Head of Commissioning, Natural History and Specialist Factual, says: "These two titles signal our commitment to contemporary and cutting-edge science and its impact on our lives. From the pioneering work of the NHS to new research on babies and their development, these commissions will bring our audiences privileged insight into extraordinary worlds."

Every 36 hours, Britain’s NHS treats one million patients. Stretching the length and breadth of the country, it provides free health care for everyone from ‘cradle to grave’ - and in 2018 it will celebrate its 70th birthday.

But what is life really like for the teams of dedicated staff on the frontline of our National Health Service today?

To mark the 70th anniversary of the NHS, four well-known BBC faces head to the coalface for BBC One’s new two part series Life On The Ward (w/t). Spending time inside one of London’s biggest and busiest hospitals, King’s College Hospital, they will work alongside vital members of NHS teams, to experience first-hand the realities of life on the shop floor. Under the glare of headlines about record waiting times, overcrowding and underfunding, the hospital teams continue to provide outstanding healthcare. So just how do they do it?

During their intensive stay working alongside the dedicated teams on the wards, our personalities will learn about the real-life challenges facing the army of people who work for the NHS today.

Everyone in Britain has been shaped by their experiences of the NHS and our BBC faces are no exception.

Medical journalist Michael Mosley trained to be a doctor in the early 1980s. What changes will he notice as he joins the Resus team in King’s incredibly busy Emergency Department?

Reporter Stacey Dooley was in and out of hospital as a child. She’ll work in the hospital’s high tech cardiac labs and with Health Care Assistants on one of Europe’s leading Liver Units, to discover the cost of making life and death decisions.

Ex-politician Ann Widdecombe (pictured) worked as a Domestic in a cottage hospital whilst a student in the 1970s. Shadow Health Secretary between 1998 and 1999 she has strong opinions on the NHS. So will a stint in A&E and trying to manage the daily bed pressures influence her thinking?

Paralympian Gold medallist Jonnie Peacock had meningitis at the age of five and lost his lower right leg. He had almost a dozen operations but has no idea what goes on in theatre. Now, working alongside Theatre Support Workers, he’ll be able to find out.

Life On The Ward (w/t), a 2x60’ is made by BBC Studios’ Science Unit. The Executive Producer is Helen Thomas. It was commissioned by Charlotte Moore, Director of Content, and  Tom McDonald, Head of Commissioning, Natural History and Specialist Factual. The BBC Commissioning Editor is Craig Hunter.

Presented by paediatrician Guddi Singh, The Wonderful World of Babies (BBC Two) will bring together Britain’s top experts in child development and dozens of families from across the country to conduct the most far reaching and comprehensive research into the first two years of life, revealing the inner workings of a baby’s mind and the complexity and genius of how we all grow up.

Sanjay Singhal, Executive Producer for Voltage TV, says: "We’ve long wanted to find a way of making a landmark science series in the family home. The extraordinary work being done in the field of infant brain development has given us a timely reason to do so - and I’m fascinated to see what the experiments and research will reveal."

Over several days, experts and families will come together in a specially-designed baby lab, to answer questions like, is your temperament fixed at four months old? How do early language skills affect our academic success? Do tablets and smart phones actually improve fine motor skills? When do we learn to be altruistic? How early are we aware of gender? Can babies control their emotions?

Scientists now know that fundamental parts of who we are - from our personality to our emotions, from our physical abilities to our intelligence and how we handle relationships - are all shaped by these vital early years. Now, through a series of groundbreaking scientific experiments and demonstrations, The Wonderful World Of Babies will reveal new insights into the minds of babies - and ultimately what makes us who we are.

Drawing on the latest cutting-edge technology, from portable baby brain scanners to head mounted eye trackers, language trackers and specialist baby suits that can predict a tantrum, our team of experts hope to understand how our brains develop as never before. And for the first time, many will be taking their work out of the lab to research babies in their most comfortable environment, the home. Across the series, family homes will be rigged with cameras to enable scientists to capture and analyse the most natural baby behaviours.

Production company Voltage has also recruited 2,500 families to take part in one of the most ambitious citizen science projects ever attempted, the results of which will be revealed in the series. Through user-generated footage of baby behaviour, questionnaires and mass observation the programme will pose questions such as: what makes Britain’s babies laugh? What are the first words we learn to speak?

The Wonderful World Of Babies, a 3x60’ for BBC Two, is made by Voltage TV and is a co-production with the Wellcome Trust. It was commissioned by Tom McDonald, Head of Commissioning, Natural History and Specialist Factual and Patrick Holland, Controller, BBC Two. The Executive Producers are Sanjay Singhal and Fiona Caldwell. The BBC Commissioning Editor is Craig Hunter and the Executive Producer for Wellcome is Lucy McDowell.

Notes to Editors
Families, with babies aged between 0 and 24 months, that would like to take part in this nationwide science survey can do so by getting in touch with the producers at babies@voltage.tv

About Wellcome
Wellcome exists to improve health for everyone by helping great ideas to thrive. It is a global charitable foundation, both politically and financially independent, that supports scientists and researchers, takes on big problems, fuel imaginations and spark debate.