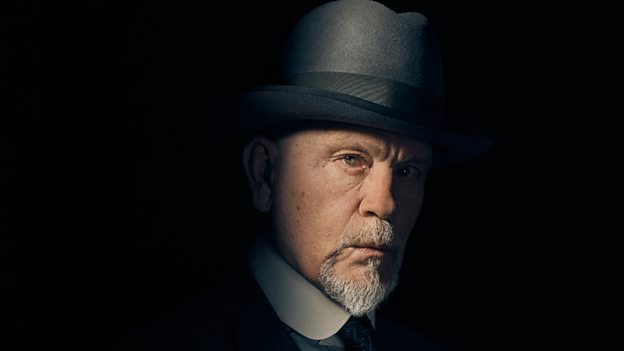 Category: BBC One; Drama; Casting
A first-look image of John Malkovich as Hercule Poirot in the new Mammoth Screen and Agatha Christie Limited adaptation of The ABC Murders for BBC One has been released, as further guest cast are announced.

John Malkovich says: “I’m honored to have been asked to play Hercule Poirot. It’s a role that’s been played by a number of excelllent actors, and I am enjoying the numerous challenges this part presents. I have great respect for Sarah Phelps’ screenplay and hope to do both she and Agatha Christie’s creation some measure of justice.”

Bafta nominated writer Sarah Phelps returns to explore the 20th Century through Christie’s work. This time the setting is the 1930s, a time when the nation is dangerously divided and suspicion and hatred are on the rise. In the midst of this, Poirot faces a serial killer known only as A.B.C. First the killer strikes in Andover, then Bexhill. As the murder count rises, the only clue is the copy of The ABC Railway Guide at each crime scene. Poirot’s investigations are thwarted at every turn by an enemy determined to outsmart him. If Poirot is to match his nemesis then everything about him will be called into question: his authority, his integrity, his past, his identity.

Filming for The ABC Murders is underway and is directed by Alex Gabassi (The Frankenstein Chronicles, El Hipnotizador) and produced by Bafta nominated Farah Abushwesha (Irreplaceable You, The Party).

Endeavor Content will handle sales in all territories internationally.