Two Doors Down set for a Christmas cracker! 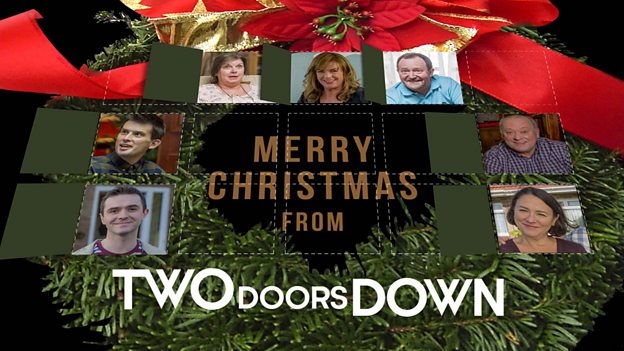 Two Doors Down precisely captures the raucous comedy voice of modern Scotland with these terrific characters and has become a firm favourite with the BBC Two audience.Shane Allen, BBC Controller, Comedy Commissioning

Category: BBC Two; Comedy; Scotland; Commissioning; BBC Studios
A cracking package of a Christmas special and a full new series of a further six episodes is being delivered by the Two Doors Down team.

The sitcom, set in the fictional Scottish suburban street of Latimer Cresent, will be giving Christmas its own special dose of neighbourly love.

At the heart of it all, as ever, will be put-upon couple Beth (Arabella Weir) and Eric (Alex Norton) hoping to have a quiet festive feast on their own.

But this christmas bonus will see Cathy (Doon Mackichan) and Colin (Jonathan Watson) turn up, their trip to the French Alps having been thwarted by a cancelled flight.

Neighbour Christine (Elaine C Smith) piles in too with granddaughter Madison, after daughter Sophie is delayed in Paris by the same disruption.

While Beth and Eric’s son Ian (Jamie Quinn), over with new boyfriend Gordon (Kieran Hodgson) to drop off presents, admits their other plans have fallen through… and asks if they can stay on for dinner. With a meal for two now stretching to six, Christine and Cathy reveal their own particular take on the spirit of christmas.

The festive special will be followed by the new six-part series early in 2018, where it will be revealed that Christine’s daughter Sophie, who has been played by Sharon Rooney, has taken baby daughter Madison to live with a new boyfriend in Wales.

But there will be more of newcomer Gordon, played by Kieran Hodgson, who played Ian Lavender in We’re Doomed: The Dad’s Army Story.
Scottish wrestling and comic phenomenon Grado, whose real name is Graeme Stevely (Scot Squad, River City), will also be making a guest appearance in the series alongside Joy McAvoy (Filth, Stonemouth).

Having started with a Hogmanay one-off pilot in 2013, this will be the third series for the BBC Two Comedy which is written by Gregor Sharp and Simon Carlyle and produced by BBC Studios.

Series two, shown at the end of 2016, more than sustained the impressive viewing figures for the first series, which averaged well over a million viewers in the UK and double the average numbers of viewers for the timeslot in Scotland. Earlier this year Two Doors Down won best comedy at the Royal Television Society Scotland awards.

The new series is currently filming on location in the Glasgow area and at BBC Scotland’s Dumbarton Studios.

BBC Studios Executive Producer Steve Canny says: “We’re completely delighted to have the writers, cast and crew back and working away on seven new episodes. Two Doors Down is a rare thing - a show that gets richer and finer and funnier as you delve deeper in to the lives of the characters. We have plenty of knock-out funny things in store for the Christmas special and the series that will follow early in 2018.”