Insects could be the sustainable food of the future 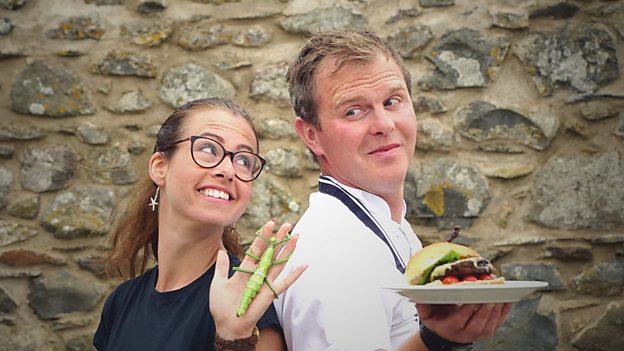 It's not about a squirming grub on a stick, it's about utilising a new source of protein to help us to eat more healthily and more sustainably.Dr Sarah Beynon

Category: BBC One; Wales; Commissioning; Factual
Scientist Dr Sarah Beynon and award-winning chef Andy Holcroft are bringing a brand new industry to Wales in the form of bug food. And their endeavours are to be the feature of a brand new documentary The Bug Grub Couple on BBC One.


Innovative Welsh couple Sarah and Andy have spent the last four years building the foundations for their new venture in the UK’s smallest city, St Davids in Pembrokeshire. Sarah, an Oxford University scientist and farmer, founded the award-winning Dr Beynon’s Bug Farm on her original family farm in 2013. The Bug Farm is a research and education centre focusing on the importance of bugs and how we can produce food efficiently and sustainably.

Sarah says: “I strongly believe that insect protein is a new ingredient here in the western world that can improve the sustainability of our food production systems and improve the nutritional quality of our food. It's not about a squirming grub on a stick, it's about utilising a new source of protein to help us to eat more healthily and more sustainably.”

Chef Andy Holcroft launched the Grub Kitchen, which is located alongside the farm and offers an interesting double menu with a choice of ‘normal’ food next to insect versions. The Grub Kitchen is the UK’s first full-time restaurant serving food containing insects and recently won the award for the Most Innovative Business Of The Year in Wales.

Andy says: “As a chef, it's not often you find new ingredients. Edible insects give me a whole larder of exciting, new ingredients and flavours to experiment with and the possibilities for new dishes are endless."

The documentary shows that bugs use up very little water and can eat waste products, while other animals need feed from edible arable crops. The challenge for the couple is to change people’s perceptions of bugs from creepy crawlies to edible, sustainable and tasty food.

First Minister of Wales Rt Hon Carwyn Jones AM features in the documentary and shares his thoughts on bugs as a new and sustainable source of protein. He thinks it’s just a question of "broadening people’s minds" and the industry could be a benefit to Wales.

The programme follows Sarah and Andy as they take their ambitious plans to the next stage by taking Andy’s dishes out of the restaurant and into the mainstream by launching their new food brand Cricket CookiesTM. They also travel to the Netherlands to meet large-scale insect farmers and have their products tested by top food scientists.

The Bug Grub Couple will be broadcast on Monday 7 August at 7.30pm on BBC One.

With a population set to reach ~10 billion by 2050, the documentary explores the global need for more sustainable and healthy protein sources alongside conserving natural resources and ecosystems. Insects are extremely nutritious and healthy: whole insect powder can be >65 percent protein, contains all nine essential amino acids, is low in saturated fat, low in sugar and has the perfect balance of omega 3: omega 6 fatty acids.

Insect farming is also extremely sustainable: Many insects can produce equivalent amount of protein to beef with 25 times less feed and a fraction of the water and energy. The edible insect market is predicted to be worth €65 million in Europe alone by 2020.