New writers selected for second series of The Break 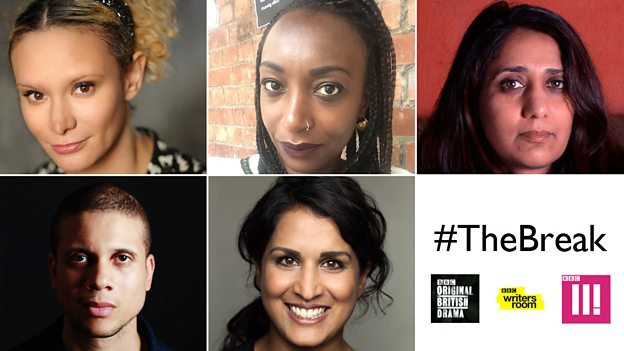 Writersroom is delighted to have the opportunity to showcase the work of such talented writers and directors. These shorts have drama, tension, laughs and surprises! We hope the audience enjoy this series as much as they did the last.Anne Edyvean, Head of BBC Writersroom

Filming kicks off in November for The Break II – an exciting collaboration between BBC Writersroom and BBC Drama Production to make five original short monologues for BBC Three, written by up-and-coming BAME writing talent from across the UK.

Following on from the success of the first series, these shorts will showcase writers with a strong, unique voice who have yet to write for the screen. The selected writers were discovered through BBC Writersroom talent searches, development schemes and theatre partnerships.

Rachelle Constant, Producer, says: “I’m thrilled to be producing another series of The Break. We are really excited by the stories and potential of the writers this year and have two fantastic filmmakers, Toby Fell-Holden and Nour Wazzi to help bring these short stories to life.”

Anne Edyvean, Head of BBC Writersroom, says: “Writersroom is delighted to have the opportunity to showcase the work of such talented writers and directors. These shorts have drama, tension, laughs and surprises! We hope the audience enjoy this series as much as they did the last.”

Berri is a writer and a performer. A graduate of both the Belgrade Theatre’s Critical Mass and the Royal Court Theatre’s local playwriting schemes and 2014 alumna for the Orange Tree Theatre’s invitation writers group. Her work has been staged by the Royal Exchange, Octagon Theatre, Theatre503, High Tide, The Space, Old Red Lion, and West Yorkshire Playhouse.

Her theatre company, Barefaced, has received rave reviews in the past for their female-led, pop-up genre, devised work. She recently wrote and performed her first one-woman show, LARP which received five star reviews. Her other full length play Someone with a naturally cheery disposition sought was longlisted for the 2015 Bruntwood Prize and Mindless Meditations was longlisted for the 2013 Verity Bargate Award.

Chino Odimba was born in Nigeria, and raised in London. Past work includes, Women Embrace Two (Bristol Old Vic), An Ode to Adam (The Ustinov Theatre), Rainy Season (Bristol Old Vic’s ‘Ferment’), RAAR Birds (Ugly Sister Productions), The Bird Woman of Lewisham (Arcola Theatre). An attachment at Bristol Old Vic in 2014 led to a rehearsed reading of a new play His Name is Ishmael in 2014.

More recent writing credits include a short monologue as part of Joanne (Clean Break Theatre) which was performed at Soho Theatre in 2015 and the RSC in 2016. After a two year attachment with Clean Break Theatre, her play Amongst the Reeds has just finished a run at Edinburgh Fringe Festival (2016) and The Yard Theatre.

Chino was a finalist for the Alfred Fagon Award (2014), and shortlisted to final ten of the Bruntwood Playwriting Award (2015) for her play Wild is de Wind. Currently under commission for Eclipse Theatre’s Revolution Mix project (Bristol Old Vic), and as the Channel 4 Playwright (formerly Pearson Playwrights' Scheme) at Talawa Theatre, she is also working on a community play for Tricycle Theatre's Mapping Brent project due to be produced in spring 2017.

Emteaz’s acclaimed first play, Sweet Cider, was produced by Tamasha Theatre Company at the Arcola Theatre in 2008 and was published in 2013 in the anthology Plays for Today by Women by Aurora Metro Books. Blood, her second full length play for Tamasha, toured nationally in March and April 2015.

In 2015, she wrote Outsiders for Pilot Theatre as part of an EC Culture project called Boomerang; the production went on national tour. In their four star review, London Theatre 1 said, “This is a beautiful and very welcome hour of theatre.” She was also selected to take part in the IWrite feature film scheme run by Creative England.

As a performance poet she has performed nationally and internationally and has toured with Transglobal Underground and the Benjamin Zephaniah band. Emteaz works extensively as a workshop practitioner in both statutory and community settings, specialising in pupil referral units. She is currently under commission to the Royal Court Theatre.

Born and raised in Brixton, Nathaniel’s desire to create stories was sparked by the eclectic cultural mix of bedtime tales his mother would read him. But, for a long time his path seemed to lead towards becoming a professional footballer – that is, until a career-ending injury devastated his dreams.

Nathaniel found happiness again through his writing, which ultimately led to his selection for the MA Screenwriting Course at the National Film & Television School where, for the duration of the two year’s he was a David Lean Scholar.

Along with his monologue Special Delivery for The Break II, Nathaniel has recently completed an afternoon play for BBC Radio 4, and a short script Five by Five, for BBC Studios/Green Door. He also has a number of original dramas in early development including Man Marked (Kindle Entertainment), Football Traffickers (Hillbilly Television), Companion (BBC Studios) and Return Leg (Merman). Short play, The Job has been optioned to Cove Pictures for adaptation into a short film, and a feature Nathaniel has co-written with Martti Helde, Scandinavian Silence, is due to shoot later this year in Estonia.

As well as writing for the screen, Nathaniel loves playwriting and is a part of the Talawa Theatre Company’s writers’ network.

Maya is an actress best known for playing PC Maneet Bindra in BBC drama Line of Duty and Shazia in series 1-3 of BBC 1 sitcom Citizen Khan. Maya was also part of the writing team for the latest series of The Kumars produced by Hat Trick for Sky 1. Her debut play Sket premiered at the Park Theatre in April 2016.

Maya says: "Through BBC Writersroom, I have taken part in various workshops including the Comedy Studio Residential and the Continuing Drama Workshop, amongst others. The Writersroom has been an invaluable part of getting my writing career started, providing constant support and guidance, and I am thrilled to be working on this project with them." 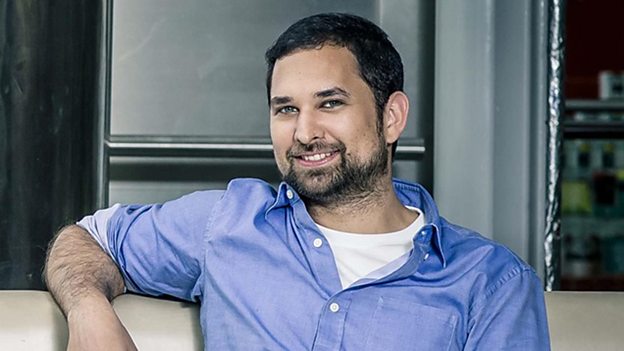 Toby is a British writer-director based between New York and London. He graduated from Columbia’s Film MFA in 2013 and holds a B.A. in Philosophy, Politics and Economics from Oxford University.

He is a Screen International 2016 Star of Tomorrow. His short BALCONY won a Crystal Bear at the 66th Berlinale, and Best International Short at Flickerfest, along with a nomination for Best British Short at the BIFAs. Little Shadow, his thesis film, was long-listed for a BAFTA and nominated by the Casting Society of America (CSA) for an Artios.

He is a 2016 recipient of a John Brabourne Award and has been awarded fellowships from the Moving Picture Institute and the Academy of Motion Picture Arts and Sciences. He recently wrote a feature script with director Ramin Bahrani. Toby is currently working on his first feature with Western Edge Pictures. 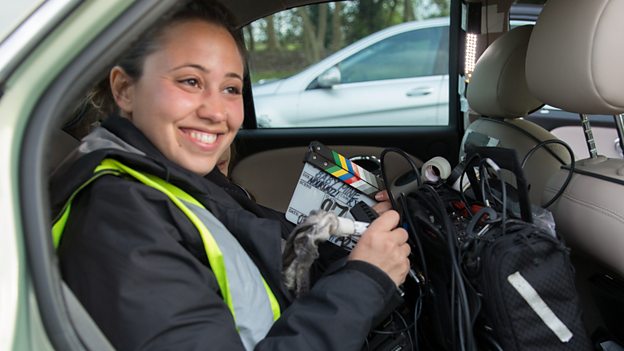 Award-winning filmmaker Nour Wazzi has worked in the industry for over 10 years collaborating on, and developing features and short films. She has amassed awards on a number of short films - winning Best Foreign Short in Mexico, Best Film at Naoussa and Jury Special mention at Magma for Film London’s Up on the Roof. The film which premiered at the BFI London Film Festival, has been selected, in over 30 festivals worldwide and has recently been sold for international TV broadcast, and is available at the BFI national archive.

In 2010, Nour produced and directed the Film London award-winning short Habibti - based on a story by OSCAR nominee Ari Folman (Waltz With Bashir). It received its broadcast premiere on the BBC in 2012 and has found airline, VOD and international television distribution.

In 2012, Nour produced and directed the award-winning psychological thriller Shackled, starring Emilia Clarke (Game of Thrones), which sold internationally for VOD and TV distribution. Nour has recently completed her BFI short thriller Baby Mine and is currently co-writing the feature version of Baby Mine and developing a number of genre projects. 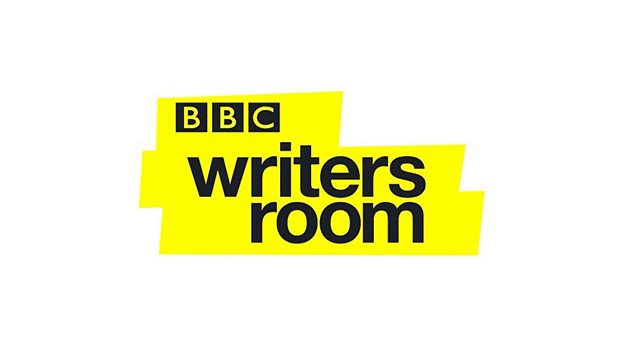