Sherlock: The Abominable Bride most watched programme across all channels over festive season with 11.6m viewers 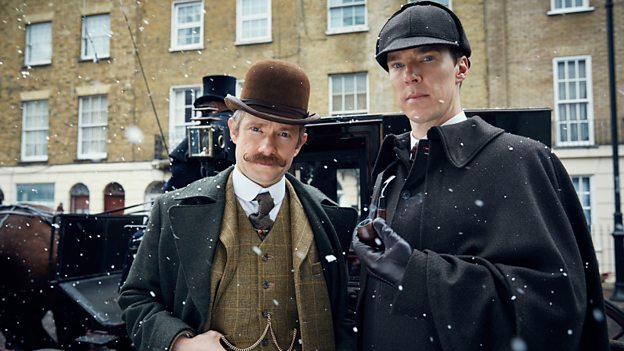 Category: BBC One
Sherlock was the most watched programme between 21 December 2015 and 1 January 2016 across all channels. 11.6 million viewers tuned in to see Benedict Cumberbatch as Sherlock Holmes and Martin Freeman as John Watson solve the case of The Abominable Bride, according to consolidated viewing data issued today.

Charlotte Moore, Controller BBC One added: "After a two year wait, it's incredible to see the indisputable power of Sherlock bringing the nation together to make it the biggest show of the festive season. It's a tribute to the talented team behind this much loved show."

The next biggest programme of the festive season was the New Year’s Eve London fireworks display, which had a consolidated audience of 11.4m.

Sherlock is written and created by Steven Moffat and Mark Gatiss, and inspired by the works of Sir Arthur Conan Doyle. Sherlock is produced by Sue Vertue and the executive producers are Beryl Vertue, Mark Gatiss and Steven Moffat for Hartswood Films, Bethan Jones for BBC Cymru Wales and Rebecca Eaton for Masterpiece.