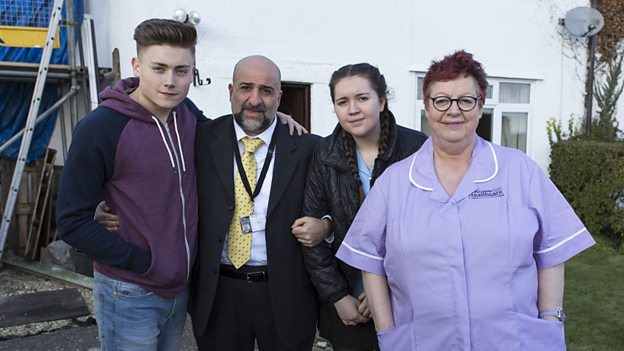 Having failed the auditions for Darts Players’ Wives, it's lovely to slip into a glamorous lilac nurses tunic and step into the exotic world of community health care.Jo Brand

In 2011, Jo Brand won a BAFTA for her award-winning performance in the BBC Four hospital sitcom Getting On. Now Jo is back and in rude health as she returns as Kim Wilde in this brand-new three-part comedy series that turns the spotlight on the Cinderella of the NHS, domiciliary care, along with the patched-up domestic lives we all lead.

Employed by a failing outsource provider as a Care Assistant in the community, Kim receives little more than the minimum wage for a package which consists of unpaid overtime, management bullying and horrendous shifts. Her daily slog is matched only by that of her husband, Dave (Omid Djalili), a self-employed private hire driver battling long days and grumpy customers, with only the rattlings of fellow driver Terry (Tom Davis) to fill the endless hours of waiting.

Add to the above an ailing mum, three kids, a dog called Carpet, an unfinished extension and a sister Jackie with a plan to sort out all their woes at a stroke. Going Forward is a universal tale and holds a mirror to modern Britain and the sacrifices made as lives are put on hold for the sake of others. The unique series treads its own fine line between tragedy and triumph to add its own bittersweet voice to this well-trodden ground.

Three episodes. Three days. Three chances to eavesdrop on a day in the life of the Wildes.

Jo Brand says: “Having failed the auditions for Darts Players’ Wives, it's lovely to slip into a glamorous lilac nurses tunic and step into the exotic world of community health care.”

Cassian Harrison says: “I’m delighted to have Jo and the Getting On team returning to BBC Four. Getting On was a defining series for the channel and I’m really looking forward to seeing how the story has moved on in the intervening years.”

Shane Allen says: “Jo’s naturalism as a performer is mesmerising, the casting is spot on and the writing is sublime. This is the world of zero-hours contracts alongside juggling the responsibilities and demands of that middle generation with demanding children and evermore dependent parents. It’s a world Jo knows well as she brings truth, depth, heart and humour to our everyday world. It’s a great accompanying series to The Detectorists in cementing BBC Four’s reputation for the biggest names in British comedy to make distinctive and heartfelt comedy centred around ordinary lives, whilst tackling broader themes about contemporary society.”

Going Forward will air on BBC Four later this year.