Second series of BBC One’s Class Of 92: Out Of Their League commissioned 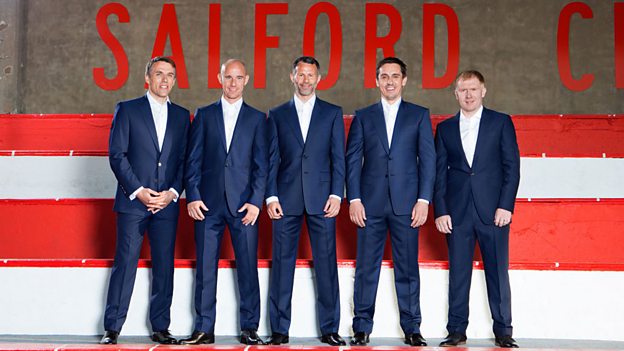 The original series took us to the heart of a community where much was at stake as the new owners took over. We are very excited to return to Salford for another season of highs and lows. Patrick Holland, Head of BBC Documentaries

Category: BBC One; Salford; Sport; Commissioning
The fortunes of non-league football club Salford City FC, and their five famous owners are set to return to our screens as BBC One today announces a second series of Class Of 92: Out Of Their League.

The successful first series, which aired last autumn, followed the ups and downs of Manchester United stars Ryan Giggs, Paul Scholes, Nicky Butt, Gary and Phil Neville as they underwent their first season as new owners of Salford City FC. Now the famous five, along with managers Bernard and Jonno, chairman Karen Baird and of course Babs the tea lady are heading back to BBC One.

We left the club in jubilation on the final day of the season as they lifted the trophy as champions of the Evo-Stick First Division North league. Now things have moved on dramatically at Moor Lane. With two of their owners now based in Spain and the players becoming local celebrities, have performances on the pitch been affected?

Patrick Holland, Head of BBC Documentaries, says: "The original series took us to the heart of a community where much was at stake as the new owners took over. Not only was it hugely entertaining, it also explored the often difficult relationship between tradition and progress that resonated with the wider audience. We are very excited to return to Salford for another season of highs and lows.”

Meredith Chambers says: “I’m delighted to once again bring the story of Salford City to the BBC. Our cameras have been rolling since the start of the current season and there’s certainly more drama, on and off the pitch to come. Since the first season the characters of Moor Lane have been thrust into the limelight and things have certainly changed at this club. The access we have once again been given is exceptional and the next chapter is set to be just as thrilling as the first. ”

Electric Ray is a joint venture with Sony Pictures Television.