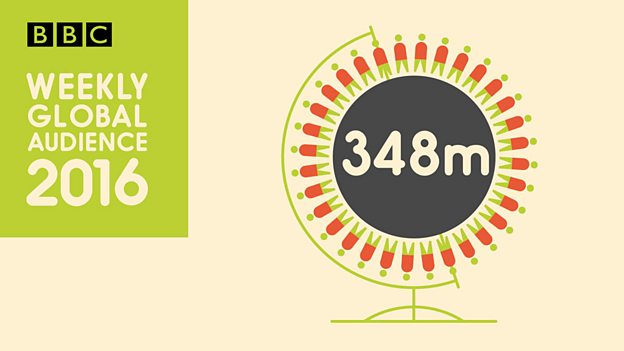 These are fantastic results which show the BBC going from strength to strength around the world and demonstrate the global appetite for accurate, impartial news.Francesca Unsworth, Director, BBC World Service Group

The figures – the BBC Global Audience Measure (GAM) - represent the combined measured reach of international content, both news and entertainment, for the year 2015/16.

They show that the BBC’s weekly global news audience has increased by 38m people, or 13 per cent, to a total of 320 million.

For the second year running, television (162m) is a bigger platform than radio (147m) for the BBC’s international news services. All platforms have grown since last year – television, radio, and digital (80m).

The BBC World Service, shortly to begin adding new and enhanced services across the world after receiving new funding from the UK Government, has seen its audience increase to 246m, from 210m last year. This growth is largely driven by new TV news bulletins in languages other than English.

Francesca Unsworth, Director of BBC World Service Group, says: “These are fantastic results which show the BBC going from strength to strength around the world and demonstrate the global appetite for accurate, impartial news.

“We’re about to begin the biggest expansion of the World Service since the 1940s, thanks to the additional funding agreed by the UK Government last year.

“This will ensure we reach more people than ever, especially in countries where media freedom is under threat.”

Tim Davie, Director of Global and CEO of BBC Worldwide, comments: “BBC Worldwide continues to fuel international audiences’ appetite for premium content, and in the second year of the Global Audience Measure, we’ve reached 36.4m people per week across our owned and operated TV and digital platforms providing a 27.4m incremental contribution to the Corporation’s total.”

Other key findings include:

The GAM is measured every year by the BBC using a consistent methodology comprising surveys, ratings data, and digital analytics. These data sources are converted into individual adult weekly reach and de-duplicated.

The figures in the GAM have a standard error margin of +/- 3%.