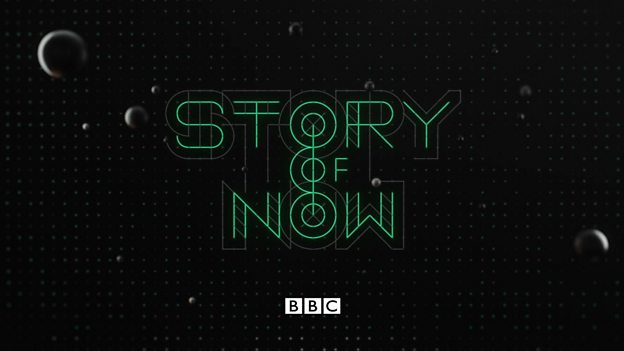 Category: Commissions and casting; Online and interactive
Story Of Now is a brand-new 20-part interactive series hosted by Idris Elba that explores some of the fundamental questions about the human condition and history of the world from the beginning of time to now, with experts in their field.

Did the universe begin with the Big Bang? Can you have religious faith without the belief in God? Is the sky really blue? Can time move faster or slower? Will artificial intelligence lead to mankind’s extinction? The documentaries ask questions about the events, ideas and innovations from the past 13.8 billion years that have led to this exact moment.

The interactive films are available exclusively on BBC Taster, the BBC’s recently launched space for new and experimental ideas. Story Of Now joins exciting content on Taster from other stars such as Simon Reeve, Lena Dunham and Run The Jewels, to name just a few.

The five-minute interactive videos bring together games, web pages, slideshows, other videos and polls, all of which are interacted with inside the video. They were commissioned by the BBC and made by technology company TouchCast to explore the potential of interactive formats

TouchCast Studios UK CEO and Story Of Now Executive producer, Paul Field, says: “It is entirely apt that a major series using new talent and sparking new talking points uses ground-breaking technology to throw these debates forward. In Story Of Now, viewers can interact with games, web pages, other video, slideshows, polls and 360 panoramas from inside the main film.”

BBC Taster is a place for the BBC to try new ways of telling stories, develop new talent, and put new technology through its paces. It also allows the BBC to showcase a range of editorial and technology projects that may have previously remained behind closed doors.

Sargy Mann is an artist and former lecturer in figurative art. He’s been registered blind for 25 years and explores whether we actually need to see to be able to create art Now.

Is the sky really blue… or are all colours only something we think we see? Dr R Beau Lotto, who is Reader in Neuroscience at University College London, artist and founder of the Lotto Lab, addresses these questions and asks, does technology enhance our visual universe Now?

Professor Anil Seth, Professor of Cognitive and Computational Neuroscience at University of Sussex, explains the science behind why we see the same things in different ways… and asks is there a way of measuring how conscious we are at this exact moment, Now?

Did the universe begin with the Big Bang? Dr Martin Archer, physicist in Space Plasma Physics at Imperial College London, explores the theory and examines if it did, what came before it and what remnants of it are still with us Now?

Naomi Klein is a social activist known for political analysis and author of This Changes Everything: Capitalism vs The Climate. She examines our relationship with the planet… and asks are we sleepwalking towards self-destruction Now?

Why are physicists so obsessed with finding a theory of everything to explain how the universe works now? Dr Andrew Pontzen, a physicist in Space Plasma Physics at Imperial College London, presents the thinking behind the obsession Now.

Professor Francesca Stavrakopoulou, Professor of Ancient Religion at Exeter University, examines why did we start believing in God and whose god should we believe in Now?

Professor Yuval Noah Harari lectures in History at Hebrew University of Jerusalem and is author of the ground-breaking bestseller Sapiens. He questions what makes us so successful as a species… and are we getting smarter all the time Now?

Edo Segal is a prolific entrepreneur and inventor. He’s CEO of bMuse, a company which uses a studio model to develop and incubate products reimagining media. He considers whether it is the sharing of information that makes us human… is social networking creating a collective consciousness... and will artificial intelligence lead to our extinction many years from Now?

Poet, playwright and performer Inua Ellams describes himself as a 'word and graphic artist’. He asks if language evolved to help us communicate, why globally do we still struggle to talk to one other, even Now?

Dr Susanna Bidgood is a molecular biologist at Cambridge University and leads research in Antibody Mediated Intracellular Immunity. She explores how organic life began… and whether science has proved there is no discernible difference between living and inanimate objects Now?

Ronak Patani is a performance poet who explores why it is we can’t help falling in love… and have scientists found a way to stop us falling out of it Now?

Rajan Datar is Broadcast Travel Journalist of the Year 2012 and was host of Fast Track on BBC World News for six years. He discusses if there is any true map of the world... and how is it possible to be at the centre of the universe wherever you are in the world Now?

Economist Soumaya Keynes is a descendent of John Maynard Keynes and Charles Darwin. She challenges how the greatest system of trust ever invented allows us to cooperate with people we don't trust at all Now?

Dr Molly Crockett, a neuroscientist studying the neural basis for morality, decision-making and altruism at Oxford University, looks at how biochemistry affects our moral decisions… and can it in fact enhance our ethical choices Now?

Timandra Harkness is a comedy writer, performer and presenter. She describes herself as an ‘irresponsible hedonist or deep humanist’ and asks how do we decide whether we're politically on the left or the right… and why does political conflict matter so much Now?

Rev Peter Owen Jones is a renegade Anglican clergyman, author and television presenter. He explores whether scientists have discovered how you can have religious faith without belief in God Now?

Ashley Ramsden is Founding Director of the School of Storytelling, actor and international storyteller. Are stories much more than tales we tell to other people, he asks. And are they intrinsic to how we think Now?

Claudia Hammond, a psychologist, author of Time Warped and presenter of All In The Mind and Mind Changes on BBC Radio 4 who assesses the concept of Time… What is time? Can it move faster or slower? Or is it an illusion? And when is Now?