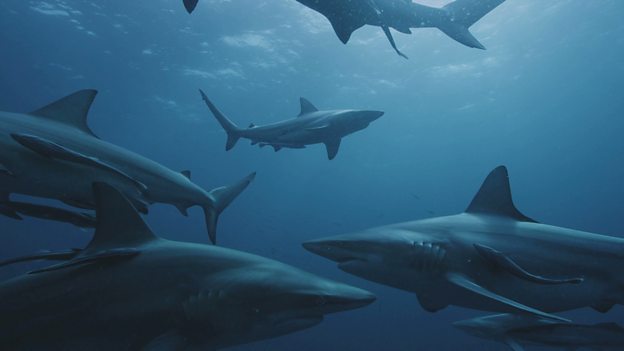 Category: Factual; BBC One; Commissioning
Beneath the ocean waves lives a mysterious and ancient family – sharks. They hunt in every sea and are the oceans’ most successful predators. For the last two years, a team from the BBC's Natural History Unit has been travelling the world to make 'Shark', the ultimate wildlife trilogy on these extraordinary yet misunderstood animals.

Using the latest ultra HD and high-speed-camera technology to film behaviour never seen before, the team has filmed over 30 species of shark (and their cousins, the rays) in dozens of locations.

2015 marks the fortieth anniversary of Jaws. This new series, narrated by Paul McGann, will change everything you thought about sharks, revealing all aspects of their lives and showing them to be intelligent, social and complex creatures.

There are more than 500 species of shark, all belonging to one large, extended family; the largest, the Whale Shark, is over 40ft long, the smallest, the Dwarf Lantern Shark, can fit in the palm of your hand, and glows in the dark. The NHU team has filmed courtship, baby sharks developing, how sharks grow up and even how they clean their teeth.

The first film shows the huge diversity of sharks and why they are such great hunters. We meet Ragged Tooth Sharks that live among the shipwrecks off the coast of Cape Fear; and Oceanic Blacktip Sharks, masters of collaboration, off the coast of South Africa, where every year hundreds gather to hunt the shoals of anchovy migrating up the coast. It is the greatest collection of hunting sharks in the world.

In the sun-lit waters of Indonesia lives the bizarrely named Tassled Wobbegong, which looks like a piece of coral as it lays motionless waiting for an unsuspecting fish to swim by. Mako Sharks, the fastest shark in the world, has been clocked swimming at 46 mph; while Greenland Sharks, which can live for 200 years under the ice of the Arctic, swim at just half a mile an hour, their metabolism lowered in order to cope with the sub-zero temperature.

Many sharks have adapted to life in the deep ocean and often look very strange. A Frilled Shark has 200 teeth and catches its prey like a snake; and the strange looking Goblin Shark has remained virtually unchanged for 100 million years.

The Epaulette Shark is at the other extreme and has adapted to be able to walk on land. It feeds on the shallow reef flats of the Great Barrier Reef. At low tides it can end up stranded on dry land, but its pectoral fins can act as legs and so it can walk itself out of trouble. Also featured are Thresher Sharks; Basking Sharks; Reef White Tipped Sharks; and the most famous and feared shark of all: The Great White.

Great White Sharks hunt fur seal in the waters of South Africa – attacking them from beneath with such force that sometimes the sharks hurtle clean out of the water. This spectacular behaviour is the climax of the first programme and the team captured the whole of the hunt with a combination of underwater cameras, high-speed cameras and a camera mounted to a helicopter.

The second film shows the secret lives of sharks and rays, from courtship and mating to the young growing up; from the remarkable ways they navigate the ocean to the surprising relationships they have developed with other creatures – even us.

We also see a different side to the The Great White - it is, in fact, a very polite shark. It’s recently been discovered that Great Whites use body language to communicate with each other, and the film shows two sharks telling each other that they are not a threat. When over 150 Great Whites gather together at the Island of Guadalupe to hunt elephant seals, they can use these signals to show who is in charge and avoid any conflict.

In the Pacific, hundreds of the Scalloped Hammerheads come together to find a mate through a beautifully choreographed dance that can last all day and when its time for Port Jackson Sharks to mate, they gather in Jervis Bay, Australia, in their thousands. The females lay only a very few eggs, but each one is shaped like a corkscrew as big as her head. In order to give the eggs as good a chance as possible, they have evolved this strange shape so they can be wedged securely underneath rocks.

Some sharks are more like mammals in the way they bear their young. In the isolated mangroves of South Bimini, Bahamas, pregnant Lemon Sharks give birth to fully formed pups which they have carried for 12 months - the females have a shark version of an umbilical cord and placenta and the pups even have belly buttons. The juveniles spend their first seven years in shark nurseries deep within the mangrove swamps and have been shown to form friendships with other sharks, learning from them how to find food and avoid danger.

Whale Sharks weigh up to 20 tonnes, and they feed by filtering plankton from over 4.5m litres of water each day, while Tiger Sharks travel for weeks to reach Raine Island off The Great Barrier Reef, where they feast on Green Turtles who come to breed there for a few weeks each year.

The most sociable group in the shark’s extended family is the rays – essentially flattened, elongated sharks with 'wings’; some have a wingspan of up to seven metres. Like sharks, they too have a complicated social life, but one species, the Mobula Ray, has developed the most extraordinary way of getting noticed: somersaulting through the air as they compete to make the biggest splash. Each year, hundreds of thousands come together to feed in Baha, New Mexico, to make these acrobatic displays – it is thought that the loudest belly flop gets the most attention.

Many sharks and rays are great ocean navigators, travelling thousands of miles in their search for food. Some navigate using the sun, the moon, their sense of smell or even with tiny sensors that act like a compass. Giant Manta Rays are perfectly designed to fly through the ocean with huge ‘wings’ made from extended pectoral fins.

Shark: Beneath The Surface is the final programme. It shows the extraordinary work of scientists across the world as they uncover the secrets of sharks, and examines the future of sharks as they face their darkest hour.

It is the beginning of a golden age for shark scientists - they are discovering that sharks are not mindless predators but surprising, intelligent and social creatures. But it is a race against time, since many shark species are under threat of extinction and populations of some are plummeting.

Scientist Dr Demian Chapman reveals how Oceanic Whitetips are smart enough to get a free meal by snatching fish from the lines of sports fishermen, having learned the subtle changes in boat engine noise that indicate a fish has been caught. Dr Andrea Marshall demonstrates why Giant Manta Rays are the smartest fish in the sea and how they could be more like us than we realized. And Dr Alessandro Ponso is trying to track the mysterious migrations of Whale Sharks – using some ingenious technology.

By tapping into the science of sharks, major breakthroughs are being made in the worlds of medicine and engineering. Professor David Gruber is studying the bizarre Swell Shark – this is a shark that can glow in the dark. He dives with a unique camera that has been adapted to see like a shark’s eye, and it shows how their skin fluoresces bright green in moonlight.

This skin could transform the treatment of life-threatening diseases like cancer and Alzheimer’s. The chemical that makes the shark glow can be used to track unhealthy cells, so by following how they spread around the body, it’s possible to study how diseases work, and to see what drugs work best at stopping them.

But all this new knowledge comes just as many sharks face extinction. The main threat comes from commercial fishing, which kills an estimated 100 million sharks each year. Scientists fear we could be on the brink of losing some species for good - in some cases before we even knew they existed. Twenty three percent of known shark species are currently under threat of extinction.

Scientist Dr David Ebert has discovered 24 new species of sharks and he thinks there could still be many more to find. One of the best places to find these new species is at the fish markets of Taiwan, where they are increasingly finding more very-deep-water species, showing that the trawlers are fishing deeper than ever.

Dr Demian Chapman explains that sharks are vital to the health of the ocean ecosystems, as they are top predators. If these predators are removed, the whole habitat changes fundamentally – as has been shown when wolves or tigers have been taken out of habitats on land.

Sharks attacks are rare: humans are more than 50,000 times more likely to drown than to be attacked by a shark. Many sharks are killed by efforts to keep them away from beaches using nets or culls, even though there is no evidence that these methods work, and scientists are urgently looking for an alternative solution.

In False Bay, Cape Town, over 700 Great White Sharks share the bay with many surfers and swimmers. Dr Alison Kock has been studying where the sharks go and how they find their prey as a way of using science and an understanding of shark behaviour to decrease the threats.

Attitudes towards sharks are changing. Recently, in Western Australia, there were two days of demonstrations against a shark cull, with thousands of protesters. In Asia, the price of shark fin is dropping rapidly. And in many countries, shark tourism is becoming big business as people queue up to dive with sharks; sharks are becoming worth more alive than dead. Perhaps the tide is at last turning in favour of sharks.