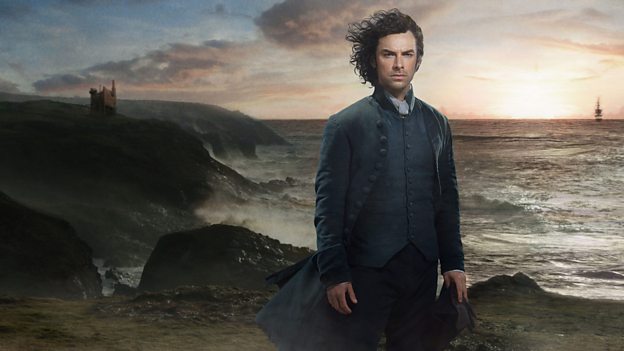 I love playing Ross Poldark and am proud to be a part of this production. The second series of 10 episodes presents a whole new set of challenges for both him and me and I can't wait for it to kick off again.Aidan Turner

Category: BBC One; Drama
Fans across the UK will be thrilled to hear that filming has begun this week in Cornwall for the second series of BBC One's Sunday night drama Poldark.

This series, produced by Mammoth Screen, will consist of 10 episodes, all written by Debbie Horsfield and adapted from the acclaimed novels by Winston Graham.

The first series peaked with 9.4 million viewers earlier this year, generating phenomenal media interest and making household names of the cast including Aidan Turner, who returns as hero Ross Poldark, and Eleanor Tomlinson, who plays his wife Demelza.

Aidan Turner says: "I love playing Ross Poldark and am proud to be a part of this production. The second series of 10 episodes presents a whole new set of challenges for both him and me and I can't wait for it to kick off again."

This series introduces other key characters to Winston Graham's sweeping 18th century saga of Cornish life, including John Nettles (Midsomer Murders) as Ray Penvenen, one of the county's wealthiest landowners, and Gabriella Wilde (Endless Love) as his niece Caroline Penvenen, a beautiful and manipulative heiress. Hugh Skinner (W1A) plays Unwin Trevaunance,a prospective MP who hopes that Caroline (and her fortune) will consent to marry him. But does Caroline's heart lie elsewhere?

Also back for the second series are Heida Reed as Elizabeth, Kyle Soller as Francis, Ruby Bentall as Verity, Jack Farthing as George Warleggan and Luke Norris as Dr Dwight Enys. Beatie Edney and Phil Davis return as Jud Paynter and his wife Prudie and Robin Ellis reprises his role as the Reverend Halse.

1790 and there is riot and revolution in the air. Ross Poldark must once again fight for his freedom when George Warleggan tries desperately to steal his mine and have him hanged as a revolutionary. Can Demelza save Ross from himself?

Crippled by debts, Ross and Francis try to heal old wounds by joining forces in a new mine free of the Warleggans. But Ross and Elizabeth's feelings for each other cannot be repressed, and Ross risks everything in a desperate smuggling venture. ‎Meanwhile, the fate of the Poldarks is tied to Dr Dwight Enys and Caroline Penvenen in unexpected ways.

The Poldark clan must learn to settle their differences once and for all, but ‎at what cost?

Polly Hill, Controller BBC Drama Commissioning says: “It's exciting to be bringing this wonderful cast back together as we continue the story of Poldark. Debbie has done a magnificent job once again, bringing the next two books to screen - so much happens she needed a further two episodes ! I know fans of the show will be once again gripped by what happens to all those much loved characters, as well as enjoying the new characters who have joined us.”

Debbie Horsfield says: "It’s really exciting to be back in Cornwall for the start of filming on Series 2. Needless to say it will be another rollercoaster ride for the Poldarks and we’re thrilled that that the BBC have given us an extended run of 10 episodes so that we can really do justice to books three and four of Winston Graham’s saga."

Damien Timmer, Managing Director of Mammoth Screen, adds: "'Poldark's first series struck a chord with audiences around the world, and we are determined to make series two just as memorable, with a whole new raft of characters entering the saga and brilliant stories for Ross and Demelza."

Poldark is adapted by Debbie Horsfield (Cutting It, The Riff Raff Element) and directed by William Sinclair (Vera, Misfits) and Charles Palmer ( Poirot, Death in Paradise, Lark Rise to Candleford). It is produced by Margaret Mitchell (Vera, Goodbye Mr. Chips, Poirot) and the executive producers are Debbie Horsfield, Karen Thrussell and Damien Timmer for Mammoth Screen and Liz Kilgarriff for the BBC.

Filming will take place across Cornwall and Bristol, including the Bottle Yard Studios, over the coming months and the series will transmit in 2016 on BBC One.