Filming underway on new series of Inside No. 9 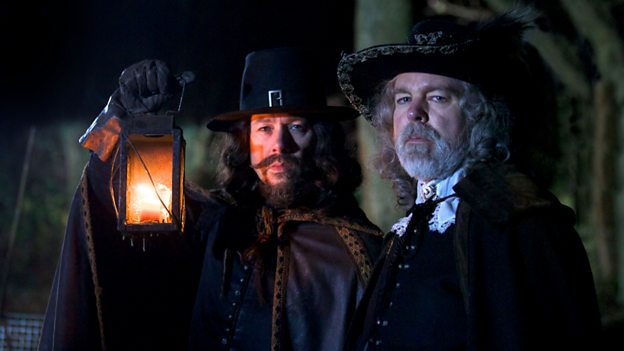 We are delighted to be handing over the keys to six new No. 9's, we hope they will amuse, shock, horrify and surprise...but not necessarily in that order.Steve Pemberton and Reece Shearsmith

Category: BBC Two; Drama; Commissions and casting; Comedy
Principal photography has begun on the brand new season of Inside No. 9, with a host of well-known faces joining Steve Pemberton and Reece Shearsmith in a second series of the critically-acclaimed and award-winning BBC Two comedy.

Each individual story in the series will once again be set in a different location with completely new characters. From a sleeper car on a French train to a séance in a grand Victorian villa, and from a 17th century village to a volunteer call centre, this is an anthology of tales of the genuinely unexpected, where the ordinary and mundane rub shoulders with the extraordinary and macabre.

Steve and Reece are also making their joint directorial debut on two episodes in the new series. They say: "We are delighted to be handing over the keys to six new No. 9's, we hope they will amuse, shock, horrify and surprise...but not necessarily in that order. Once again we have enjoyed working with some of the best comic talent in the country. Now we are getting old, it's nice not to have to play all the parts."

Inside No. 9 will return to BBC Two later this year.

Inside No. 9 is a BBC in-house production written by Steve Pemberton and Reece Shearsmith, executive produced by Jon Plowman (Absolutely Fabulous, W1A) and produced by Adam Tandy (The Thick Of It, Detectorists).

Inside No. 9 won two major international awards at the 2014 BANFF Rockies.

BBC In-house Comedy is the biggest producer of comedy in the UK and prides itself on working with the very best in comedy talent - established and new - both on and behind the screen, and is responsible for some of the country's most-watched and loved comedies across radio, online and all four BBC TV channels. In the last 12 months alone, the department has won 14 prestigious awards including Baftas, Rockies, RTS Awards and National Television Awards.

Recent BBC One hits include the multi-award-winning Mrs Brown's Boys and Miranda. A second series of David Walliams' Big School returned this autumn as will the third series of Adil Ray's Citizen Khan. And after a hugely successful Christmas Special last year, a brand-new series of Still Open All Hours is currently airing starring David Jason as Granville. A new adaptation of David Walliams' children's book The Boy In The Dress played out over Christmas, following hugely popular previous adaptations of Mr Stink and Gangsta Granny.

BBC In-house comedy also provides home grown programmes for BBC Three including Bluestone 42 and this winter two brand-new series Crims and Nick Helm's Heavy Entertainment. BBC Four this autumn saw Puppy Love on screen, written by and starring Vicki Pepperdine and Jo Scanlan. Coming this winter is In And Out Of The Kitchen with Miles Jupp, and Bob Servant for a second series. The Life Of Rock With Brian Pern and Up The Women return for second series - both of which are moving to BBC Two.

BBC Radio Comedy goes from strength to strength with many stand-out shows being adapted for TV, including In And Out Of The Kitchen. Ever popular long-running shows such as BBC Radio 4's The News Quiz and The Now Show continue to delight audiences and Radio 4's Just A Minute will this year celebrate its 900th episode - with the same host Nicholas Parsons.

Our emphasis on supporting new talent can be seen in The BBC Radio New Comedy Award which seeks out the brightest new comedy stars ever year. This year has also seen BBC Radio Comedy nominated for the prestigious Rose d'Or Awards; and an example of the continuing popularity of comedy podcasts can be seen in the fact that there has been over 90million downloads of Radio 4 Friday Night Comedy since its September 2007 launch.