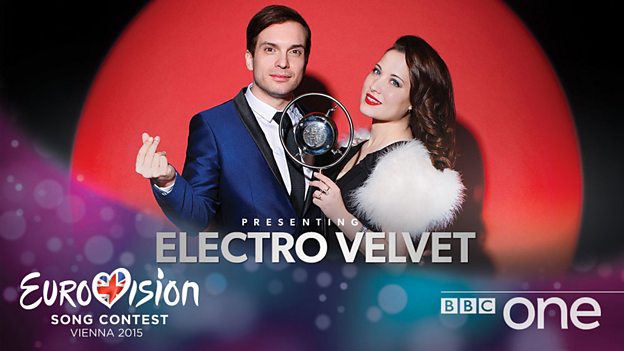 I am certain Electro Velvet will dazzle in Vienna for Eurovision's Diamond Anniversary and do the UK proud.Katie Taylor, UK Controller, BBC Entertainment Production

Category: BBC One; Radio 2; Entertainment; BBC Three
The BBC today confirms that Electro Velvet, a musical duo consisting of Alex Larke and Bianca Nicholas, will represent the UK at the Eurovision Song Contest 2015 performing the song ‘Still In Love With You'.

Alex, aged 35, from Welwyn Garden City and Bianca, aged 26, from Beckenham in Kent will be flying the flag for the United Kingdom at the 60th Eurovision Song Contest in Vienna in front of an estimated global audience of over 180 million viewers.

Electro Velvet’s debut song ‘Still In Love With You’ was selected from hundreds of entries received by the BBC following an open selection process inviting anyone who wished to submit a song for consideration. A huge variety of amateur and professional writers and performers submitted songs and ‘Still In Love With You’, an up-tempo electro-swing track penned by David Mindel and Adrian Bax White was selected as the UK entry for the 2015 Contest.

Alex says: “I feel incredibly privileged and humbled to be representing the United Kingdom in the Eurovision Song Contest in Vienna, for this massively historic 60th anniversary event. We have a fantastic song and will work as hard as is humanly possible to bring the contest home and make our great nation proud. It's time to get this party started! See you in Vienna!"

Bianca says: "I am so proud to have been chosen to be a part of the world’s biggest song contest - Eurovision! It's such an honour to represent the UK, especially in its 60th year too! I have never been to Austria before, and I can't wait to get out to Vienna and do my best, and I hope to make the UK proud!"

Guy Freeman, Editor of Special Events, says: “I am thrilled that Alex and Bianca will be representing the UK in this year’s competition. Our song for this special anniversary year has an up-tempo beat and an irresistibly catchy hook that is sure to get the party started in Vienna.”

Katie Taylor, UK Controller of Entertainment Production, says: "I am certain Electro Velvet will dazzle in Vienna for Eurovision's Diamond Anniversary and do the UK proud."

Born in Welwyn Garden City, Alex’s passion for music began at the age of 15 when he received a copy of the Oasis album (What’s The Story) Morning Glory?. From that moment on, Alex was transfixed and, from then on, knew that all that he wanted to do was play guitar, write and sing.

A self-professed fan of the Rolling Stones, Alex is currently lead singer for tribute group The Rollin’ Clones, one of the biggest Rolling Stones tribute shows in the world. Alex has toured the UK and internationally with The Rollin’ Clones and absolutely loves every minute of being with the band, the music and performing as Mick.
Alex’s musical tastes are much broader than just rock and he has recently worked with Big Beat pioneer Cut La Roc on his album Larger Than Life, which also featured the talents of Ice-T collaborator Donald D and Snow Patrol frontman, Gary Lightbody.

Outside of performing, Alex has taken all the musical experience he has gained over the years and used it to educate the next generation of budding musicians, working part-time in a primary school, imparting all the tips and tricks he’s learned from writing, singing and performing, plus teaching ukulele and recorder too.

Last year, Alex was privileged to work in a special needs school with children and young adults with profound to severe learning difficulties. He found it to be one of the most incredible, rewarding and fun things he has done in his life.

Bianca Nicholas was born in Beckenham, Kent and from an early age was interested in the performing arts. At just five years old, Bianca played the lead role in the Cannes Film Festival award-winning short film ‘Is It the Design on the Wrapper?’ and in her early teens, she appeared alongside Johnny Depp in the Hollywood blockbuster Sleepy Hollow. But at 15, Bianca decided she was determined to follow her true passion: music.
Bianca went on to sing at a string of high-profile charity events, which has seen her duet with Will Young, tour with Classical Brit winners Blake and perform for Princes William and Harry as well as the Duchess of Cambridge. Bianca also sang at the turning on of the Regent Street Christmas lights in 2011, where she performed her debut single 'Hold On To Your Dreams' which was a top 100 single and number 1 on the iTunes Vocal Chart - a huge achievement for an unsigned artist.

The single re-entered the vocal chart at number 2 in 2013 when the Heart FM Breakfast team played the song on air as part of their ‘Have a Heart’ charity appeal and more recently, Bianca appeared on The Voice UK in 2014 and her blind audition has now amassed over 250,000 views on YouTube.

Since The Voice UK, Bianca has kept busy with gigs and live session radio performances. All of which has led to her representing the UK alongside her friend Alex at the Eurovision Song Contest 2015.

David Mindel has had a successful career in song-writing, working with the likes of Olivia-Newton John, Barry Manilow, The Shadows, John Travolta, Mud and Musical Youth to name but a few.

Adrian Bax White is a classically trained multi-instrumentalist whose eclectic music career has spanned pop to fusion jazz with everything in between. Adrian has worked with a multitude of singers from multi Grammy award-winners such as John McLaughlin and Narada Michael Walden to underground indies such as Blue Orchids and acid jazz godfather Lonnie Liston Smith.

About the Eurovision Song Contest

As one of the 'Big Five' countries (UK, Spain, Germany, France, Italy), the United Kingdom does not have to perform at the semi-final stage of the competition and will gain automatic access to the Saturday grand finale. Austria, as the incumbent champion, and Australia, who have been invited to perform as part of the 60th anniversary celebrations, will also not perform at the semi-final stage.