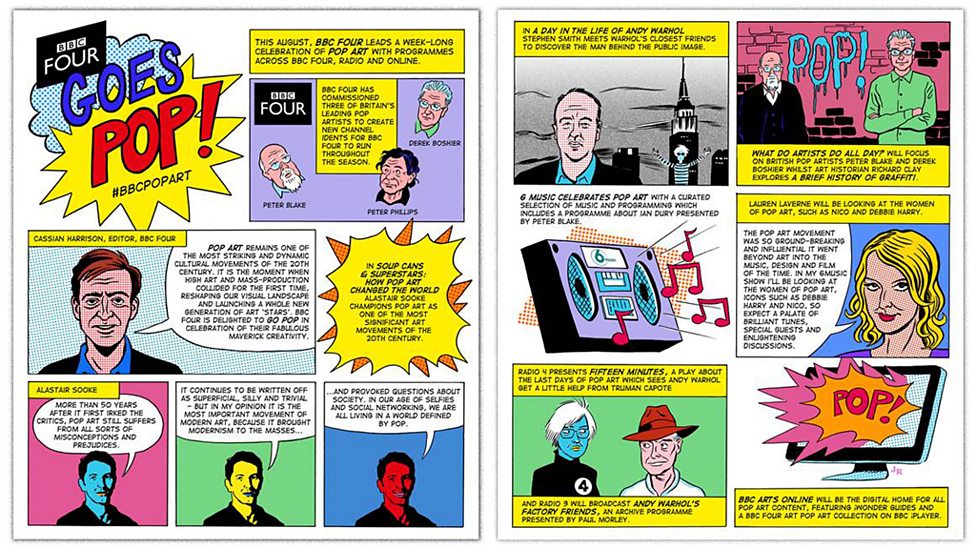 It is the moment when high art and mass-production collided for the first time, reshaping our visual landscape and launching a whole new generation of art ‘stars’.Cassian Harrison, Channel Editor, BBC Four

For BBC Four Goes Pop, the BBC has commissioned three of Britain’s leading pop artists - Peter Blake, Derek Boshier and Peter Phillips - to create three new channel idents for BBC Four, to run throughout the season. The trio starred in the seminal 1962 Ken Russell documentary about Pop Art, Pop Goes The Easel, when the movement drew on popular imagery which blurred the boundaries between 'high' art and 'low' culture.

The BBC’s week-long celebration of Pop Art will look at the influence of the art movement through special programmes on BBC Four, BBC Radio 3, BBC Radio 4 and BBC 6 Music.

Programmes on BBC Four include a documentary presented by writer and art critic Alastair Sooke, who champions Pop Art as one of the most significant - and influential - art movements of the 20th century; Steven Smith seeks to get closer to Andy Warhol, the man and artist, by experiencing a day in the life of the Pop Art superstar; whilst Peter Blake and Derek Boshier provide insight into their working practices in What Do Artists Do All Day?

BBC Arts online (bbc.co.uk/arts) will be the digital home for all Pop Art content, featuring exclusive programme extras and archive content as well as its own bespoke Pop Art collection and links to specially commissioned iWonder guides.

Cassian Harrison, Channel Editor, BBC Four, says: “Pop Art remains one of the striking and dynamic cultural movements of the 20th Century. It is the moment when high art and mass-production collided for the first time; reshaping our visual landscape and launching a whole new generation of art ‘stars’. BBC Four is delighted to go Pop in celebration of their fabulous maverick creativity.”

Alastair Sooke says: "More than 50 years after it first irked the critics, Pop Art still suffers from all sorts of misconceptions and prejudices. It continues to be written off as superficial, silly and trivial - but in my opinion it is the most important movement of modern art, because it brought Modernism to the masses and provoked serious questions about society. In our age of selfies and social networking, we are all living in a world defined by Pop. For me, it was a privilege to meet so many of the men and women who pioneered this hugely significant global art movement - as well as some of the younger artists who are keeping Pop's raucous spirit alive."

Lauren Laverne, says: ‘The Pop Art movement was so ground-breaking and influential it went beyond art into the music, design and film of the time. In my 6 Music show I’ll be looking at the women of Pop Art, icons such as Debbie Harry and Nico, so expect a palate of brilliant tunes, special guests and enlightening discussion as my listeners and I explore this creative powerhouse.’

In the centrepiece film (1x 90’) of the season, Soup Cans & Superstars: How Pop Art Changed The World, Alastair Sooke champions Pop Art as one of the most significant - and influential - art movements of the 20th century.

Far from being superficial and banal, as its critics claimed, the film reveals how Pop Art was a sophisticated response to the mass culture of the post-war world. Behind the surface glamour of its platinum pin-ups and comic book heroes, Pop Art used the lessons of the ad man to sell a satirical and often highly political message.

In charting its story, Alastair brings a fresh eye to the work of Pop Art superstars Andy Warhol and Roy Lichtenstein - and meets many of the biggest names in Pop Art, among them British artists Sir Peter Blake and Allen Jones, and leading US Pop artists Ed Ruscha, James Rosenquist and Claes Oldenburg.

He also explores how Pop's fascination with celebrity, advertising and the mass media was part of a global art movement, a phenomenon that will be celebrated this autumn in a major exhibition at Tate Modern.

And to show how Pop Art, over 50 years since it emerged, remains relevant in today's 24-7 consumer society, Alastair travels to China to discover how Pop is inspiring artists there.

A Day In The Life Of Andy Warhol - BBC Four

In this 1 x 60 film, Stephen Smith meets with many of Andy Warhol's friends and confidantes and gets closer to the man behind the enigmatic public image, experiencing for himself the hour by hour excitement of a day in the life of the Pop Art superstar.

What Do Artists Do All Day? - BBC Four

The strand will focus on British Pop Artists Peter Blake and Derek Boshier in 2 x 30’ films.

At 82 Peter Blake is one of Britain’s leading Pop Artists, and over his 60 year career (and counting) he has produced a celebratory body of paintings, collages and sculptures. The film charts Peter at work in his studio and his designs for the new Liverpool Dazzle Ship which launched earlier this year, revealing an iconic British artist as active now as he ever was.

Now in his 70s and based in Los Angeles, Derek Boshier studied at the Royal College Of Art and burst onto the British art scene in the 60s as one of the pioneers of the British Pop Art movement. Fifty years since the BBC last visited his studio, Derek invites director Zara Hayes to spend a day with him in LA as he completes a 6ft x 4ft drawing. An Englishman in LA, we meet Derek’s friends and family and visit his local haunts as he reflects on his life and career.

This 1 x 60’ film on BBC Four will see Art Historian Richard Clay explore the extraordinary story of graffiti. Richard will argue that graffiti has always been "of the people, by the people, for the people", and as such is the oldest form of Pop Art in the world.

It has been a constant within popular culture due to its accessibility, sometimes witty connotations and political statements. The values of this tradition, mixed with the power of the industrialised production of images, became core to the 20th century worlds of advertising, propaganda, counter propaganda - and finally art.

6 Music Celebrates Pop Art with a curated selection of music and programming in honour of this bold, influential creative movement. One ‘reason to be cheerful’ will be a programme about the life and career of iconic performer Ian Dury, presented by one of the most famous and influential British Pop Artists, Peter Blake. Blake taught Dury at Walthamstow Art College and will be playing tracks by him in this hour-long special, Peter Blake: Ian And Me (Sunday, 1-2pm).

Across the week, Lauren Laverne will be looking at the women of Pop Art, such as Nico and Debbie Harry (Monday-Friday, 10am-1pm). In Now Playing Tom Robinson will be curating the Pop Art-themed music suggestions of the 6 Music audience (Sunday, 6-8pm), and in a Freakzone special Stuart Maconie will be taking listeners on a journey into the weird and wonderful world of this artistic movement (Sunday, 8-10pm). Plus, all week The Album Of The Day selections will be relevant to the Pop Art movement, and there will be related music and documentary programming from the BBC Archive broadcast in the overnight slots.

Talking in his programme, Peter Blake says: “Pop Art was about trying to make an art that would be read in the same way as you would listen to music… Ian and I had a rapport, in that we both loved rock ‘n’ roll, but he was a rebel.”

Radio 4 will broadcast Fifteen Minutes, a play by Sarah Wooley about the last days of Pop Art when Modern Art became commodified big business, and how Andy Warhol - with a little help from Truman Capote - invented celebrity culture.

Set in New York in the heady days of Studio 54, in the late 1970s and early 80s, Fifteen Minutes looks at the later period in Andy Warhol’s life when Andy feared he was becoming forgotten, was clinging onto fame and earning money by hustling rich patrons for portrait commissions. The play explores Capote and Warhols’ relationship, Capote’s decline and Warhol’s resurgence, ending with Warhol at a celebrity birthday party. A young computer geek is setting up a computer for the host and he shows Warhol and Keith Haring that the computer has a drawing programme. They both begin to experiment with this new way of making art that will one day allow anyone to make art regardless of talent. This is the future and the computer.

A BBC Four Pop Art Collection curated by Alastair Sooke will be made available exclusively on BBC iPlayer. The collection features programmes including Pop Goes The Easel (1962), Roy Lichtenstein: Pop Idol (2004), Monitor 139: Joe Tilson And Peter Brook (1964), Release Pop Goes To The Hayward (1969) and The Visual Scene: Playing It Cool (1969). BBC Four Collections on BBC iPlayer uncover the archives to select classic full-length BBC TV programmes and make them available for audiences to enjoy once again.

There will be a selection of BBC iWonder guides and timelines created for the season, which will be available at bbc.co.uk/iwonder and via the BBC Arts Pop-Art season page, including:

What Happened When Pop Art Went To The Movies? This iWonder guide uncovers the incredible story of how Pop Art shaped cinema. It will explore why a visual art movement began to change the look and feel of film and inspire a generation of directors who looked to its forms, colours and synthesis of pop culture to bring life and vision to their own work and to audiences across the globe.

What Did British Pop Music Steal From Pop Art? Presented by 6 Music’s Stuart Maconie, this iWonder guide will explore the relationship between British bands and pop art, looking at how the look, attitude and even sound of British pop music has been influenced by pop art over many decades.

Pop Art timeline - This iWonder timeline will look at the development of the pop art genre, from the sources of inspiration for the movement in the early 20th Century through to its superstar artists in the 1960s, including content from the season’s television programming.

The above graphic can be downloaded as a PDF here.

Pop! The Art that Conquered the World is a BBC Arts Production for BBC Four Produced and directed by Jude Ho. The Executive Producer is Richard Bright and Commissioning Editor is Mark Bell.

A Day In The Life of Andy Warhol is a BBC Arts Production for BBC Four Produced and Directed by David Shulman. The Executive Producer is Richard Bright and Commissioning Editor is Mark Bell.

What Do Artists Do All Day? - Peter Blake is a BBC Arts Production for BBC Four Produced and Directed by Eric Haynes. The Executive Producer is Richard Bright and Commissioning Editor is Mark Bell.

What Do Artists Do All Day? - Derek Boshier is a Peek Films Production for BBC Four Produced and Directed by Zara Hayes. The Executive Producer is Richard Bright and Commissioning Editor is Mark Bell.

A Brief History of Graffiti is a BBC Arts Production for BBC Four Produced and Directed by Nick Clarke. The Executive Producer is Charles Furneaux and Commissioning Editor is Greg Sanderson.

Peter Blake: Ian and Me is produced by Joe Haddow for BBC 6Music 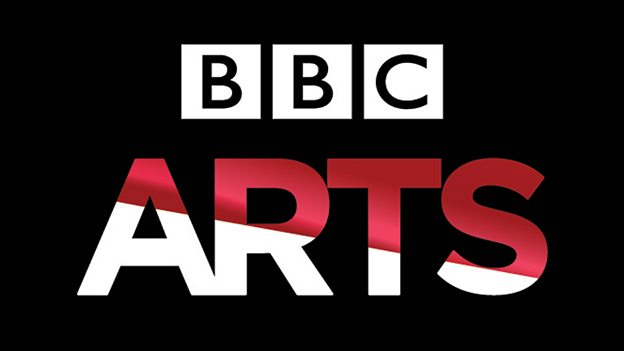