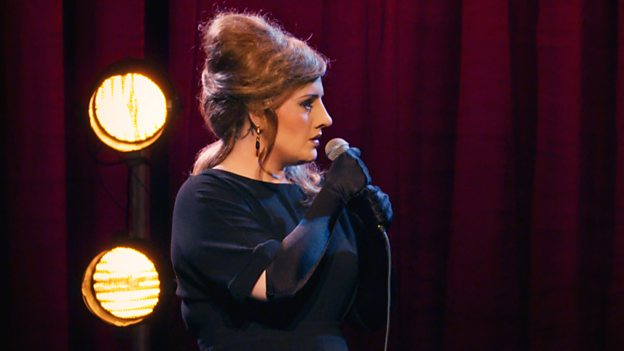 Adele was very keen to do the sketch and worked closely with my team to make this comedy-gold moment such a roaring success.Guy Freeman, executive producer of Adele at the BBC

Category: BBC Music; BBC One
Another day, yet another record broken for Adele... a sketch from BBC One’s ‘Adele at the BBC’ special has been viewed more than 37 million times in just two weeks, making it the most-watched video ever on the BBC YouTube channel.

The comedy sketch, ‘When Adele wasn't Adele... but was Jenny!’ has broken the previous record of 36.9 million views. It became an instant global hit on the BBC YouTube channel after being featured in the programme, a one-off special broadcast on Friday 20 November on BBC One. The television show has now been watched by 5.8 million people and an extended version featuring previously unseen footage will be shown on BBC One at 11.35pm on Friday 1 January.

The five-and-a-half minute clip - which was released straight after the programme aired - features the singer going undercover, complete with prosthetic nose and chin and long gloves to cover her tattoos, to participate in a fake audition to find the best Adele impersonator. Telling the others taking part that her name is Jenny, she says she is a full-time nanny and part-time impersonator and quips it’s been ‘a bit slow recently’ due to ‘not much demand’. Due on last, the other singers comfort ‘Jenny’ backstage when she tells them she feels sick ahead of her performance - but when she breaks into her hit Make You Feel My Love, we see the heart-warming reactions of the impersonators as they realise one by one that ‘Jenny’ is actually the real Adele.

One of the lookalikes who took part in the sketch, Talullah Windmill, says: “I am amazed the sketch has been so popular. Even though the day was one I'll never forget, I never thought it would be watched by so many and be this well received. All the comments left are so lovely, it is truly overwhelming.”

The previous Number 1 clip features Will Smith on The Graham Norton Show performing a song medley, including the theme to 90s sitcom Fresh Prince of Bel Air, with his son Jaden Smith, Alfonso Ribero, who played Carlton in the series, and DJ Jazzy Jeff. It has been on the BBC YouTube Channel for over two years and has now been knocked down to second place.

Bob Shennan, Director of BBC Music, says: “I’m delighted to see such a phenomenal response to the show in the UK, and to see the magical sketch gain a huge global audience who are enjoying and sharing the BBC’s content.”

Guy Freeman, executive producer of Adele at the BBC, says: “Adele was very keen to do the sketch and worked closely with my team to make this comedy-gold moment such a roaring success. She shows not only what a great sport she is, but also what a great comedy actor she is too.”

Marking her return to the music scene with this world exclusive one hour special - her first television performance since she performed Skyfall at the Oscars in 2013 - this sketch featured alongside performances of her much-loved classics and new material from her recently released album, plus an interview with Graham Norton about her life and career.

Notes to Editors
The BBC has supported Adele since the beginning of her career. Her first ever play was Daydreamer on Reggie Yates' BBC Radio 1 show. Hometown Glory was first played on the radio by Zane Lowe on Radio 1 in 2007 and she made her debut television performance on Later with Jools Holland on BBC Two in the same year, performing Daydreamer.

Adele at the BBC was commissioned by Jan Younghusband, Head of Commissioning, and the executive producer was Guy Freeman.