We may well look back at this trial as a watershed moment in the history of broadcasting.Matthew Postgate, Controller, BBC R&D

Category: Online and interactive; Sport; Scotland
BBC Research and Development has today announced it will broadcast certain elements of the Glasgow 2014 Commonwealth Games live in Ultra-High Definition (UHD) at a public showcase in the host city.

The special R&D production will be shown live in the Glasgow Science Centre for the duration of the Games, giving people a unique opportunity to see the very first live UHD broadcast of a Commonwealth Games, which offers up to four times as much detail as standard HD.

The public showcase forms part of BBC R&D's ongoing experiments to explore and help define the future of television, and will also include a range of other demonstrations featuring other partners and collaborators to be announced soon. These demonstrations will be available from 10am-5pm in the Glasgow Science Centre’s Clyde Suite and will form part of the wider BBC at the Quay festivities.

In another broadcasting first, the Commonwealth Games UHD broadcast will be the first major live event to be produced and distributed entirely over Internet Protocol (IP) networks, representing a major milestone as broadcast and IT technologies converge. This will be delivered using an initial version of BBC R&D’s vision for a new broadcasting system, which aims to take advantage of the increasing speed and ubiquity of internet networks and IT technology. BBC R&D is working closely with partners to ensure this new broadcasting system can deliver a range of benefits to the industry and audiences, including:

Matthew Postgate, Controller, BBC R&D, said: “We may well look back at this trial as a watershed moment in the history of broadcasting. By proving for the first time that complex events can be created and delivered completely over IP technology, we’re opening up a world of possibilities to programme makers and the wider industry. Not only could BBC R&D’s vision for a new broadcasting system help producers create programmes more efficiently and cost-effectively, but it allows them to take advantage of data like never before, offering new editorial options and ways of improving the experience for audiences.”

A key aspect of BBC R&D’s research into a new broadcasting system is defining what live programme production would need if it worked directly on IP networks. This includes high bit-rate and low delay streaming, timing and synchronisation, distributed configuration and control, real-time data, flexible reuse of processing, and access to production content and information. BBC R&D’s experimental IP Production Gallery will be the hub of the UHD operations, which will also be on display at the Glasgow Science Centre.

The end-to-end IP workflow for BBC R&D’s new broadcast system is not specific to any network or service provider. For this particular trial BBC R&D is collaborating with several strategic research partners, including Virgin Media Business on high-speed fibre optic connectivity from the stadia to R&D facilities in Glasgow and Salford; the Jisc network, Janet, on the production network from R&D facilities to the IP Production Gallery in the Glasgow Science Centre; with the network being underpinned and supported by Cisco Infrastructure.

The last piece of the chain is delivering the live UHD coverage from the IP Production Gallery ‘to the home’ which will be done over existing super-fast broadband infrastructure to UHD TVs in the Science Centre. The live UHD coverage will also be broadcast over Digital Terrestrial Television (DTT) as an extension to the recent trial announced with Arqiva, to explore a future hybrid DTT / IP broadcasting model. 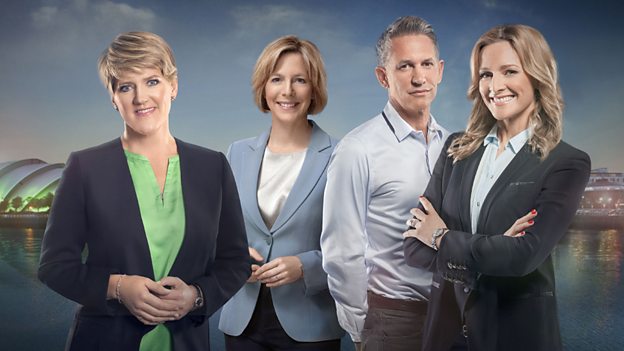 Details of BBC coverage of the 2014 Commonwealth Games