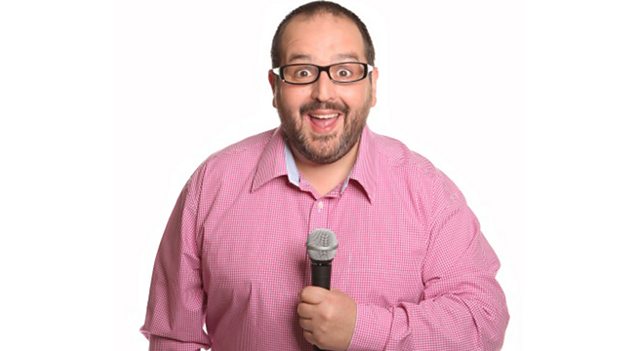 The North is synonymous with great British comedy and the BBC has always found a home for the best of them. The Salford Sitcom Showcase captures this on-going commitment to delivering the next best in comedy writing and performing. There’s nothing like the instant feedback of a live audience to tell you what does and doesn’t work in a new comedy."Shane Allen, Controller, Comedy Commissioning

Category: Comedy
Four comedy pilots currently in development for BBC Comedy will be shown to a live studio audience over three consecutive nights (17-19 March) in the Salford Sitcom Showcase, part of the BBC’s Salford Comedy Festival.

Supported by BBC Comedy Commissioning in collaboration with BBC North, this is the third year the Sitcom Showcase has given audiences the chance to see new comedies in development. Previous successes have included Citizen Khan and Hebburn, which were shown on BBC One and BBC Two respectively.

Shane Allen, Controller of Comedy Commissioning, says: “The North is synonymous with great British comedy and the BBC has always found a home for the best of them. The Salford Sitcom Showcase captures this on-going commitment to delivering the next best in comedy writing and performing. There’s nothing like the instant feedback of a live audience to tell you what does and doesn’t work in a new comedy.”

Peter Salmon, Head of BBC North, says: “Comedy is crucial to the success of the BBC in the North. From The Royle Family to Last Of The Summer Wine, Victoria Wood to Peter Kay, some of our biggest hits and best-loved faces have come from these parts and the Salford Comedy Festival is about finding the next generation of talent and ideas to delight our audiences. This region isn't just famous for sport and music - we make great comedy too - so it's great to welcome top industry practitioners to Greater Manchester from all over the world this week.'”

Helen Spencer, the BBC’s Salford Comedy Festival Director says: “The Salford Sitcom Showcase has become an important part of the BBC Comedy landscape, earning its industry stripes following commissions for both Citizen Khan and Hebburn. It allows the audience to have a sneak preview of some of the latest comedy pilots in development for BBC television, including exclusive screenings and theatrical performances by some of the UK's favourite comedy actors.”

The four comedies in the line-up next week are:

Only one man stands between the residents of Belmont Road and lawlessness, disorder and their sanity. Ex-policeman Ed Halliwell (Simon Day) is a man with time on his hands. He's been on indefinite sick leave since being injured in the line of duty (he pulled a muscle lifting a tray of pasties at a cycling proficiency event). A man in search of a role, he spends more time meddling with his neighbours' lives than he devotes to his wife and kids. Despite the chaos he unleashes, Ed manages to bring together three disparate households, who have nothing in common but their postcode, in unity - against Ed Halliwell. The cast for the Neighbourhood includes Simon Day, Hannah Waddingham, Joshua Pascoe, Reece Buttery, Nicholas Burns, Belinda Stewart- Wilson, Amit Shah, Gem Carmella, Matthew Ashforde, Sophie Fletcher, Paul Charlton, Deddie Davies and Rhys Thomas. The Neighbourhood is a Tiger Aspect production. The executive producer is Ben Cavey, the director is Martin Dennis and the producer is Margot Gavan Duffy.

Welcome Home is a big, warm-hearted sitcom about what happens when you get divorced but can't afford to move out. Add in an interfering gran, an attractive neighbour and a distracting sidekick and life becomes very complicated. The cast includes Justin Moorhouse, Maureen Lipman, Lloyd Langford, Jodie Prenger, Amara Karan and Daniel Ings. Welcome Home is a BBC Comedy Production. The executive producer is Rebecca Papworth, the director is Jonathan Gershfield, and the producer is Steve Canny.

Tools is a warm, quirky, single-camera ensemble sitcom set in a Homezone DIY superstore (junction nine, off the M6, next to the big Asda). It's a place where the dream to create the perfect home meets the reality of a windswept retail park just outside Wolverhampton. It's a world immediately recognisable to anyone who's traipsed around the canyon aisles of a DIY store, looking for the one size of screw that's never in stock. We join mid-life-crisis manager Greg and his enthusiastic, well-meaning but often frustrating team as they try to shepherd the customers through a bank holiday weekend, and some of the most important decisions of their adult lives - whether to paint the walls ivory, champagne or off white. Tools is produced by Roughcut TV, and the cast includes Mark Benton, Elizabeth Berrington, Jessie Cave, Jody Latham, Asim Chaudhry, Tony Law, Fergus Craig, Daisy Beaumont, Alan Williams and James Lance. The executive producer is Ash Atalla, the director is Paul Harrison, and the producer is Alex Smith.

Leo’s had a bad day. He’s been fired (again), is being given a hard time by his mum and, to cap it all, his blind date fails to show up. But then he bumps into Judy and finds himself deeply attracted to this surprising and beguiling woman. They bond over drinks and, unfazed by the fact that there’s a bit of an age gap between them, arrange to meet the following evening. Leo’s mother is unhappy that he’s having dinner with an older woman. But Leo doesn’t care what she thinks; he knows that he’s just met someone very special. The cast includes Harry Hepple, Rebecca Root, Denise Welch, Janine Duvitiski, Jonny Dixon, Nigel Betts, Simon Ludders and Milanka Brooks. Writer Elliott Kerrigan was one of the winners of the Trans Comedy Award, a BBC Writersroom talent search run in partnership with Trans Comedy to encourage writers to promote a positive portrayal of Transgender people in mainstream comedy. Boy Meets Girl is a Tiger Aspect production. The executive producer is Sophie Clarke-Jervoise, the director is Paul Norton Walker, and the producer is Margot Gavan Duffy.

The Salford Sitcom Showcase is part of the Salford Comedy Festival, which takes places over various venues around Media City from 17 to 19 March. Other events taking place include:

Sony Award-winning and Perrier nominated Sheffield comedian Tom Wrigglesworth brings Hang Ups to the Salford Comedy Festival. This is a chance to listen in to Tom's telephone calls home to his parents. As heard on The Now Show, The News Quiz and of course Tom Wrigglesworth’s Open Letters, Tom is BBC Radio 4's comedy consumer crusader and he's back with a new series that will give us an insight into Tom's world when we listen in on his phone calls home in Tom Wrigglesworth's Hang Ups. So join us for a bit of totally legal phone hacking.

On Tuesday 18 March and March 19 between 10am and 4pm, comedy masterclasses and performances are being organised by BBC Writersroom.

In conversation with Greg Daniels, the multi award-winning American TV writer, producer and director, best known for developing The Office for NBC, and co-creating Parks and Recreation and King of the Hill, where he was the initial showrunner for all three series.

Will Saunders (Executive Producer, BBC Comedy) and Jon Aird (Producer, BBC Comedy) will be sharing tips on what makes great short-form comedy, how to stand out in the digital world and strategies the next generation of comedy creators are currently using to reach massive audiences.

For more details and ticket information for the Writersroom events, see bbc.co.uk/writersroom/opportunities/salford-comedy-festival-writersroom-events