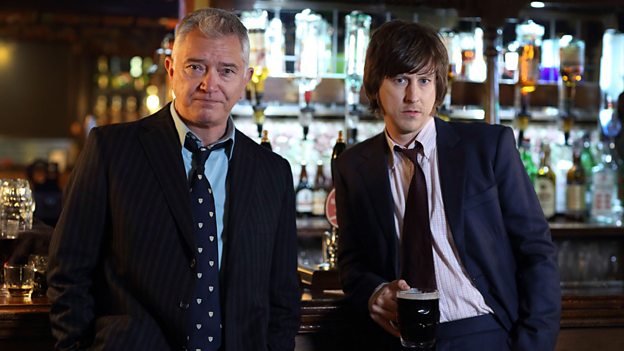 We’re delighted to be filming Inspector George Gently again in Durham and the North East – and it’s fantastic to be able to recreate the world of 1969. There were such vivid and colourful changes in society at that time - and hopefully our series will continue to give a real portrait of the age."John Yorke, Executive Producer

Category: BBC One; Drama
It’s 1969 and Gently and Bacchus are both suffering from their own physical and mental scars several months after the horrific shootings that nearly claimed their lives in Durham Cathedral.

The classic series Inspector George Gently returns for its seventh series, with four new feature-length episodes filmed on location in Northumberland for BBC One.

INSPECTOR GEORGE GENTLY has become an audience winner and is renowned as a series that lovingly recreates the Sixties in perfect, nostalgic detail – and Martin Shaw and Lee Ingleby make the perfect police partnership, full of warmth, humor and attack. In this new series they discover they have different approaches to a world that is changing very fast.

As the series opens, Gently has been pushing himself to full fitness and is back at work, while Bacchus is still recuperating from his serious injuries in a police convalescent home…

Gently Between The Lines by Tim Prager, sees Gently shocked to receive Bacchus’s resignation, but he soon realises that his sergeant has lost his confidence. Setting about to fix Bacchus, Gently insists that whilst he serves out his notice, he needs him to help investigate a death in custody. The Newcastle police have arrested rioters as they tried to clear a slum due for demolition. The next morning one of the protesters is discovered dead in the cells by WPC Rachel Coles (LISA MCGRILLIS – Hebburn, The Pitman Painters). This will turn into a case that will have both Gently and Bacchus questioning what it means to be a police officer at a time when attitudes to the police are changing. They are no longer the trusted, familiar, local “bobbies on the beat”. Police officers are now being seen as agents of the state. Cast includes: ROBERT PUGH (The Shadow Line, Game of Thrones), STEVE EVETS (Rev, Five Days), RUTH GEMMELL (Inside Man, Utopia), MATT STOKOE (The Village, Misfits) and CAROLINE O’NEILL (Doctors, Holby City).

Blue For Bluebird by Jess Williams, takes Gently and Bacchus to the Blue Bird Holiday Camp, to investigate staff and holidaymakers, when the body of one of the entertainers is washed up nearby. The colourful inmates of the holiday camp, from the flamboyant owner and his sister, to the chalet girls, performers, lifeguards and guests, throw the investigation sideways as Gently and Bacchus uncover a story of jealousy, ambition and the dark underbelly of the permissive society. PC Rachel Coles (LISA MCGRILLIS) is now part of the support system for Gently and Bacchus at the police station with her modern policing ways….Cast includes: PIXIE LOTT in her television drama debut, LEE BOARDMAN (Coronation Street, Great Night Out), NEIL MCDERMOTT (Eastenders, Doctor Who), ANDREA LOWE (DCI Banks, Coronation Street), EMMA FIELDING (The Cranford Chronicles, Waking the Dead), JODIE COMER (My Mad Fat Diary, Casualty) and LISA RILEY (Waterloo Road, Emmerdale).

Gently With Honour also by Jess Williams. When two deaths connect in an unexpected way, Gently finds himself drawn into the world of drugs and LSD, and considering a cold war conspiracy. In the process of his investigation Gently relies on the help of an old friend – Cast includes: JEMMA REDGRAVE (Cold Blood, Bramwell), CELYN JONES (Da Vinci’s Demons, Casualty), WILLIAM ASH (Waterloo Road) and OLIVER MILBURN (Coronation Street, Mistresses).

Gently Going Under by Mike Cullen sees the painful effects that the pressures on the coal mining industry in Northumberland have on a close-knit pit community. A suspicious death in the mine in Burnsend leads Gently and Bacchus to explore the tensions and relationships in a community whose seams have been ripped wide open by politics – and discover grudges that date back to World War II. Cast includes: JACK DEAM (Shameless, DCI Banks), LUCY COHU (The Queen’s Sister, Torchwood, Cape Wrath) and MICHAEL SOCHA (Being Human, This is England ’86).

Executive producer John Yorke says: "We’re delighted to be filming Inspector George Gently again in Durham and the North East – and it’s fantastic to be able to recreate the world of 1969. There were such vivid and colourful changes in society at that time - and hopefully our series will continue to give a real portrait of the age."

INSPECTOR GEORGE GENTLY VII is filmed on location in Durham and the North East.

For further information please contact Deborah Goodman on 020 8959 9980 or publicity@dgpr.co.uk