Edinburgh Castle hosts live concert for BBC One this summer 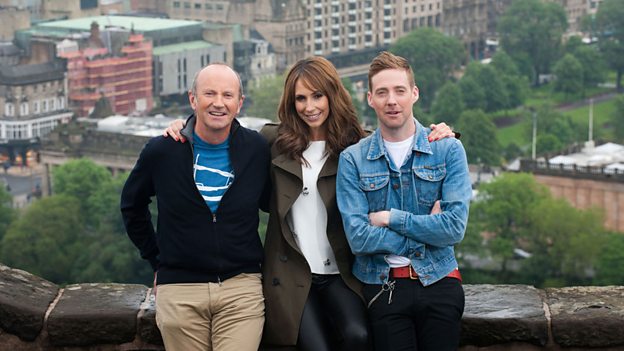 I am so excited to be presenting Live At Edinburgh Castle with such an incredible line-up. I can't imagine a better backdrop than Edinburgh. It is going to be a fantastic night for those coming along or watching at home.Alex Jones

Category: BBC One; Entertainment; Orchestras; Comedy
A spectacular concert Live At Edinburgh Castle with a glittering array of big names will be shown on BBC One, ahead of the opening ceremony of the Commonwealth Games in Glasgow.

The music will also be interspersed with comedy on the night, as Bill Bailey performs his unique brand of musical humour with the BBC Scottish Symphony Orchestra and Fred MacAulay makes a special guest appearance.

Alex Jones, Kaiser Chiefs frontman Ricky Wilson and Fred MacAulay launched the concert on the grounds of Edinburgh Castle today ahead of more than 8,000 tickets going on sale at 9am on Friday 6 June.

Presenter Alex Jones says: “I am so excited to be presenting Live At Edinburgh Castle with such an incredible line-up. I can't imagine a better backdrop than Edinburgh. It is going to be a fantastic night for those coming along or watching at home.”

Comedian Fred MacAulay adds: “This is a really great event to get the party started for the Commonwealth Games, and to get so many great artists on the one stage makes it very special. I hope that, not only the people of Edinburgh, but also the whole of the UK enjoy the show.”

Some of the performances will be accompanied by the BBC Scottish Symphony Orchestra and a house band, led by Mike Stevens, who has worked with artists including Gary Barlow and Annie Lennox.

Executive Producer Guy Freeman says: “We are delighted that such an exciting array of incredibly talented artists are coming together for what will undoubtedly be a magical night, at this iconic venue. With rock, pop, classical and comedy performances, it will be a great summer party, for everyone in the family to enjoy.”

Information on the concert and how to get tickets is available at bbc.co.uk/edinburghcastle

Live At Edinburgh Castle is part of the BBC’s year-long contribution to the Glasgow 2014 Commonwealth Games. The BBC is the domestic broadcaster for Glasgow 2014 and, in addition to comprehensive sports coverage during The Games in July and August, the Corporation has also unveiled a wide-ranging package of on-air and off-air output and events throughout 2014.