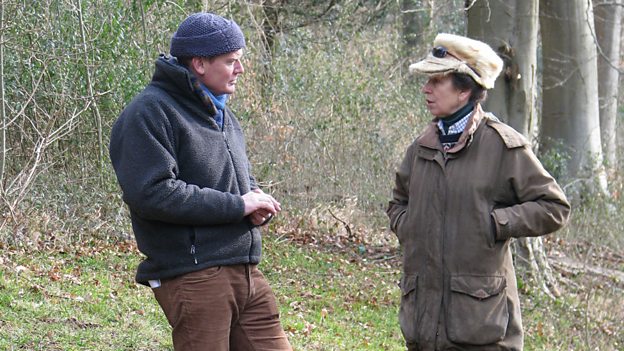 HRH Princess Anne is a working farmer who is also patron of nearly 50 countryside organisations - as such she has a unique perspective on Britain's current rural agenda.Bill Lyons, Executive Editor, Countryfile

Category: BBC One
BBC One’s Countryfile has secured an exclusive interview with Her Royal Highness, Princess Anne to be shown Sunday 6 April at 7pm.

Countryfile’s Tom Heap conducted the interview at Gatcombe Park in Gloucestershire, which The Princess Royal runs as a working farm, where she discussed many of the big issues confronting the British countryside today.

With nearly 40 years’ experience of farming, The Princess Royal tells how she came to the farming industry and in today’s world how she has had to diversify to ensure Gatcombe Park’s existence.

The interview reveals how she has worked over the years to address many of the rural problems, from sharing her views on genetically modified food, to the importance of continuing to produce rare breeds and the management of bovine TB in the UK.

She will discuss horse welfare and raises the question again, that perhaps eating horsemeat be considered, to give value to animals that might otherwise be neglected. Discussing affordable housing in the countryside, she tells of the methods she thinks would be effective and efforts she has made to work to contribute to that aim as well as talking about her passion for getting younger people involved in farming and the decision of her nephew, Prince William, to take up a farming career.

Bill Lyons, Executive Editor of Countryfile, says: "HRH Princess Anne is a working farmer who is also patron of nearly 50 countryside organisations - as such she has a unique perspective on Britain's current rural agenda. Countryfile will explore her views in a frank and wide-ranging interview which I'm sure will offer our viewers some very surprising insights."