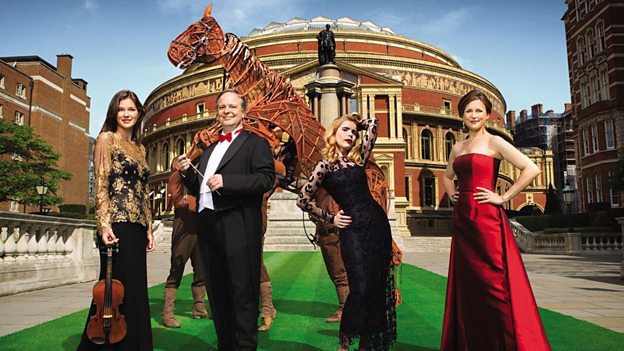 Musicians from around the globe will gather in South Kensington this summer to celebrate a wealth of classical music."Roger Wright, Director BBC Proms and Controller BBC Radio 3

Category: BBC One; BBC Two; BBC Four; CBeebies; Radio 1; Radio 2; Radio 3; Radio 5 Live; Online and interactive; Proms; Orchestras
Details of the 2014 BBC Proms are announced today, revealing the wide-ranging programme of events planned for its 120th season. Opening at the Royal Albert Hall on 18 July 2014 the festival promises two months of many of the world’s greatest artists, composers, orchestras and ensembles across 92 concerts including four Last Night celebrations around the UK.

Global classical music is at the heart of the 2014 Proms with more international orchestras performing than ever before. Nearly 50 years after the first appearance of a non-British orchestra at the Proms, 10 international ensembles from around the globe appear for the first time including orchestras from China, Greece, Iceland, Lapland, Qatar, Singapore, South Korea and Turkey. Some of the world’s most renowned orchestras make welcome returns to the festival including the Berlin Philharmoniker, Cleveland Orchestra, Budapest Festival Orchestra, West-Eastern Divan Orchestra and Leipzig Gewandhaus Orchestra. With Promming tickets remaining at £5 for the ninth year running, the finest music making from around the globe is made accessible for the widest possible audience.

A century after the outbreak of the First World War the Proms reflects on the music, musicians and musical legacy of the Great War. Works by composers who lost their lives in the trenches such as Butterworth, Stephan and Kelly, sit alongside the music of composers writing years after the conflict including Benjamin Britten’s War Requiem, based on the poetry of Wilfred Owen, and Sally Beamish’s violin concerto inspired by Erich Maria Remarque’s novel All Quiet on the Western Front. On Sunday 4 August, marking the day Britain entered the war, there will be a special Late Night Prom featuring the second of two world premieres by the late John Tavener.

Collaborating with the National Theatre for the first time, the War Horse Prom features life-size puppets from the internationally acclaimed production, alongside music performed by the Proms Military Wives Choir directed by Gareth Malone. Discovered in the Royal Academy of Music’s archive, the New War Hymn written by Sir Henry Wood, founder of the Proms, in response to the outbreak of the First World War, will be given its modern day premiere as part of the Prom.

Celebrating 150 years since the birth of Richard Strauss the Proms features three of his complete operas and a host of instrumental and choral works. Glyndebourne Festival Opera, under chief conductor Robin Ticciati, brings Der Rosenkavalier, while the final weekend in August sees consecutive performances of Salome, with Donald Runnicles and the Deutsche Oper Berlin in its debut performance at the Proms, and Elektra, with Semyon Bychkov and the BBC Symphony Orchestra. Singing the title roles, two of the world’s leading Strauss interpreters, Nina Stemme and Christine Goerke, lead remarkable casts.

For the first time in a single season both Bach’s St John and St Matthew Passions will be performed at the Proms. James Gilchrist, internationally renowned for his interpretation of the Evangelist in the St John Passion, will perform the role with the Zurich Chamber Orchestra under Sir Roger Norrington, and Sir Simon Rattle brings Peter Sellars’s staging of the St Matthew Passion with the Berlin Philharmoniker and a stellar cast led by Mark Padmore.

The Proms continues to offer a wide range of music with exciting debut performances by Paloma Faith and Rufus Wainwright. The Pet Shop Boys perform the world premiere of A Man from the Future, based on the life and work of Alan Turing. Laura Mvula returns for her own Late Night Prom and John Wilson and his orchestra give a staged performance of the Shakespeare-inspired musical Kiss Me, Kate in its Proms debut. The first BBC Sport Prom, hosted by Gabby Logan, brings together the world of music and sport, and the Proms teams up with the BBC’s pre-school channel, CBeebies, for two special concerts. The breadth of repertoire across the Late Night Proms series includes Beethoven’s Missa solemnis, a recreation of Count Basie and Duke Ellington’s legendary Battle of the Bands and the world premiere of Benedict Mason’s Meld, a brand new musical landscape exploring the Royal Albert Hall as it has never been explored before.

The 80th birthdays of two of Britain’s most important living composers, Sir Harrison Birtwistle and Sir Peter Maxwell Davies, are celebrated. There are also significant birthdays for British conductors with Donald Runnicles at 60, Sir Andrew Davis at 70, Sir Roger Norrington at 80 and Sir Neville Marriner at 90, all performing during the festival. The work of Lancastrian composer William Walton is also in focus with works ranging from his early witty ‘entertainment’ Façade to rarities such as Variations on a theme by Hindemith.

In the spirit of the Proms’ enduring mission to make the best classical music available to everyone, in 2014 there will be more Proms content available to listen to online for longer than ever before across PC, mobile and tablet. With exciting new digital additions, including a dedicated Proms button on the BBC iPlayer Radio app, six interactive BBC iWonder guides, and the use of BBC Playlister, audiences can enjoy the Proms whenever and wherever they like.

BBC television welcomes a new roster of presenters to lead the Proms broadcasts across BBC One, BBC Two and BBC Four, including soprano Danielle de Niese, organist Wayne Marshall and BBC News presenter Razia Iqbal. A second series of BBC Two’s Saturday evening review show, Proms Extra, hosted by Katie Derham, will introduce audiences to a wealth of musical guests. Every Prom is broadcast live on BBC Radio 3 and the audio streamed online in HD quality, with additional broadcasts on Radio 1, Radio 2 and for the first time on both Radio 4, with a commission for its PM programme, and Radio 5 live in its 20th anniversary year.

Sir Andrew Davis will conduct the First Night of the Proms marking his 70th birthday with a performance of Elgar’s The Kingdom, and Sakari Oramo conducts the Last Night of the Proms for the first time. Oramo will be joined by star soloists violinist Janine Jansen and baritone Roderick Williams to lead the Last Night celebrations. Rufus Wainwright, who gives his own Late Night Prom a few days earlier, performs at Proms in the Park, Hyde Park alongside Earth, Wind and Fire and there will be Last Night celebrations around the UK in Belfast, Glasgow and Swansea.

The Proms’ ongoing commitment to New Music is demonstrated with 12 world premieres (10 of which are BBC commissions) and 23 European, UK and London premieres. Alongside some of the most popular violin works in the repertoire audiences are invited to explore some lesser-known and brand-new gems including violin concertos by Moeran, Mathias, Sally Beamish and Gabriel Prokofiev.

Roger Wright, Director BBC Proms and Controller BBC Radio 3, says: "The BBC Proms is the world’s largest and longest-running music festival which, over eight weeks every summer, welcomes the world’s leading orchestras, conductors and soloists. With £5 Promming tickets for the ninth year running and more ways than ever for people to enjoy the events in person, on radio, television and online, the BBC’s on-going commitment to running the festival allows the Proms to be one of the best value-for-money experiences anywhere. Musicians from around the globe will gather in South Kensington this summer to celebrate a wealth of classical music."

For full details of the season please visit: bbc.co.uk/proms

An online version of the BBC Proms press pack, including the launch film, is available here