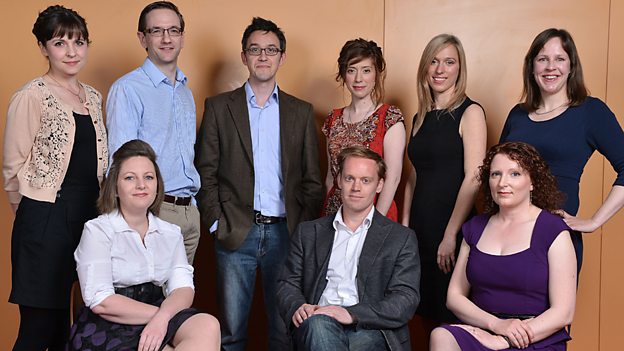 This year's applicants showed a sharp sophistication about how their research might make strong programmes - and a real willingness to reach beyond academia into the lives of our audience, and to find new formats to do that.” Matthew Dodd, Head of Speech programming, BBC Radio 3

Category: Radio 3
After a nationwide search, BBC Radio 3 and the Arts & Humanities Research Council (AHRC) have today unveiled the ten academics that have been named New Generation Thinkers 2013.

The partnership between BBC Radio 3 and the AHRC aims to find the academic broadcasters of the future - the brightest minds who have the potential to turn groundbreaking ideas into fascinating radio programmes.

The 10 winners will spend a year working with Radio 3 presenters and producers to develop their research and ideas into broadcasts. They will make their debut appearance on Radio 3's arts and ideas programme, Night Waves, on successive editions beginning Monday 3 June and will be invited to make regular contributions to the network throughout the year. They will deliver talks at Radio 3's annual Free Thinking Festival of Ideas at the Sage, Gateshead in October 2013. The academics will also have an opportunity to develop their ideas for television, including working with BBC Television Arts to make short taster films to be shown on bbc.co.uk/arts.

The scheme received hundreds of applications from academics who are at the start of their careers and are passionate about communicating modern scholarship to a wider audience.

Following a six-month selection process, the winners were chosen from a group of 60 finalists, who attended a series of day-long workshops at the BBC's bases in Salford and London. The 10 were chosen by a judging panel made up of producers from Radio 3 and BBC Television Arts and academics from the Arts & Humanities Research Council.

Matthew Dodd, Head of Speech programming for BBC Radio 3, says: "Radio 3 commissions and nurtures new talent across music and the arts - and the New Generation Thinkers scheme is an integral part of that. Radio 3/AHRC New Generation Thinkers is a unique scheme: It's a partnership that helps academics begin thinking about the public dissemination of their work at the very start of their careers and make broadcasting integral to what they do. This year's applicants showed a sharp sophistication about how their research might make strong programmes - and a real willingness to reach beyond academia into the lives of our audience, and to find new formats to do that.”

Professor Rick Rylance, Chief Executive of the Arts & Humanities Research Council, says: “This scheme, the collaboration with enthusiastic colleagues from BBC Radio 3 and our work with the talented researchers who apply, continue to be highlights of the year's activities. We are delighted with the breadth of subjects covered and the range of cross-disciplinary projects being presented in innovative and engaging ways. This is generation three of the New Generation Thinkers and our hope is that the previous winners and the newcomers will continue to spread the word about the enormous public appetite for hearing about arts and humanities research."

The New Generation Thinkers 2013 are:

Sarah Dillon
University of St Andrews
Sarah Dillon’s work looks at the relationship between contemporary literature and science and explores how the reading habits of scientists have influenced the way that they think.

Jules Evans
Queen Mary, University of London
Jules Evans explores the direct influence of ancient Greek philosophy on Cognitive Behavioural Therapy (CBT) and how ancient philosophy can act as a practical form of therapy for the emotions.

John Gallagher
University of Cambridge
John Gallagher's research looks at the study of foreign languages in 16th and 17th century England, and asks how English-speakers abroad went about making themselves understood. His research uses a variety of source materials, from the first printed phrasebooks and language manuals to letters and travel accounts written by first-hand observers.

Alice Hall
University of York
Alice Hall works in the field of contemporary and global literature. She has research interests in the areas of literature and the body, cultural representations of disability, autobiographical fiction, memory, and medical humanities.

Christopher Harding
University of Edinburgh
Christopher Harding researches the modern West's cultural dialogue with Japan and India. He looks in particular at how religion, psychology, and psychiatry have become increasingly intertwined, changing the way we think about spiritual versus mental and emotional health.

Sarah Peverley
University of Liverpool
Sarah Peverley is a medievalist who specialises in Anglo-Saxon, Medieval and Renaissance literature. Her current research focuses on texts produced during The Wars of the Roses, medieval kingship, and manuscript culture.

Fern Riddell
King's College London
Fern Riddell is a cultural historian who specialises in entertainment, sex, and the working class in the Victorian and Edwardian eras.

Gregory Tate
University of Surrey
Gregory Tate studies the ways in which Victorian poets borrowed from and contributed to new scientific ideas about the mind in the 19th century.

BBC Radio 3 broadcasts classical music, jazz, world music, arts and over 30 new drama programmes a year. As the home of classical music, BBC Radio 3 features more live classical music programming than any other broadcaster and is the home of the BBC Proms, broadcasting every Prom live and over 600 complete concerts a year. The station is the largest commissioner of new musical works in the country and is committed to supporting new talent, from composers to writers and new young performers, through schemes such as World Routes Academy, New Generation Artists and New Generation Thinkers.

The Arts & Humanities Research Council (AHRC) supports research and postgraduate study in the arts and humanities, from languages and law, archaeology and English literature to design and creative and performing arts. The AHRC makes research awards every year ranging from individual fellowships to major collaborative projects as well as over 1,100 studentship awards. Awards are made after a rigorous peer review process, to ensure that only applications of the highest quality are funded.

BBC Television Arts produces 150 hours of programming across the BBC’s television channels including returning strands Imagine and Film 2013 on BBC One; The Culture Show on BBC Two and The Review Show, What Do Artists Do All Day, Mark Lawson Talks To... and Timeshift on BBC Four alongside numerous award winning landmark documentaries and series. www.bbc.co.uk/arts