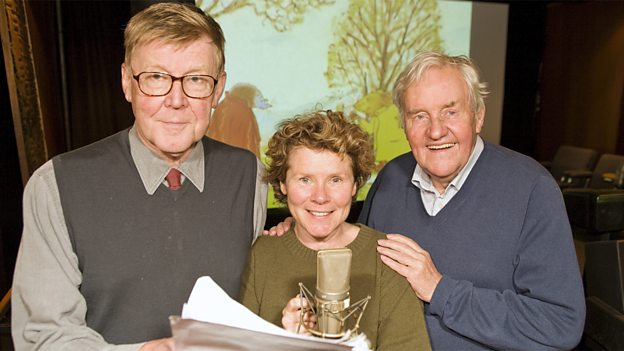 Mouse And Mole At Christmas Time is a beautiful animated version of one of the popular books by Joyce Dunbar, which is perfect family viewing."Kay Benbow, Controller, CBeebies

Category: CBeebies
Controller of CBeebies, Kay Benbow, has announced today that she is bringing the popular children’s characters of Mouse And Mole back to CBeebies for Christmas.

Mouse And Mole At Christmas Time is based on the original Mouse And Mole short stories which were written by Joyce Dunbar ﻿and illustrated by James Mayhew in the early Nineties. Some of the books were previously brought to screen in 1996 by Joy Whitby (creator of Play School and Jackanory) and proved popular with adults and children alike because the charm of the stories lies in the endearing friendship of the two central characters and the humour of their exchanges.

This festive film is voiced by three of the country’s best-loved actors. Richard Briers and Alan Bennett play the key roles of Mouse and Mole and Imelda Staunton plays a meddling shrew, who wreaks havoc in their normally peaceful home. Between them the three cast members also provide the voices for 14 other characters. The voice-over recordings were made a couple of years ago before Richard Briers sadly passed away.

Mouse and Mole live together in a little cottage in the country. Mouse is practical and cheerful while Mole gets into scrapes and needs mollycoddling. In this Christmas episode, Mouse and Mole decide to give a Twelfth Night party. There is snow on the ground as they deliver the invitations to their animal friends. Mouse makes a ‘Snowmole’ for Mole which comes to life in a dream and takes him to a land where his every wish is granted.

Kay Benbow said: “Mouse And Mole At Christmas Time is a beautiful animated version of one of the popular books by Joyce Dunbar, which is perfect family viewing. Children will love the gorgeous, playful characters of Mouse and Mole while parents will be delighted to hear the voices of popular actors Richard Briers, Alan Bennett and Imelda Staunton.”

Joy Whitby added: “Mouse and Mole has been a labour of love for over 15 years, starting with the production of 26 five-minuters and culminating in Mouse And Mole At Christmas Time. To get to this point we have had to face many daunting challenges - but faith and persistence have been rewarded. May the resulting film continue to delight viewers for years to come.”

Music was specially composed by John Baird, performed by the Allegri Quartet, and conducted by Ralph Allwood MBE.

Mouse And Mole is a co-production by Grasshopper Productions, Baird TV (part of Aquarium Studios) and Clive Juster & Associates. It is adapted and directed by Joy Whitby and animated by Laughing Gravy Media. The executive producer for CBeebies is Alison Stewart. This Christmas Special will be shown in December 2013 on CBeebies.