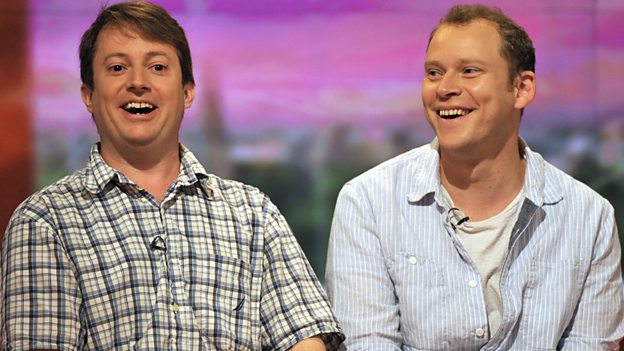 It's great to return to Radio 4 now that we're old enough to listen to it.”David Mitchell

Category: Radio 4
David Mitchell and Robert Webb are set to return to BBC Radio 4 this autumn for a brand-new series of the award-winning sketch show That Mitchell And Webb Sound.

Listeners are in for a treat as they return to the Radio 4 airwaves after a four-year hiatus, with their distinctive and lopsided views on the world through satirical sketches and surreal characters, on Tuesday 26 November at 6.30pm.

David Mitchell says: “It's great to return to Radio 4 now that we're old enough to listen to it.”

After some time away from radio sketches, the duo realised how much they had missed making the show, so they decided to get the old gang back together. “I love doing radio, mainly because you don't have to do the actions. David does the actions anyway and I respect his process. Although waiting for him to change costumes can be irksome,” joked Webb.

This fifth series will continue to see Mitchell and Webb writing in collaboration with some of the show’s previous trusted writers, including Mark Evans (Bleak Expectations) and Toby Davies, plus Joel Morris and Jason Hazeley (How TV Ruined Your Life, A Touch Of Cloth) are also on board. James Bachman, aka Bleak Expectations’ Harry Biscuit, will again be part of the cast and the duo are delighted that the fantastic Olivia Colman will be joining the fold once again. They will all be under the watchful eye of returning producer Gareth Edwards, who has produced all previous episodes of That Mitchell And Webb Sound and That Mitchell And Webb Look.

Caroline Raphael, Comedy Commissioning Editor for BBC Radio 4, says: "It’s always wonderful to see Radio 4 programmes and talent move to television. My parting words to David and Robert were – ‘the door is always open’ and here they are, back again and we are absolutely delighted, as I am sure the listeners will be."