Huge audiences for the first truly digital Glastonbury from the BBC 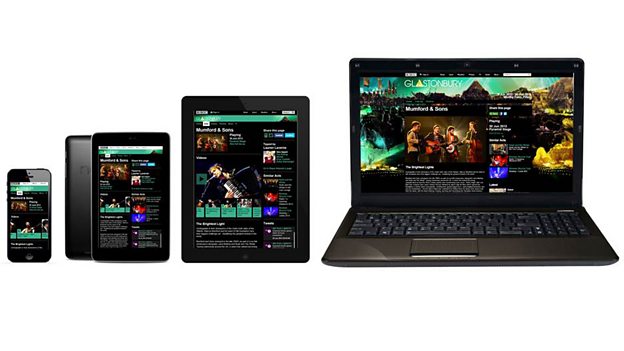 Record-breaking numbers of people tuned in to what has been our most comprehensive digital Glastonbury offering to date. This year, we gave our audience the opportunity to watch what they wanted, when they wanted and how they wanted. And they did.”Bob Shennan, Controller, BBC Popular Music

Category: Online and interactive
This year, the BBC brought audiences the most comprehensive digital coverage ever, with live-streams from the six key music stages, over 120 live performances and more than 250 hours of live coverage across multiple screens.

Bob Shennan, BBC Controller of Popular Music, says: “Glastonbury 2013 on the BBC has been outstanding. Record-breaking numbers of people tuned in to what has been our most comprehensive digital Glastonbury offering to date. This year, we gave our audience the opportunity to watch what they wanted, when they wanted and how they wanted. And they did.”

With over 6.2m viewers, the BBC’s reach on Red Button over the weekend was up by 77 per cent compared to the last Glastonbury festival in 2011.

A record 1.5 million unique browsers - an increase of 98 per cent from the last Glastonbury in 2011 - enjoyed coverage across PC, mobile, tablet and connected TV with:

Peak digital viewing across all four screens was from 10pm until 11pm on Friday as audiences tuned in to see Arctic Monkeys. Other peaks throughout the weekend included The Rolling Stones and Mumford And Sons.

This year was the first truly mobile Glastonbury with:

The Rolling Stones’ performance was the most requested Glastonbury programme with around 700,000 requests (TV and radio) - the most requests for any programme that day. The Arctic Monkeys were second with 379,681 requests on Friday and 163,650 requests for Mumford And Sons on Sunday.* (*These were the real-time figures for BBC iPlayer as of Tuesday, 2 July, 11.30am. The Arctic Monkeys performance has been available since the Friday evening, The Rolling Stones since the Saturday evening and Munford And Sons since the Sunday evening).

Viewing on YouTube also proved popular with 1 million views of all Glastonbury content via the BBC YouTube channel. Live online webcasts received around 1.5m requests. The Pyramid Stage was most popular with 635k requests.

On Connected TVs, live coverage and the webcast of the Pyramid Stage on Saturday (55,000 unique browsers) proved most popular, together with a clip of Jake Bugg’s performance of ‘Lightening Bolt’ which received 23,000 unique browsers.

The most social Glastonbury ever

The BBC ran a live blog, curating the best images and news stories from journalists at Worthy Farm. And, a dedicated @bbcglasto Twitter account answered audiences' queries, and shared the best tweets from the BBC’s DJs, presenters and radio/tv station accounts throughout the weekend. On radio and on screen, audiences were encouraged to share a #glastoshout with their names ending up on TV and on Twitter in front of, for example, iconic stages, Jake Bugg's guitar, Professor Green's arm or the BBC Three studio. Real-time images form the stages were also shared via instagram, and the BBC Glasto tumblr.

This year’s festival also brought international audiences to the heart of the action, broadcasting, for the first time, a bespoke six-hour Glastonbury spectacular over BBC Worldwide’s global channels to music fans as far afield as South Africa, Singapore and Colombia. The broadcast was carried by BBC Entertainment in the Nordics, Poland and South Africa, BBC HD in Poland and Turkey, and UKTV in Australia and New Zealand. It was simulcast on BBC HD in Latin America and BBC Knowledge in Asia as well as BBC Entertainment in both those markets. The special featured the highlights of some of this iconic British event’s most popular artists from Friday, Saturday and Sunday performances, including a live set from Mumford And Sons. It also featured bespoke links from the presenters Jo Whiley, Lauren Laverne and Mark Radcliffe introducing the festival to international audiences and explaining its history and background.

Even after the last revellers have departed Worthy Farm, the Glastonbury vibe will continue to be enjoyed across the globe with the highlights show due to be aired in hundreds of countries worldwide, including third party broadcasters in the United States, Japan, Spain, Holland, Brazil and across the whole of Latin America.