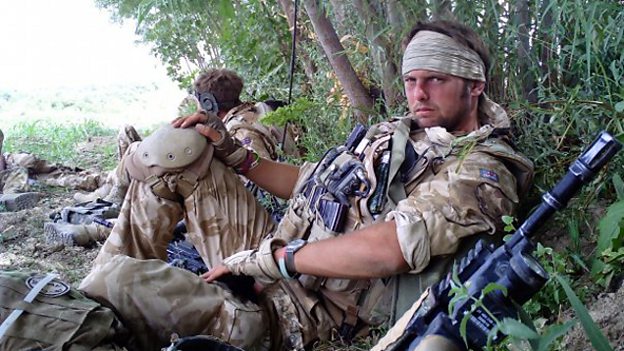 
The figure is much higher than the seven confirmed military suicides that the Ministry of Defence reported to Parliament last month.

As the MoD doesn’t track what happens to veterans, no one knows how many are suffering from Post-Traumatic Stress Disorder (PTSD) or have taken their own lives.

Colonel Stuart Tootal was the commander of 3 Para, the first battle group sent to Helmand province. He says the problem is underestimated: “… the evidence suggests there’s more of a problem than the government and the MoD are admitting to, but whether it’s seven or 50, the fact that even one individual takes their own life as a result of suffering from PTSD. That in itself is absolutely an avoidable tragedy and the government should wake up and do something about this.”

Broken By Battle – A Panorama Special will be shown tonight (Monday 15 July) at 9pm on BBC One. The programme spent a year analysing information from coroners, local papers and military contacts. Panorama also submitted a Freedom of Information request to the MoD which revealed that in addition to the seven suicides from last year, there are a further 14 cases awaiting an inquest where the facts indicate the person took their own life.

The Freedom of Information response also revealed that the number of soldiers diagnosed with PTSD after serving in Afghanistan has more than doubled in the past three years.

Lance Sergeant Dan Collins joined the army at 16 and served in the Welsh Guards for more than 10 years. His mum Deana says he wanted to join the army ever since he was a child.

“He wasn’t that interested in schoolwork because he always said I’m joining the army. I think he was about five or six. We went to the market and he saw an army uniform, you know, for children. And he kept on and on and on that he wanted this army uniform so we got it for him and I could never get the thing off him. That’s what he wanted to be was a soldier. He never changed his mind.”

In the summer of 2009, Dan fought in Operation Panther’s Claw in Helmand Province Afghanistan. He twice survived being shot and was blown off his feet by a roadside bomb. After seeing his close friend killed in front of him, his mum Deana noticed a change in him.

“The phone calls changed. And I remember him telling me, ‘Mum, this place is hell on earth. And I just want to get out of here’.”

After a six-month tour during which 81 British soldiers were killed, the Welsh Guards returned home. Dan’s girlfriend Vicky knew something was wrong.

“I started noticing things, just little things. Nightmares were the main thing. He shouted ‘Dane’ constantly, all the time. And every time I woke him up I had to reassure him and tell him everything was OK. It was pretty clear he was back there re-living everything.”

The army diagnosed Dan with Post Traumatic Stress Disorder. But he had to drive three hours to an army base to see a psychiatric nurse.

Vicky told Panorama: “The journey was more traumatic than the actual treatment. He used to come back worse than when he’d left. Every time he was going he was seeing a different person every time so he was having to start again. He probably saw the same person no more than three times. So it was doing more harm than good.”

After 10 months of intermittent treatment, the army told Dan he’d recovered and would soon be ready to return to duty. He tried to kill himself twice over the next few months.

Following an overdose of anti-depressants, Dan was admitted to an NHS psychiatric ward. As the army no longer has residential units for soldiers with PTSD, he had to be cared for in an NHS ward.

Vicky said: “He was put in an empty room for 20-odd hours a day and they would just dose him up with drugs. More anti-depressants, more Diazepam, sleeping tablets. Just on a regular daily basis, just more and more drugs.”

After five weeks in the NHS ward, Dan was released and moved back in with Vicky. His flashbacks began to get worse and he started missing his weekly NHS appointments.

On New Year’s Eve 2011, Dan left Vicky, put on his army uniform and the bandana he’d worn in Afghanistan, and drove into the Preseli Mountains.

He recorded a farewell video to his mother and hanged himself.

More than a year after Dan Collins died, there has still been no inquest. The inquest could not take place until the MoD finished its internal investigation, which it delivered to the coroner last week.

Deana Collins said: “You’ve got units for soldiers that are severely injured and they’re treated.  You should have a unit for treating soldiers with PTSD.”

Claudia Herbert is one of the UK’s leading PTSD experts, with more than 20 years’ experience of treating veterans. She told Panorama: “PTSD in itself should not lead to suicide. PTSD is a condition that indicates something has deeply disturbed the system… The longer the condition is left untreated the more complex the condition then becomes.”

Jason Rathbone served in Royal Artillery during the first Gulf War, and now runs a veterans’ charity. He holds a weekly support group for former soldiers struggling with PTSD. He told Panorama: “The MOD have behaved like a cheap insurance company. In battle we understand you can be sacrificed to win a war but the same shouldn’t be true on leaving the services. It’s pure dereliction of duty really. They’ve not just turned their back on us. It feels as though they’ve gone out of their way to turn their back on us.”

Ryan Ward was 19 when he went to Afghanistan last year. He was manning a checkpoint close to where Dan Collins fought, when an Afghan sergeant turned up at the checkpoint, saying he had a broken ankle. After a medic was called, the man was taken inside, where he pulled a gun from under his cloak and shot two of the soldiers.

Ryan’s father Richard told Panorama: “Our Ryan saw what was happening, shot the Afghan sergeant, knocked him off his chair. They all rushed in with their guns and finished him off.”

The army has a system called Trauma Risk Management or TRiM to identify soldiers at risk of developing PTSD after major incidents. Ryan was assessed within 72 hours and found to have no signs of trauma. According to its own TRiM guidelines, the army should have assessed him again after a month but didn’t.

Six weeks after the incident, Ryan returned home with his unit and went to his Sergeant’s funeral. The day after the funeral he hanged himself.

Three months after Ryan’s death an inquest was held. The coroner concluded that he couldn’t be sure why Ryan killed himself. The army argued that there was nothing to suggest Ryan was at risk.

Richard said: “Is it a coincidence that he took his life the day after Sgt Thursby’s funeral? Now come on. You don’t have to be a brain surgeon to work that out. That’s just not a coincidence.  He is a casualty of war. And I don’t think he’ll be the last either.”

The Ministry of Defence said it was not prepared to talk about individual cases but told Panorama: “Every suicide is a tragedy and our thoughts remain with the families of all those who have sadly taken their own lives. Suicide amongst members of the armed forces remains extremely rare. Rates of suicide and PTSD within the military are lower than comparative rates in the civilian population.

"We have committed £7.4 million to ensure there is extensive mental health support in place for everyone who needs it. We are committed to ensuring a smooth transition from the Armed Forces into the NHS. This includes improving the transfer of medical records on discharge to provide better continuity of care and providing mental health assessments prior to discharge."

General Richard Dannatt, Former Chief of the General Staff, said: "Now it can’t be beyond the wit of us in the second decade of the 21st century to put in place a monitoring process whereby a coroner has a duty when he records a verdict on a suicide case to have enquired whether this person had a military background and to have enquired whether they took part in combat. It’s pretty clear to me that it should be happening because once you have some statistics you can start to do something about it."

The families have now decided to petition the government, demanding changes to the way it deals with PTSD. They have asked them to reinstate residential units for PTSD victims, to ensure army medical notes are passed onto the NHS, to improve checks on veterans’ welfare and to change a culture in which soldiers are afraid to ask for help.

Broken By Battle – A Panorama Special will be shown tonight at 9pm on BBC One.