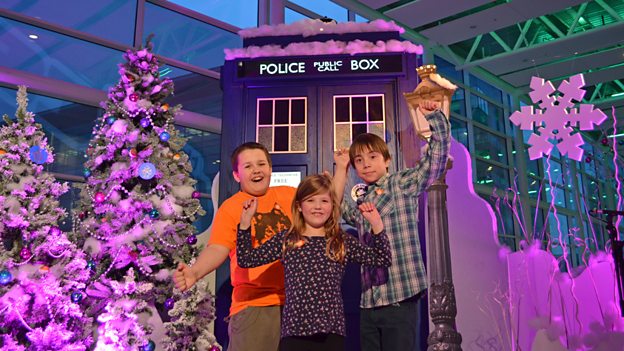 Category: CBBC
Blue Peter has today announced the winners of its exclusive Doctor Who competition, which challenged CBBC viewers to design brand-new sonic devices to be used in the forthcoming series of the iconic science fiction show.

Viewers aged between six and 15 were asked to design a new sonic device for either Sontaran Commander Strax, Madame Vastra or Jenny Flint - and the winning gadgets will feature in the new series which airs next year. More than 3600 young people entered for the chance to win the exclusive, once-in-a-lifetime prize.

The winners of the competition – which was launched to celebrate 50 years of Doctor Who - were 13-year-old Connor from Somerset, 11-year-old Arthur from Hampshire and 7-year-old Amber from Kent.

Connor designed a Sonic Gauntlet for use by Jenny Flint. His intricate gauntlet design included a tumbler to make locks fall apart, a radioactivity measurer and receiver dish and a watch that shows the conductivity of metal in a lock. Judge Steven Moffat said that Connor’s design was a multi-purpose toolkit that fits in your arm and can do a whole manner of things: “We love this because it looks really cool; it looks quite steam punk – it looks Victorian, but looks technological at the same time and I can just imagine Jenny Flint when she goes out in the morning needing something like that on her arm.”

Arthur’s design was a Sonic Lorgnette – a pair of handheld eyeglasses - for Commander Strax. It included an x-ray lens for seeing inside people and objects, a thermal lens for detecting people and a sonic light. Steven Moffat said that this was a beautiful design which was perfect for Strax: “You feel you want to pick it up and hold it, but it’s also about the other side of his life because – of course – Strax is a nurse and this allows him to examine his patients and see what’s wrong with them. I think it will be very funny seeing Strax’s big clumsy hands holding that.”

Amber’s winning device for Madame Vastra was a Sonic Hat Pin that works as a remote control for her carriage, but can also turn into a sonic sword that increases in size with the flick of a special switch. Steven Moffat said: “The Sonic Hat Pin is a glorious idea. It can actually summon her carriage just by plucking it out of her hat, and she can lock it as well. It’s funny, it makes absolute sense and it’s got a little dinosaurs feather in it, which sells it to me.”

The winners joined Blue Peter presenters Barney Harwood, Lindsey Russell and Radzi Chinyanganya in Salford as part of Blue Peter’s Christmas show which aired on CBBC today and will also be invited to Cardiff to see their devices being used on the Doctor Who set.

Today’s Blue Peter is available to view for seven days on the BBC iPlayer. For more information on Blue Peter and other CBBC shows, please visit bbc.co.uk/cbbc.