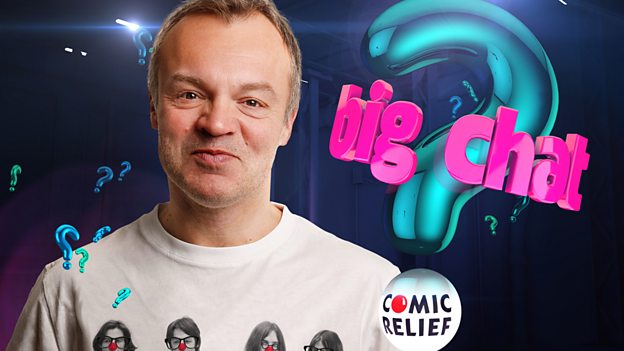 At 7pm on Thursday 7 March, Graham will be taking over BBC Three for the whole night to host the biggest chat show ever, which will last into the early hours of Friday morning as he attempts to set the Guinness World Record for ‘Most Questions Asked on a TV Chat Show’ - all in aid of Comic Relief.

In order to cope with the galaxy of stars in the studio, Graham will be assisted throughout the evening by a number of co-hosts; from chat-show veterans such as Sir Terry Wogan and Frank Skinner to BBC Radio 1 Breakfast Show presenter Nick Grimshaw, the co-hosts will ensure Graham remains on track to hopefully smash the world record and raise as much money as possible for Comic Relief.

In addition to all this, Greg James will be on-hand all night hosting the Big Chat Backstage Party, making sure that the guests are well looked after before they come into the studio for their interviews with Graham.

Viewers will be able to help Graham raise money for Comic Relief, by choosing to give either £5 or £10 and then texting FIVE or TEN to 70510. They can also help Graham break the world record by submitting questions for him to ask his guests via Twitter (@bbcthree #bigchat) or by visiting the BBC Three Facebook page (facebook.com/bbcthree)

Viewers can choose to donate five or ten pounds by texting FIVE or TEN to 70510. Texts cost £5 or £10 plus standard message rates. 100 per cent of every donation will go to Comic Relief. Text donors must be 16 or over and please ask the bill payer's permission.

Viewers can get involved by asking questions via Twitter (@bbcthree #bigchat) or they can send questions in via the BBC Three Facebook page (facebook.com/bbcthree).