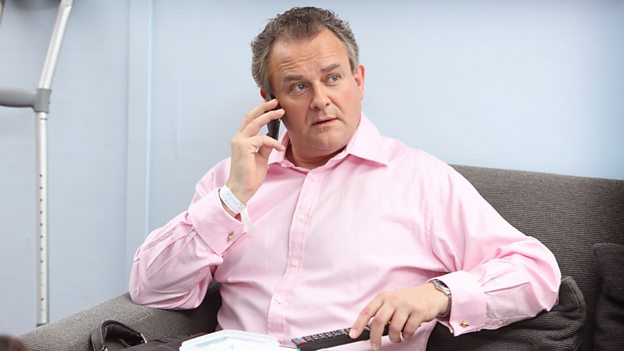 It isn’t a demolition job on anybody or anything, and it isn’t one giant in-joke, and this isn’t a game of guessing who is supposed to be who. If it is satirical then it’s satirical about an environment, an ethos, and the absurdities of modern corporate life itself."John Morton, Writer

Filming starts next month on W1A, which will see Ian Fletcher (Hugh Bonneville), ex Head of the Olympic Deliverance Commission, taking up his next big job – the (fictional) Head of Values at the BBC. His task is to clarify, define, or re-define the core purpose of the BBC across all its functions and to position it confidently for the future, in particular for Licence Fee Renegotiation and Charter Renewal in 2016 and 2017 respectively. Reith was then; this is now. The post is sold to Ian as a chance to influence and shape one of the great British institutions. His job is to think Big Thoughts, but it doesn’t him take long to realise that not only does he not have time to think Big Thoughts, he never has time to think any thoughts at all.

Although not a sequel to Twenty Twelve – W1A features new situations and new characters - it does share some of its DNA with Twenty Twelve and even follows the progress of Siobhan Sharpe (Jessica Hynes), PR guru behind the Twenty Twelve Olympics.

Writer John Morton says: “It isn’t a demolition job on anybody or anything, and it isn’t one giant in-joke, and this isn’t a game of guessing who is supposed to be who. If it is satirical then it’s satirical about an environment, an ethos, and the absurdities of modern corporate life itself. The key principle is to operate at a level of reality just to the left or the right of fact, to create stories that haven’t actually happened but that could happen or might have happened.“

Janice Hadlow, Controller of BBC Two, says: “Twenty Twelve was one of BBC Two’s stand out comedy hits last year and I’m absolutely thrilled that John Morton and the fantastic off-screen team are coming together again as well as some of our most loved characters from the first series.”

Mark Freeland, Head of BBC In-house Comedy, says: “This is a kind of love letter to the BBC. But a letter that gets mislaid, because the remote computer system is not working and Head of Recovery, BBC, is stuck in a blue sky brainstorming session in a meeting room that's been double booked and anyway, the bean bags have gone missing.”

W1A is written and directed by John Morton (Twenty Twelve, People Like Us), produced by Paul Schlesinger and executive produced by Jon Plowman, the team behind the Olympic hit Twenty Twelve. It is a BBC In-House Comedy production commissioned by Janice Hadlow, Controller of BBC Two, and Shane Allen, Controller of Comedy Commissioning. There will be an initial run of 4x30-minute episodes to be screened in 2014 on BBC Two.

A spokesperson for Tony Hall, Director-General of the BBC says: “In a divergent, 360 degrees, flexi-content, on-demand marketplace, this is just the kind of connected proposition that the BBC is prioritising…..what is it…??”