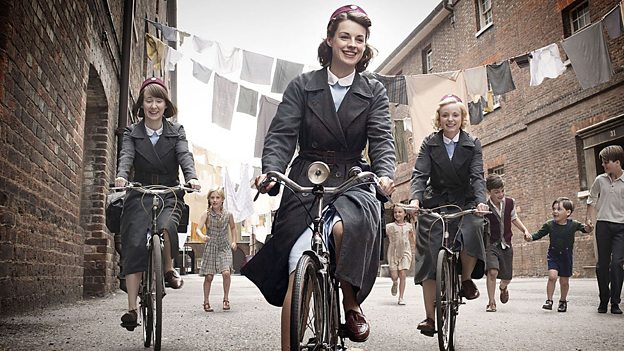 Call The Midwife has been a phenomenon that has won the hearts of the nation, with last night’s finale delivering a series high making it the biggest new BBC One drama on record!"Ben Stephenson, Controller, BBC Drama Commissioning

Category: BBC One; Drama
BBC One ratings hit Call The Midwife ended on a series high last night with 9.2 million viewers tuning in to watch the final episode, resulting in a series average overnight of 8.7million which makes it the biggest new drama series on the channel since records began (in 2001).

Written by Heidi Thomas and made by Neal Street Productions, the dramatic series climax saw much-loved Chummy played by Miranda Hart marrying PC Noakes, despite her mother’s intervention and found Sister Monica Joan in the dock for stealing.

Commissioned by Danny Cohen and Ben Stephenson, the eagerly anticipated second series will return next year to BBC One on Sunday nights.

Danny Cohen, Controller BBC One, says: "Heidi Thomas and Neal Street have brought a new kind of grit and risk to period drama. It's been wonderful to see viewers respond so warmly - and in such large numbers - to this world of babies, nuns, and extraordinary women."

Pippa Harris, Executive Producer, Neal Street Productions, says: "We've been thrilled and overwhelmed by the success of Call The Midwife. It's fantastic that the series has been embraced so warmly by millions of viewers, and that the show's blend of heartfelt drama and humour has struck a chord with so many. It's a much deserved tribute to Jennifer Worth and I'm only sorry that she isn't with us today to share the joy. I know she would be delighted."

Writer Heidi Thomas says: "When Jennifer Worth was dying, I took her hands in mine and promised I'd do everything in my power to make her books sing as a drama. She will be looking down now from the heaven she undoubtedly believed in, and smiling. That means more to me than I can say."

Ben Stephenson, Controller, BBC Drama Commissioning, says: “Call The Midwife has been a phenomenon that has won the hearts of the nation, with last night’s finale delivering a series high making it the biggest new BBC One drama on record! My special thanks go out to the late Jennifer Worth, the brilliant Heidi Thomas and Neal Street Productions.”

Call The Midwife is the biggest new drama series on BBC One under the current measuring system (going back to 2001). The series average in overnights is 8.7m/29.6% share.