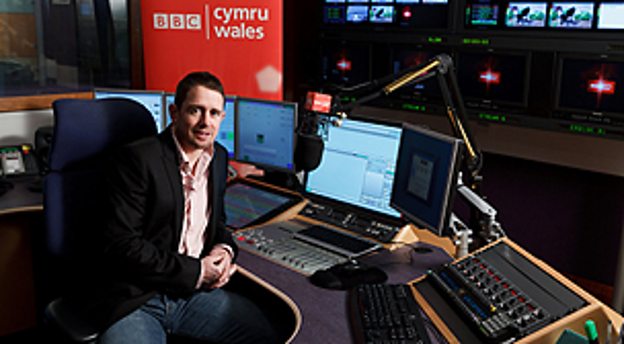 The world renowned rugby player, who joins the team for BBC Cymru Wales’ coverage on S4C for the Ireland v Wales and England v Wales games in the Six Nations, will be providing the links between a special evening of rugby flavoured programmes on BBC Two Wales.

Shane came into the BBC Cymru Wales studios in Llandaff, Cardiff on Monday to pre-record the special links. BBC Wales’ presentation manager, Matthew Rosser, took Shane through the finer points of being a TV announcer.

“Working with Shane was a pleasure,” says Matt. “To say it was the first time he had linked programmes he took to it all really well and I think the viewers will enjoy hearing Shane taking the helm of BBC Two Wales on Friday night.”

The evening kicks off with live coverage of the Ireland U20s v Wales U20s Six Nations game in Scrum V Live from 7pm, then at 9pm Shane introduces a special documentary with the rugby legend looking back at his rollercoaster rugby career in Shane. The evening rounds off with Jason Mohammad with Sport Wales from 9.30pm.

This week Sport Wales includes reports from the Wales and Ireland camps ahead of Wales’ first game in the 2012 Six Nations on Sunday. Jason talks to Wales’ captain Sam Warburton, there’s an interview with Ireland international Shane Horgan plus the studio guest is former Wales captain Gwyn Jones.

There will also be a profile of former volleyball player Mark Colbourne from Tredegar, who is now a member of Team GB’s para-cycling team and is tipped to win gold for Great Britain at next week’s Para-cycling World Championships in LA.

The evening will run as follows