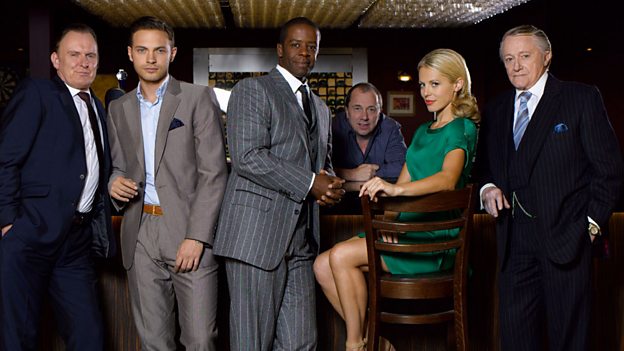 Category: BBC One; Drama
Jaime Murray returns as Stacie Monroe in the last series of Hustle.

What was it like seeing the old gang again?

From the offset, when it was suggested to me, I knew it was something I wanted to make happen. I love the cast and crew on Hustle and it was my first big job. They were like family to me and really looked after me, I didn’t know which way was up when I started that job! The boys were really supportive and I learnt so much from them so I was very excited to go back and see them all.

Have you missed playing Stacie?

I feel deep affection for Stacie. The great thing about playing her was that I couldn’t get bored because she was always taking on other characters. It was joyful to go back and resurrect the character.

Who is your favourite grifter?

How can I choose between the boys? I always found Danny Blue very funny, and we had great chemistry. But Ash gets to pull out the most fabulous characters and I love Robert Glenister, we have good banter. I adore all of them but the role of Ash requires such great characters, because of what he has to facilitate, and he pulls it off every single time. He gets that great balance of it being totally believable and humorous, without being ridiculous.

How was it filming with Kelly Adams and Matt Di Angelo, the new crew?

They were so welcoming. They had such a great vibe with the rest of the crew, it was incredibly relaxed. The crew were a big part of my life and evolution as an actress, and they have also worked with them as long as I did, so it felt like I’d known them for ages. They’re just as close to the boys as well, so it definitely felt like I knew them already.

Did you and Kelly fight over outfits?

Iain Macaulay, the Costume Designer, was there when I was originally on the show and he came back for this season too. He made both characters quite different stylistically, so there was a lot of complimenting but no fighting!

Will there be any tension between Stacie and Emma/Mickey?

Before I read the script, I thought there might be some tension, but the plot moved so fast and there was such a great story to tell that the women didn’t need to be giving each other sidelong glances. The history in those relationships is still acknowledged and shown though. It’s a shame in TV and film when you have two great, strong women characters and they are pitched against each other. I was really glad that didn’t happen in this episode. I don’t think it’s interesting any more, we’ve moved on from the 80s with Dynasty to more female power! Women supporting other women should be celebrated.

How was your week of filming?

It’s been five years since I was last on the show and within five minutes they were teasing me as if it was yesterday. They’ve known me since I was 24 and so treat me like a little kid, which I love! Matt Di Angelo is so funny and cheeky, he’s such a clown. He made me giggle the whole time and I told him he looks like a young Jude Law, which he loved!

The Hustle gang has evolved naturally over five years and their children have really grown up. It was very poignant for me and a nice marker. It was a meaningful reminder to focus on what I’ve achieved and look towards what I want from the future. I was reminded about the passage of time, which wouldn’t have happened if I’d never left.

What can you tell us about the final episode?

Stacie has been out there, doing her own thing and chasing her own dreams, but it’s all for one and one for all when they’re together. She comes back to see the gang but gets caught up in an opportunity en route. This episode is the biggest con they’ve ever done, the con to end all cons. She’s instrumental in making it happen but, because she’s working the inside, she is aware of how dangerous the con is. Stacie is conflicted because Mickey really wants to go for it but it could bring real danger for the gang. She’s torn between facilitating the con and protecting the group of people she loves.

If you could have written the ending, what would you have done?

I was always stunned at how Tony Jordan managed to pull out more and more twists and turns and kept the plots fresh. He has kept the stories innovative and exciting throughout the last eight series. I could never think of a new way to end the show as he’s such an amazing talent. I would have liked to explored the relationships a bit more but there are so many stories to tell perhaps we needed a two-parter or spin-off show to tie up all the loose ends!

How would you sum up what the Hustle experience has meant to you?

Hustle was my first acting job and was where I learnt the ropes. It’s always going to have a special place in my heart. It was the beginning of my career and I was lucky enough to have four wonderful men in my life who were generous and kind and such consummate professionals. It stood me in good stead and showed me how it should be done. Hustle has set that benchmark for me. I can’t imagine not having had that experience and don’t know where I would be today without it. I was very lucky and feel sorry for others who didn’t have that experience!

What else can we expect to see you in?

I’m doing some TV shows in America; Warehouse 13, Ringer (with Sarah Michelle Gellar) and The Finder (a spin-off of Bones). Hopefully some of them will be shown in the UK too.