Providing a platform for Voices From Palestine 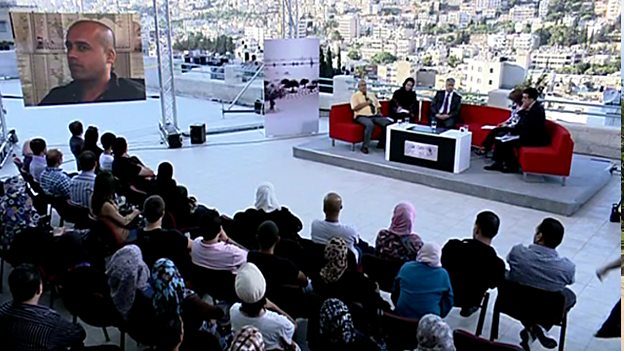 The quarterly TV show is produced by BBC Media Action in partnership with the Palestinian Public Broadcasting Corporation (PBC) and co-hosted by BBC Arabic’s Nur Zorgui and the PBC's Huda Kadoumi.

It enables people across the Palestinian Territories and the diaspora to question their leaders and hold them to account on issues that matter to them, from unemployment to the stalled peace process.

Audiences from around the Arab world are also able to participate through social media networks such as Facebook. The programme is streamed on the BBC Arabic and PBC websites, and aired on both their radio stations.

A second monthly show is also produced by the PBC. Hur el Kalam which means 'free to speak', travels around the major cities and towns of the Palestinian Territories, while audiences from the diaspora community and Gaza contribute via satellite, Skype, social media and phone.

The pilot episode of Voices From Palestine, recorded in the northern city of Nablus, brought an audience of around 80 people together with the Palestinian Authority’s Minister of Labour, a Fateh member of the Palestinian Legislative Council and the Director of the Nablus branch of Al Quds Open University.

When the Minister for Labour recommended that young people choose their studies after researching the labour market, a young woman responded by saying,"I have a Bachelor’s degree in nursing and one in business administration and I can’t find a job! Your Excellency, please tell me what sort of education I should get so that I can find work".

While phone-in TV shows are popular in the Palestinian Territories, this is its first ever televised debate where people will have face-to-face access to politicians, community and civil society leaders. The shows tap into the high use of social media in the region to continue the debate between broadcasts, gather suggestions for debate topics and select the audience, which reflects the diversity of Palestinian society.

LED screens are used by the presenters of the shows to talk about social media contributions during the programme and all episodes are uploaded on Facebook, YouTube and both the BBC Arabic and PBC websites.

Support behind the scenes

Walid Batrawi, Director of Projects at BBC Media Action in Ramallah, says that the benefits of the show extend far beyond audience participation in a single episode.

"When the audience arrives, every person will be asked to write down a question and we will discuss as many as we can," he explains."But this is about indirect as well as direct engagement. We are raising important issues that are on people’s minds and raising awareness of other issues. We are letting people know that their opinion counts, that their voice is worth listening to."

And what goes on behind the scenes is equally important.

Training teams from BBC Arabic and BBC Media Action have come together with PBC to develop the programme, and the broadcaster has been equipped with new technology for recording and editing. 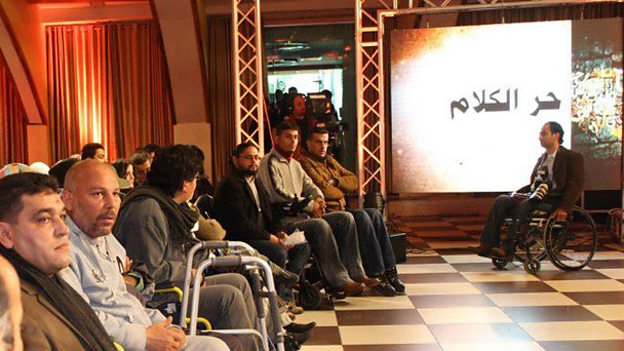