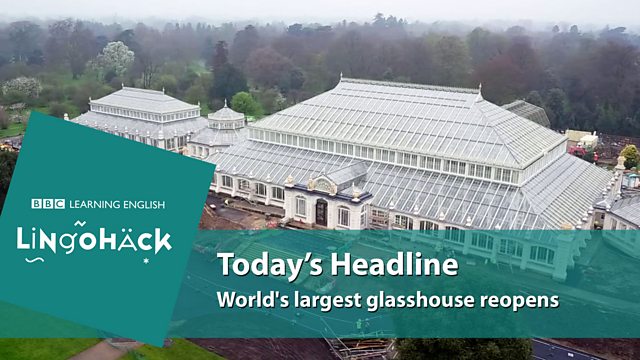 labour of love – hard work that is enjoyable and worthwhile

stripped back – reduced to its basic form

bare metal – basic hard and shiny chemical element, such as iron, which has not been painted

When did the Temperate House at Kew Gardens originally open?

Five years, 15 thousand panes of glass and more than five thousand litres of paint: the restoration of the world's largest Victorian glasshouse has been a labour of love.

The garden inside this vast greenhouse is a snapshot of the life that grows in temperate climates all around the world. And for many of these plants, this is their only refuge.

Among the greenery are species that harbour natural medicines now used to treat potentially lethal diseases, including malaria. And in his first visit here, Sir David Attenborough highlighted the importance of Kew's scientific work, learning how to protect plants from which we still have so much to learn.

Sir David Attenborough, British naturalist
It's here that people come and study these consequences of not only diseases but invasive plants. Plants that can come in and be more vigorous than some of our native plants and drive them to extinction. So that kind of ecological, botanical knowledge is of extreme importance. And this is one of the great centres for it.

For the first time since it was opened in 1863, the house was stripped back to bare metal. Every part of its structure has been examined in detail. This was a painstaking refurbishment of a national treasure.

Georgie Darroch, Project co-ordinator, Kew Gardens
The Temperate House is the largest surviving Victorian glasshouse in the world. So, for Kew, this was a hugely important project, both to bring these plants back to their home but also to restore this building back to its beauty and its absolute architectural brilliance.

Open to the public once again, this great building is fulfilling its original Victorian purpose - providing a home for some of the world's most precious plants.

When did the Temperate House at Kew Gardens originally open?

This restored greenhouse is now home to a collection of 10,000 plants from temperate climates around the world. These include some of the rarest and most threatened specimens, for which the botanic garden is a final refuge.