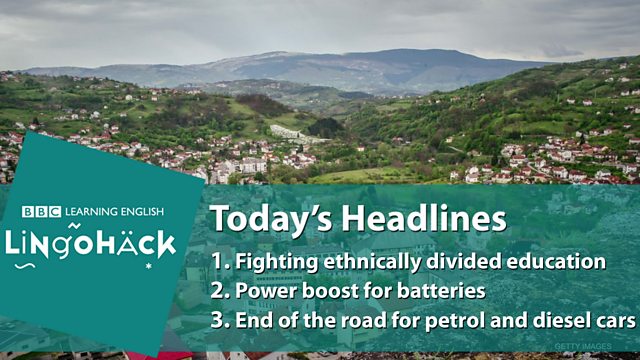 End of the road for petrol and diesel cars

The frontline is the classroom. Under local government policy many schools are segregated according to religion. 17-year-old Nikolas Rimac led his fellow students on a campaign against the segregation of his school. Eventually the regional government backed down - the students won. Nikolas and his fellow students now plan to fight segregation in 57 other schools in their region.

From obvious things like our phones, to London's new whispering black cab, to this experimental aircraft – battery power is taking off around the world. The problem is they still run out too quickly, so today the government's promised to invest millions improving the technology. Right now, Britain is a front-runner with battery research, like here at Warwick University where they're trying to solve the two biggest issues: making batteries weigh less and last longer.

We’ve come a long way in terms of design, but for a hundred years we’ve been relying on vehicles with an internal combustion engine burning petrol or diesel. Several major car makers have already announced ambitious plans for electric cars, seen as a key way of tackling air pollution. And now the (UK) government is signalling the end of petrol and diesel engines in the UK with a ban on sales by 2040.

segregated
separated according to race, sex, or religion

vehicles
machines, usually with wheels and an engine, used to move people or goods, mainly on roads

1. Environmental groups say it's time to get rid of all _________ for the benefit of health and quality of life.

3. A bathroom suite on wheels and a motorised garden shed are among the wacky _________ on show at a new exhibition at the National Motor Museum.

1. Environmental groups say it's time to get rid of all internal combustion engines for the benefit of health and quality of life.

2. The refugee camp is segregated with men on one side and women and children on the other.

3. A bathroom suite on wheels and a motorised garden shed are among the wacky vehicles on show at a new exhibition at the National Motor Museum.

4. With all her skills and experience, she is clearly the front-runner for the promotion.